Bitcoin and cryptocurrency success stories are popping up everywhere these days; you just can’t escape them. The blockchain foundation of these currencies is a revolutionary method of record keeping that is changing financial landscapes and developer MyDream Interactive is bringing the blockchain concepts to the gaming space with their new free to play title, AllMine. This blockchain-based 3D puzzle game will introduce concepts of cryptocurrency mining through the lens of cute creatures known as Adoraboos and their worlds called Utopias.

In AllMine, there is a new form of cryptocurrency called Jewelz. This form of cryptocurrency is used in-game to purchase aesthetic upgrades for your character and gameplay experience. Players can earn Jewelz through playing the game and completing puzzles or by running the Jewelz mining client on their device.

The Jewelz mining client is a lightweight application that can be used by any player regardless of their PC setup. Allison Huynh, CEO and founder of MyDream Interactive, went on to state, “We decided to create Jewelz to enable anyone, regardless of their access to computation power, to participate in cryptocurrency mining.” This is attained by a patent-pending Serial Proof of Work algorithm that is incredibly energy efficient when compared to standard Bitcoin mining, and can run on most machines without excessive noise or overheating. 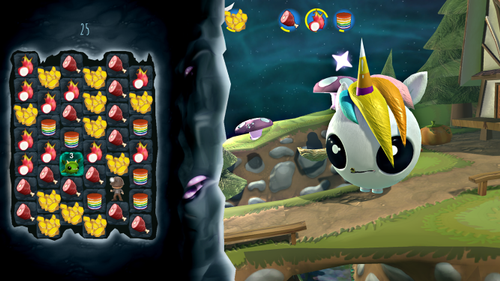 The usage of the Jewelz currency won’t be limited to just AllMine either. Huynh intends to continue development of new games that utilize the currency to, “teach children basic economics, mathematics, and cryptography principles”.

Gameplay wise, AllMine appears to be a standard match 3 puzzle title similar to Bejeweled. The cute characters and whimsical art are set dressing for the mechanics that lay underneath and act as a vehicle for the launch of a new crypto coin. Obviously, Jewelz will act as a learning tool more than a legitimate financial option, but this is the perfect way to teach cryptocurrency methods to the previously uninitiated. Hopefully AllMine and Jewelz will break down much of the mystery that surrounds the crypto market when they officially launch on PC later this year.