Get your sheepskin coat ready.  You can now lead your favourite football team to glory home or away on Nintendo’s flagship system.

Sports Interactive and Sega Europe have teamed up once again, this time to transfer Football Manager Touch to the Nintendo Switch.  It’s available now as a digital purchase from the Nintendo eShop.  They’ve had help too; sister studio Hardlight (the team behind Sonic Jump and Sonic Dash) have helped out from a technological standpoint to integrate the game seamlessly for the Switch.

Football Manager is the behemoth footy sim, putting you in the hot seat of any club in more than 50 countries across the world.  If you’ve ever dreamed of managing your favourite football club, you have the chance.  It’s hugely entertaining and so realistic that in real life Sky Sports uses their player stats in their football coverage, and clubs all over the world actually use it as a scouting tool.  Football club chairmen the world over have received applications for jobs from players whose only management experience comes from playing the game. 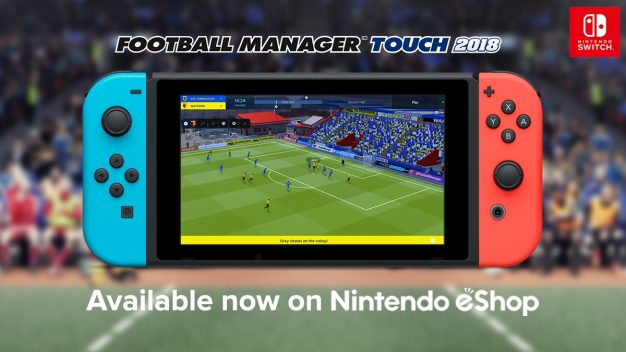 It’s something of an unexpected move by Sports Interactive, the studio behind the hugely popular football management simulator.  For years now there has been a swell of gamers wishing that the game would be released on console, only to have their hopes dashed.  So far, it has been PC/Laptop or mobile devices, and even that has only happened recently.

However, it makes sense that their first move into console gaming for this massive title would be the Nintendo Switch.  It takes advantage of the Switch’s touch interface, making a port of the mobile version of the game a lot easier.  Don’t be fooled though, this isn’t a like-for-like substitution.  There has actually been a lot more work put into this port to help it take advantage of the other control elements of the Switch.

Football Manager Touch has been fully optimised for the Switch with a bespoke user interface and a customised control system that takes full advantage of the system’s various controller input options, including support for both the touchscreen and Joy-Con™ controllers.  This gives fans a unique Football Manager experience that can be played on the move or docked at home and enjoyed on the big screen.

In addition, Football Manager Touch on Switch will offer a fully-fledged single-player experience including the series’ acclaimed 3D Match Engine – the first time that the 3D engine has been playable on a home console.

It has been a challenging port as Miles Jacobson, chief of Sports Interactive, explains: “It’s been a huge technical achievement to bring Football Manager to the Switch but, as a studio, we’ve embraced the unique design opportunities that the console offers. Thanks to the support we’ve had from Hardlight throughout the development process we’ve been able to create a Football Manager experience that is just as immersive and enjoyable whether you’re managing on the move during your commute or playing it on your TV.”

Jacobson is as excited about this release as us footy fans are.  “This is a milestone release for Football Manager.  This is our first console release in a number of years but it is also our most innovative release of Football Manager Touch to date thanks to the various control methods we’ve included that gives everyone a way of playing Football Manager that suits them.”

Football Manager Touch on Switch includes the same feature set as the tablet version of the game.  It’s not as fully-featured as the full laptop/PC version, but it’s perfect for casual gaming which is why it makes sense for Switch’s latest signing.