In today’s current gaming landscape, it’s not unheard of for a small team to come together to make something that pops off the screen; something that truly impresses you in the way a large developer can. When I say this, I’m talking about developers like SpaceCan Games and their first PC game Juicy Realm. SpaceCan Games is a simple two man team consisting of app developer Tyreal Han and artist/composer biboX. Juicy Realm is a twinstick shooter roguelike that pits human against fruit in a zesty dystopia. 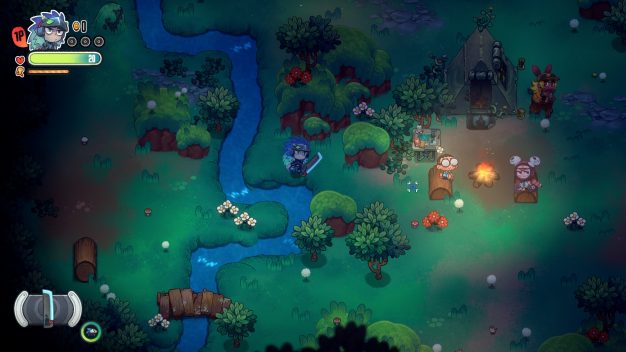 In Juicy Realm, players pick one of four fruit hunters each with their own stats, gear, and special ability. This fruit hunter is then taken across several procedurally generated boards, taking down enemies such as grape attack dogs, apple shotgunners, avocado bombers, and so much more. The enemy design and variety is really one of the games best features and gives each board a unique challenge.

The art and effects of Juicy Realm practically pop off the screen and would not look out of place in a Saturday morning cartoon. The vibrant colors and fluid movement gives the world a more genuine feel and is a real treat to experience firsthand. Each area has a crafted aesthetic and suits the type of jolly, fruity dystopian future that the game so easily captures and plays off. 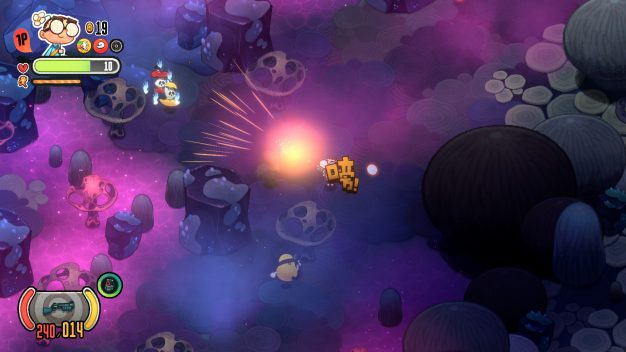 Eventually, after passing through enough these areas and small enemies, the player will come to a boss fight. Such as a gigantic watermelon, or a cake covered in knives that also shoots lasers. These bosses are a spectacle and have a unique, fun designs. However, there are only a small number of bosses that make an appearance and they seem to be in the same order every run. This puts a damper on the variety the game could potentially offer. It also makes the roguelike qualities feel significantly less roguelike in their predictability.

In addition to each boss being in order, each boss has their own “zone”. Meaning that each boss has a type of terrain in the areas leading up to it; a forests, desert, snowstorm, and so on. Each type of terrain is artistically well done and feels amazing in its own right, but it leads back into the lack of variety fault that is really off putting in a roguelike. In the hours I put into Juicy Realm, I felt like I was going over the same areas in the same basic order over and over and over again. 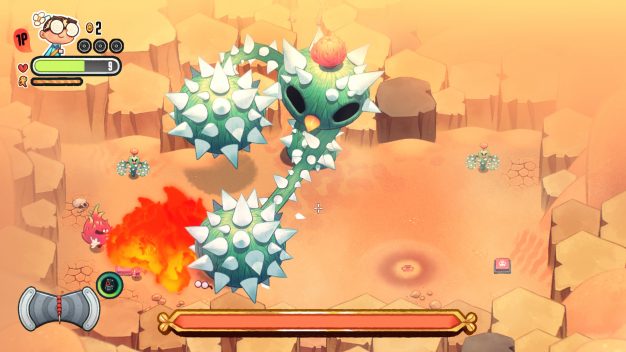 The combat in the game did little to alleviate the feeling of monotony. While there is a wide assortment of wonderfully irreverent weapons, such as a rubber chicken that bawks with each swing or a keyboard gun appropriately titled the GG, they all ultimately feel the same. Every weapon can be sorted into one of two categories, melee or gun, and they all control the same with only slight stat changes differentiating them. There’s also collectable money from enemies that can be exchanged for ammo, food, or other slight stat boosts, but they played so little into the overall gameplay that it doesn’t serve any purpose.

While the lack of variety is a bit of a disappointment, it fits the game as the length of Juicy Realm is incredibly short. After finding a good balance of your personal skill and the right difficulty, a single run of the game can be completed in under 2 hours. You can always choose a different character to do a run with or up the difficulty, but ultimately the experience will be the same. To alleviate some of the monotony in the level design, you can play Juicy Realm with a friend which makes the game significantly easier and injects some fun that co-op modes can always seem to illicit. 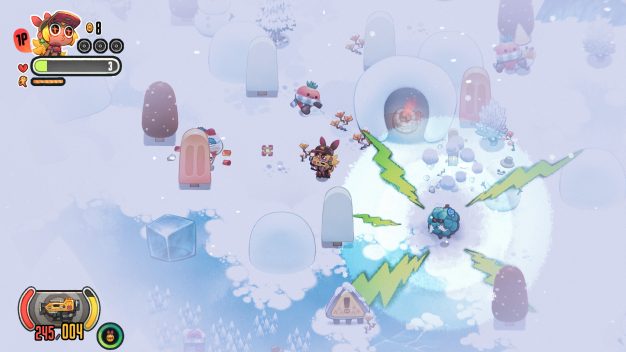 As far as roguelikes go, Juicy Realm doesn’t exactly reinvent the wheel. It quickly establishes itself with its striking art style and fresh premise, but fizzles out rather quickly. In broad strokes, Juicy Realm knows what it wants to be and what it wants to accomplish, but somewhere in between the lines those philosophies are lost. The game is far too linear and lacks too much in the variety department to be a true roguelike. Items and equipment are abundant, but feel too similar to really make a difference in a run. In short bursts, Juicy Realm scratches the itch, but in an extended session an average player will wish for more.

When Life Hands You Lemons