For some, indie game development has become synonymous with the Metroidvania genre. If you hurled dart at a giant list of game releases from the past six years, there’s a 60% chance it would land on a 2D indie Metroidvania title. This saturation is the primary reason why Omega Strike, from indie developer Woblyware, feels so disappointing.

Omega Strike is not a bad game. The platforming is solid. The art design and SNES-era story feel goofy and nostalgic. The zones of the world are actually designed instead of procedurally generated, which is an achievement in and of itself. But when you’re in the shadows of fantastic games in the same genre as Hollow Knight, Sundered, Axiom Verge, Steamworld Dig 2, and so many others, your game has to have something really special to stand out. Unfortunately, Omega Strike falls short. 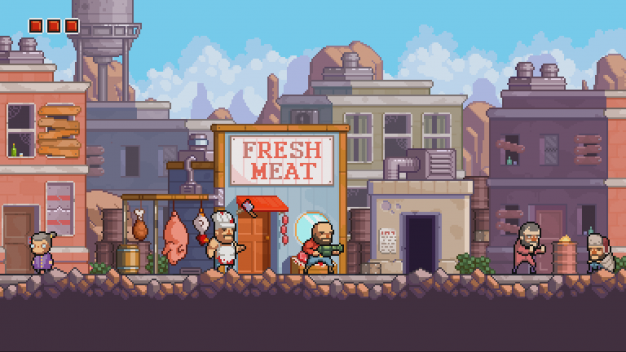 In Omega Strike, your goal is to defeat the evil mutant armies of Doctor Omega by exploring the world, upgrading your arsenal, unlocking abilities and generally shooting everything that moves. Players control one of three characters -Sarge, Bear and Dex -on screen, but can hot-swap instantly between them by pressing Y. Each character has access to specific abilities for combat and navigation so you will find yourself constantly swapping between them to get around. Dex, for instance, is the only character that can double jump to reach high places, while Sarge can tuck-and-roll through tight gaps. 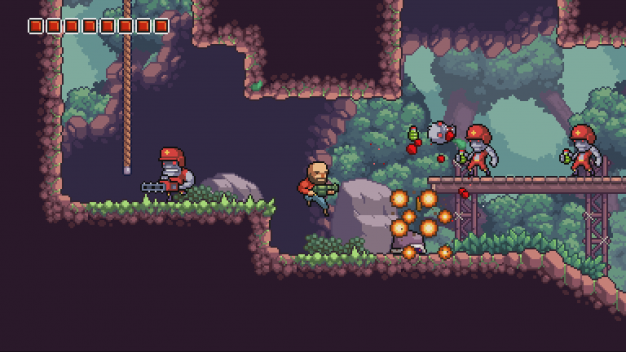 There’s plenty of zones to explore, but each zone feels entirely too large and fairly uninspired. There were several times during the playthrough where I checked the overworld map not to see where I was, but to estimate how much more time I’d be spending slogging through the zone until I found the next boss. The boss battles also leave a lot to be desired. Every boss has about two to three patterns that are repeated with little variation, so the only times I died were from timing a double jump to avoid an attack then realizing too late that I was using Bear instead of Dex. 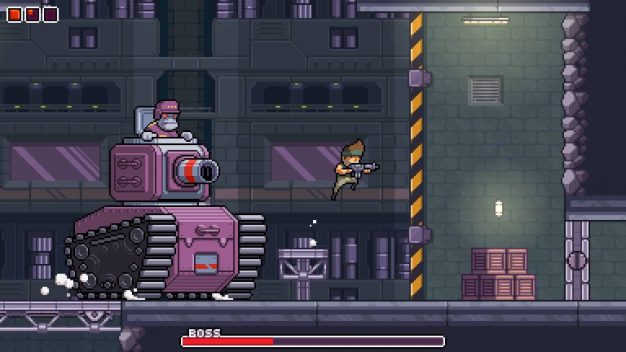 I wish I had more to say about this game, but after forcing myself to play this 10-hour title to completion, there isn’t much else to say. Though the graphics, music and platforming is serviceable, it also isn’t memorable. Omega Strike is a by-the-numbers Metroidvania title that feels six years too late.

More of the same Metroidvania

In an over saturated genre with high-quality titles, Omega Strike offers a by-the-numbers Metroidvania experience that fails to stand out.