I can tell you from personal experience that being hit by moving vehicles is not a great life choice. You hear the screeching of tires, the blast of a car horn and the next thing you know, you’re looking after a run-down graveyard with little more than an alcoholic talking skull, underpaid donkey and miserable ghost for company. Okay, maybe that goes a tad beyond personal experience – in reality I just wound up with sore legs and a headache – but it’s exactly what happens to you in Graveyard Keeper, the title we’re going to be looking at today.

In Graveyard Keeper, you’re working in a pretty rundown graveyard. You’re not dead – which is a plus  – but you realize pretty quickly that the only way you’re going to be getting home is to do a successful job of turning a burial ground full of miserable spirits into a place people might actually want to be interred. To do this, you’re not only going to have to repair your environment – a task that is absolutely easier said than done – but also help out the local villagers. Making an already pretty morbid job worse, you’re also being brought bodies to bury. In addition you can’t just chuck people anywhere, you have to make them happy. It would seem that everyone is a critic, even in death.

I’d love to tell you that I know exactly where the story is going with this one and that I’m miles into the game. Sadly, I can’t, and it’s not for want of trying. In Graveyard Keeper, as in many games, you progress by completing various objectives. These mostly involve ensuring your graveyard is looking top notch, burying the dead after autopsy and completing jobs set by characters in the game. This is where things become tricky. In Graveyard Keeper you have to teach yourself to do everything. 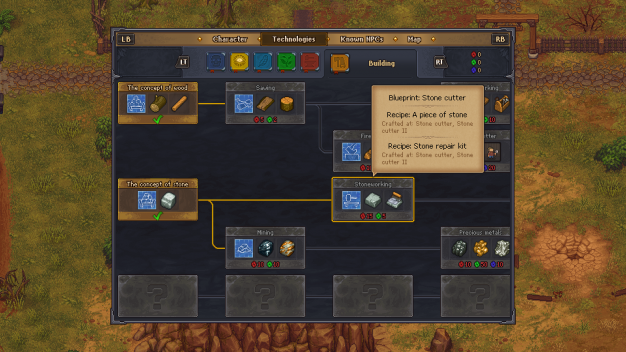 Everything is a learning process. Just like in life really.

You need to be a smith, a carpenter, a farmer and much more and to complete the goals you are set you have to have learned various technologies. To give you an example, there’s a character in the game who will teach you a cake recipe if you bring him honey. To do this you obviously need bees, but you won’t get bees until you’ve fixed a rundown apiary. To do this you’ll need wooden planks, nails, etc. Each and every one of these elements requires you to have learned something new. Every objective is different and all of them involve a series of logical steps. This is where the problems come in.

Logical steps are only logical if you know exactly which order they need to be performed. This is not a game that will tell you what you need to do as you go about doing it. There is very much a sense of, “We’ll tell you what we want from you, then you can figure the rest out for yourself.” This is what makes this game one of the most equally fun and frustrating experiences I’ve had in some time. I know exactly what I need to do. If I’m going to make stone gravestones I need stone, so I need to be able to extract this from rock. That’s fairly easy. Then I need a stone cutting platform. This is less so because that means I need to build the bloody thing and have all of the correct tech in place before I can begin. You can buy needed materials from the local village but this is an expensive process and you don’t get a lot of money.

You make money by selling burial certificates which come fairly easily. The rest of your funds are made through trade. You can sell bread and other food stuffs you’ve cooked or barter fresh fruit and vegetables. To do this, however, you need to know the recipes, how to gather the ingredients and if your farming where to get seeds and how to make things grow. Literally everything you do in this game is learned and nothing is just given to you.

The basic ethos of the game makes progression exceptionally slow unless you know exactly what you need to do next. Another point that I’m going to tack on here is that because you often find yourself trying to complete a zillion jobs at once you’re inventory fills up really quickly. You get trunks dotted about your home, the graveyard and other work areas. You’ll need to use these properly and remember what’s in them. Keep your ingredients in the kitchen, for instance, your crafting materials in your yard and so on and so forth. If you start just dumping things anywhere you’ll only confuse yourself further. 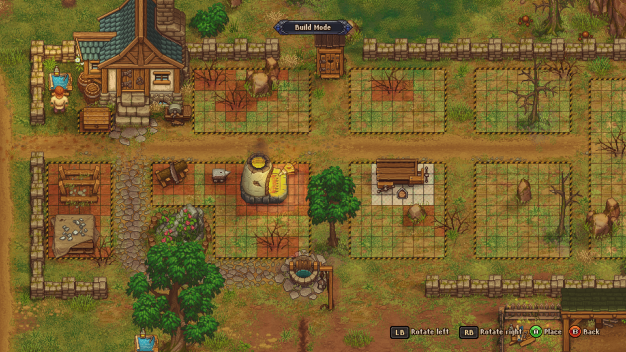 There’s always something that needs to be done.

To hamper things ever more I have no idea really what order I’m supposed to be completing these tasks in. I have a list of different characters wanting different things but there isn’t anything telling me the best way round to complete these tasks. In addition you can’t just go back and talk to every character when you feel like it. You get a clock in the top corner of the screen and each day is marked with a symbol. Certain characters are only in certain places on your map on specific days. With this in mind, to complete a task you may have to wait a while until the right quest giver appears at the right time.

Time in general is an important factor in the game. You have a certain amount of energy each day with which to perform your tasks. You can grant yourself more energy with potions or by eating but the only way to get a full re-fill is to sleep. Sleeping saves your game and also moves time on. This means that if you have to get things done before a NPC vanishes for a week you’re limited to how long you have before you have to sleep and potentially lose your chance to see them. 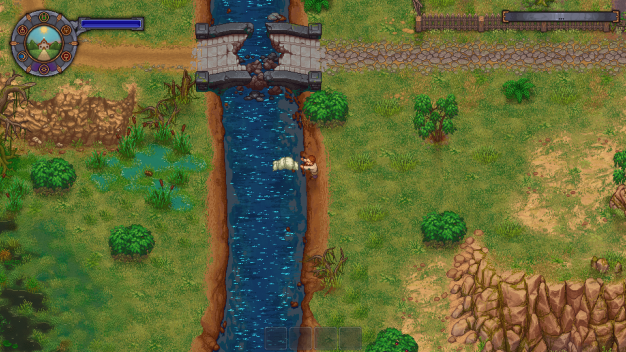 If in doubt DON’T dump it in the river.

When you aren’t completing objectives you need to be making sure you have happy corpses. Each grave has a meter that represents the sins of the person buried in it. If this meter is low it means the spirit is restless. Each time you improve their grave and their surroundings they become happier. Happy spirits mean a nice graveyard and less of a headache for you so it’s worth planting flower beds and keeping the gravestones and fences looking smart and in tip-top condition. As you learn how best to prepare the bodies you will find that this all helps for happy ghosts.

This all sounds really confusing doesn’t it? Well it is. The thing is, it’s not the kind of confusion that makes you want to put the game down and give up. This is that fun sort of frustration that makes you keep coming back for more even though you aren’t entirely sure whether or not you’re actually getting anywhere. This is the kind of game that you’re going to be playing over a long period of time. You’d literally need a walkthrough to sit down and complete Graveyard Keeper on your first run and in a short space of time. I’m pretty sure I’m not very far into this title at all and I’ve already put a good few hours into it. The plus is I’m going to keep going back until I figure everything out. The down side, of course, is I can’t tell you a great deal more about the game at the moment and I don’t like making you lot wait. I’m sure you want to be reading this review this side of Christmas. From a gameplay perspective I’ll just say go for it, it’s loads of fun but if you don’t have a lot of patience you’re going to struggle. 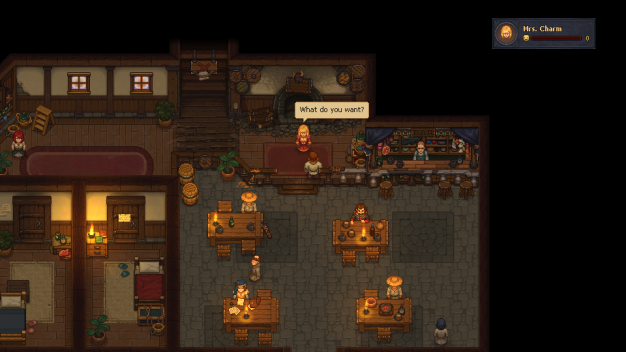 The interface is something worth mentioning here. This game is actually a joy to control once you’ve figured out how to play. This is something that I have to applaud. An already difficult game could have been made torturous with bad controls. Movement is simply WASD and everything else is done with one or two other key combinations. This is definitely welcome.

Graphically we’re opting for an old-school play on things. I seem to be saying this an awful lot at the moment but retro is the in-thing so I’m not really complaining. We seem to be moving out of the obviously 8-bit into the 16-bit era now. The game is colourful and looks nice in the sort of way every RPG of the mid 90s looked nice. Think FF7 or Shining Force and you’ll get an idea what I’m on about. With respect to sound the background music is good in a sort of, you don’t really notice it, kind of way. It’s not grating or abrasive so it isn’t a problem. Don’t expect wonderful voice overs, there aren’t any. Do you guys remember the teacher from Snoopy? Every character sounds a bit like that with the dialogue running across the bottom of the screen. See what I mean about mid-90s? This is an artistic choice so no big deal there. 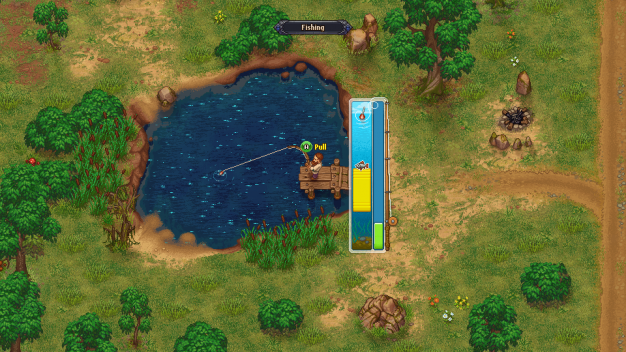 If you like games where you have to build a lot and/or a good RPG I think Graveyard Keeper is probably a good call for you. If you want something that isn’t complicated or doesn’t take a great deal of brain power to play, this won’t be the game for you. From my own perspective … I’m not Minecraft mad but I love a really good puzzle and I’m a fan of stories that don’t just give you everything on a plate. The simple fact that I know I’m going to carry on playing makes this game a success for me. This is actually the yardstick I use a lot when I’m talking about games but I think it’s a fair point. Take flashy graphics and clever mechanics out of the equation completely. If you want to come back to a game over and over it’s, good pure and simple. Ultimately, my opinion only goes so far. For the rest of you this is going to be a matter of taste.

Worth the hard work

I wish I could tell you so much more about Graveyard Keeper than I have, but the nature of the game makes that really difficult. If you love a good puzzler, this could well be a great choice for your library; just make sure you give yourself a good amount of time to play. This isn’t going to be a quick experience. If you want a game that will hand hold or give you all the clues you need from the get-go, skip this one and look elsewhere. All in all, it’s a great game but it will definitely come down to the personality of the player in respect to the amount of enjoyment they get out of it.