Ahh yes, the refreshing yet frustrating game of Root Beer Tapper. Originally released by Bally/Midway in 1983 as simply Tapper, this arcade classic put you in the role of a mustachioed, soda-slingin’ bartender who must tend to four – count ’em, four – bar-tops as wave after wave of thirsty and aggressive patrons attempt to bum-rush you. The following year, the game was re-released as it is known today as Root Beer Tapper, making it more kid friendly by removing the large Budweiser advertisement from the back wall of the bar. 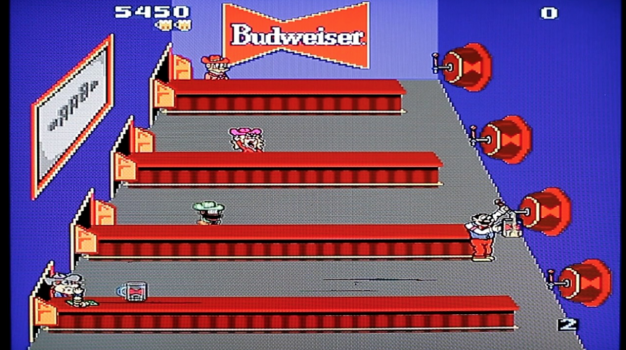 If you ever dealt with this game, you remember it starts off easy enough, with just a few, slow-moving bar-crawlers. You move up and down between the 4 different bar tops, filling large mugs of root beer and sliding them down the counter as customers enter. You’ll occasionally run down the bars to pick up tips or to grab empty mugs sliding your way, since a mug that’s allowed to slide off the end of the bar and break will cost you a life. Patrons that are not dealt with instantly will slowly make their way down the bar, and if they’re able to get all the way to the end without getting their root beer fix, they’ll grab you by that fancy mustache of yours and slide you right down the bar and out the door. 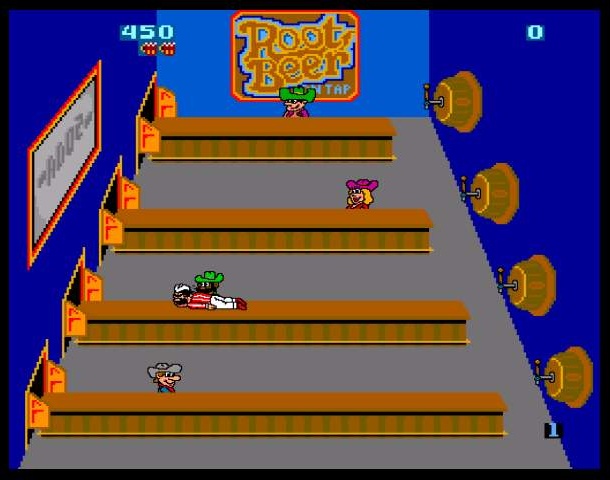 The game quickly becomes a true chaotic circus act as you try and keep tabs (pun intended) on which patrons are closest to the end of the bar and if any empty mugs are sliding your way. Between juggling mugs, tips, and patrons, you also have to watch out for the high-kicking dancing girls who will appear randomly to distract your guests, which stops them from grabbing any mugs you slide their way.  There are four different themed bars that you’ll tend to as you make your way through Root Beer Tapper, and there’s a little shell game-style minigame in between bars to break up the action. 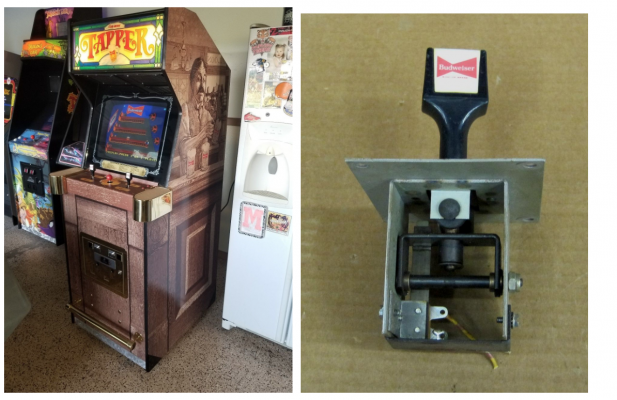 One of the absolute coolest parts about Root Beer Tapper was the arcade cabinet itself. The cabinet was set to resemble a bar. Complete with  a brass rail that runs along the bottom and two brass drink holders one on each side of the control panel. Depending on which version you were playing, the cabinet designed differed. The beer version featured the Budweiser logo and pour spout joysticks had Budweiser handles to resemble the actual pour spouts in real bars. Introduced the year after release, as you can guess, was the root beer version of this cabinet. This style was a generic root beer design plastered around the outside and featured root beer pour spout joysticks.

Check out my point system review below for a final summary of Root Beer Tapper!

Playing a game like this is time well spent, for a short amount of time. Could it be better? Absolutely. Maybe it lacks ambition after a certain point, is too repetitive, and has a few technical bumps in the road. Overall, for a 1983 arcade game, I came away happy playing this in 2018.