Assassin’s Creed Odyssey is carrying a bit of a burden. The tenth entry in the core Assassin’s Creed franchise has come hot on the heels of Origins, a re-imagined return to form for Ubisoft’s violent historical bonanza. Moreover, doubling down on the RPG side whilst stripping away even the most recognizable Assassin’s Creed mainstays – the hidden blade, for example – is a huge risk. Odyssey is entering uncharted waters in more ways than one. So does this sprawling homage to Grecian history tick the right boxes? 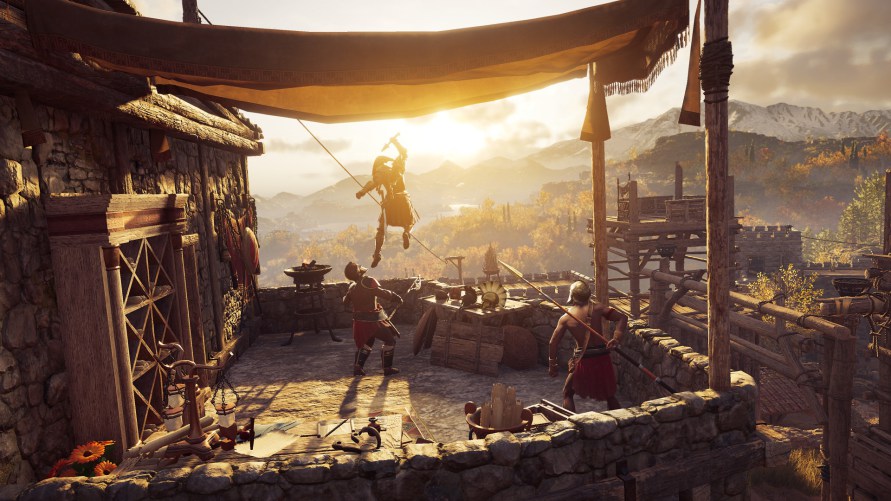 If you traipsed across the deserts of Origins, you will already be familiar with much of what Assassin’s Creed Odyssey has to offer. Combat is unchanged: the satisfying ebb and flow of a more tactical approach to fighting enemies is now complemented by ludicrous special moves that will have you Spartan kicking opponents into next week. A slightly frustrating targeting mechanic only slightly dampens the engrossing and often challenging fights with enemies who have all the skills that you do. 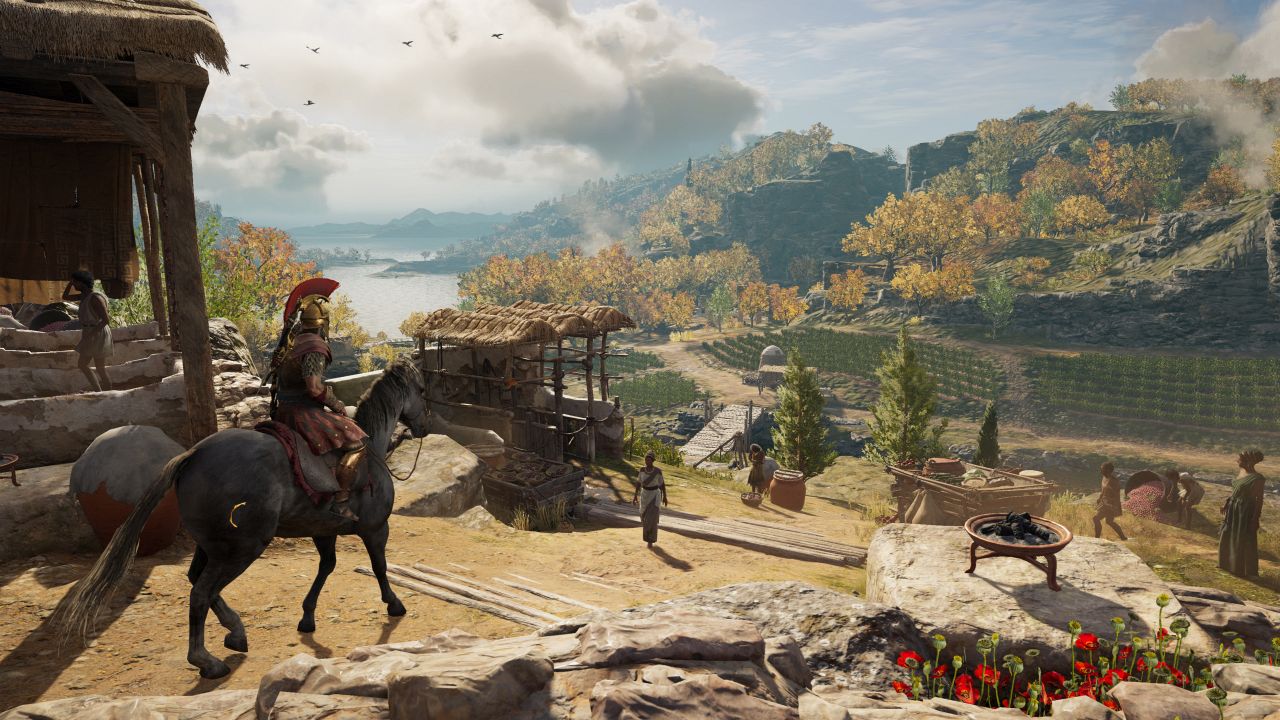 Odyssey‘s skill trees, however, are far better utilized than those of its predecessor. Your Warrior abilities – the combat mentioned above – are joined by Hunter and Assassin abilities that offer the foundations necessary for some genuine variety in character build. Weapons and armor now offer small stat bonuses, too, and you can re-distribute skill points at any time (for a small fee). It’s a little rudimentary for an RPG, but the choice is nonetheless more pleasingly varied than it has ever been. 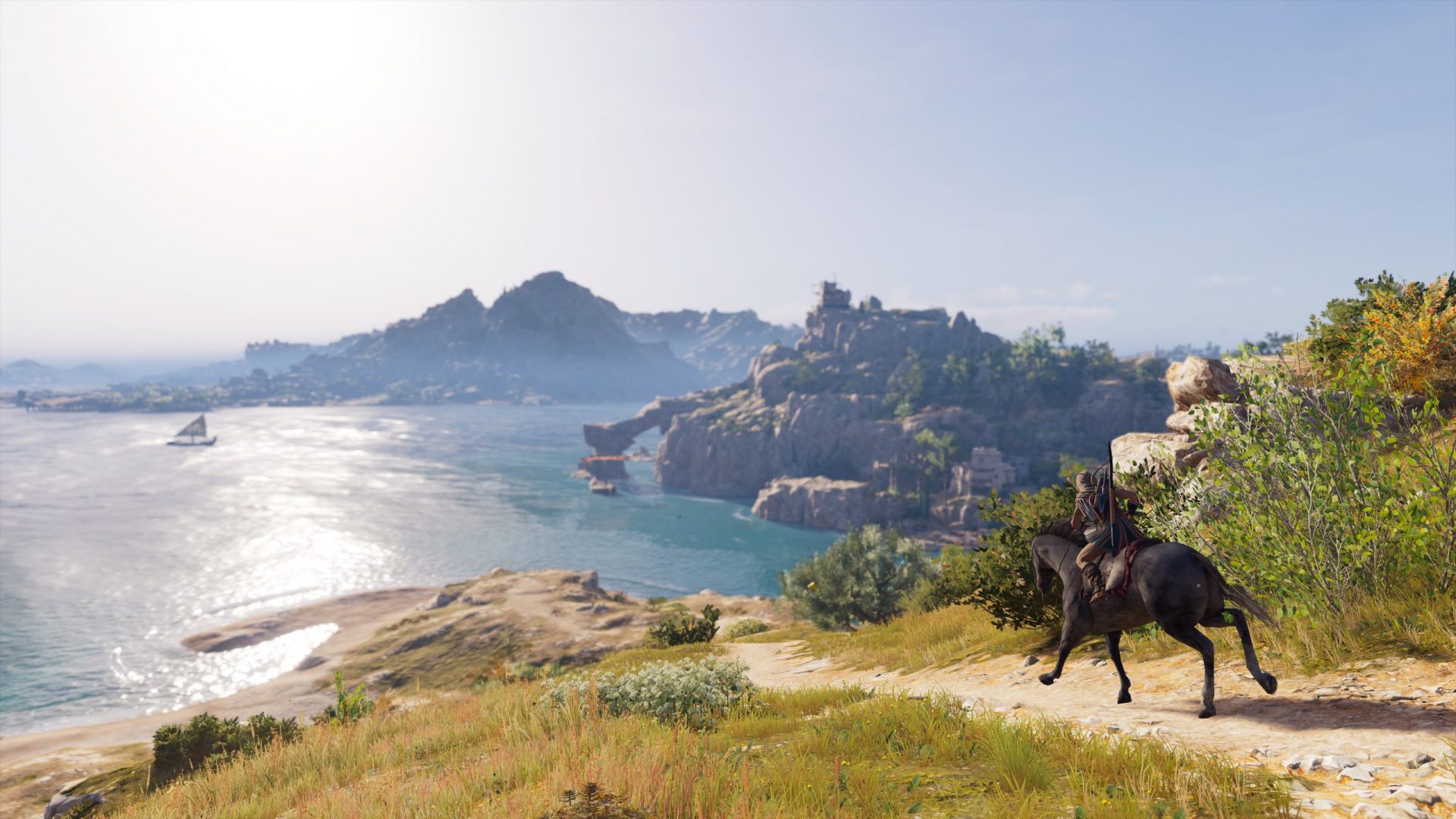 And yes, believe it or not, Assassin’s Creed Odyssey is an RPG. Choices are everywhere: from the gender of your character to the leader of the city of Athens, the decisions you make have very physical consequences. If you are caught stealing or killing, a Mercenary will make your life miserable; fight for the Spartans, and don’t expect any love from Athenian soldiers. You influence the world around you as much or as little as you choose. 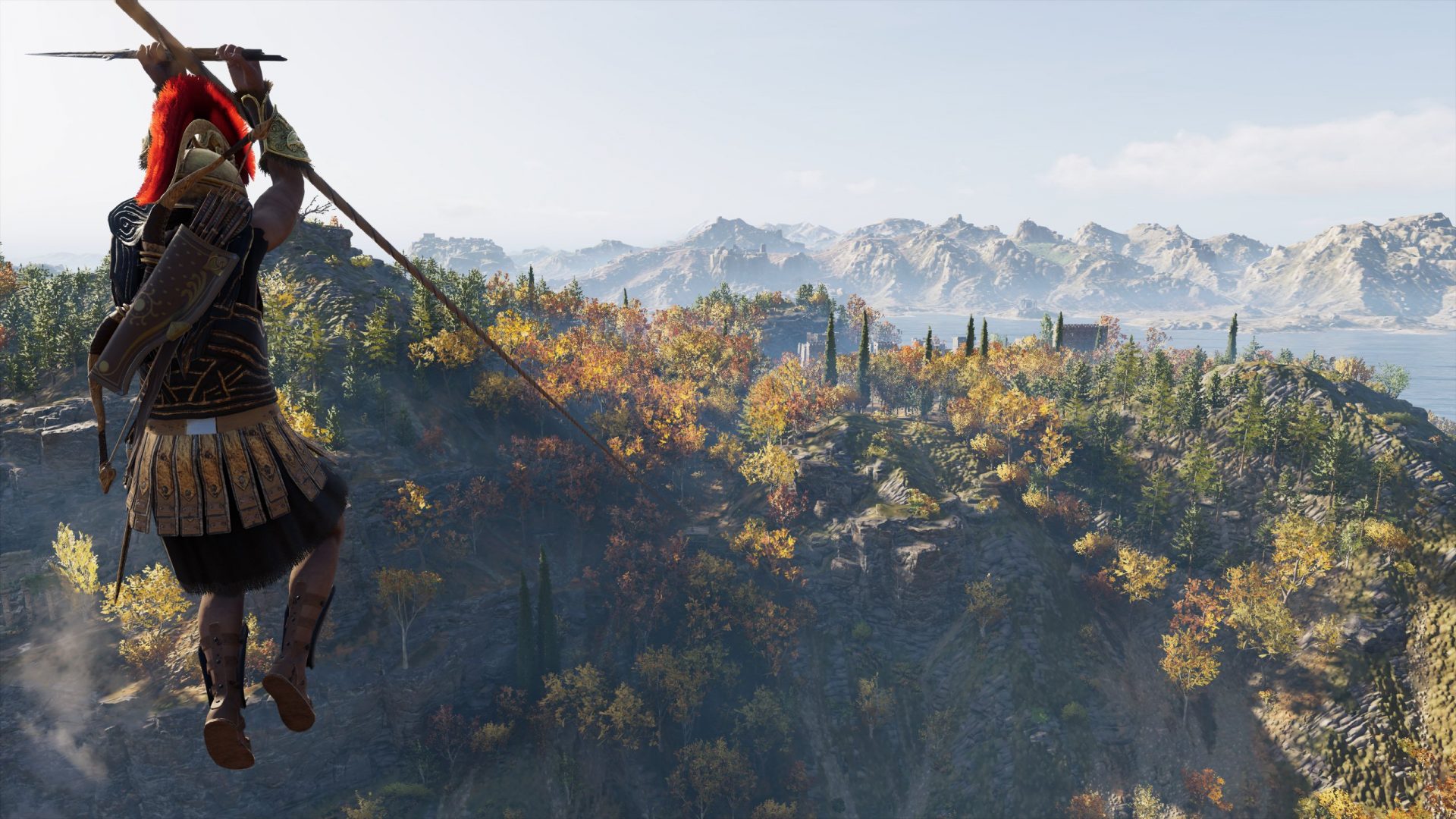 At one point, I was shocked to have an Oracle shame me for a less-than-pleasant decision I’d made earlier in the game. The knowledge that your actions have consequences can be considered a resounding success for Odyssey, though I sense that this was a bit of a cautious effort. The influential dialogue options – flirting being the obvious example – seemed like an afterthought, when they ought to have taken center stage. 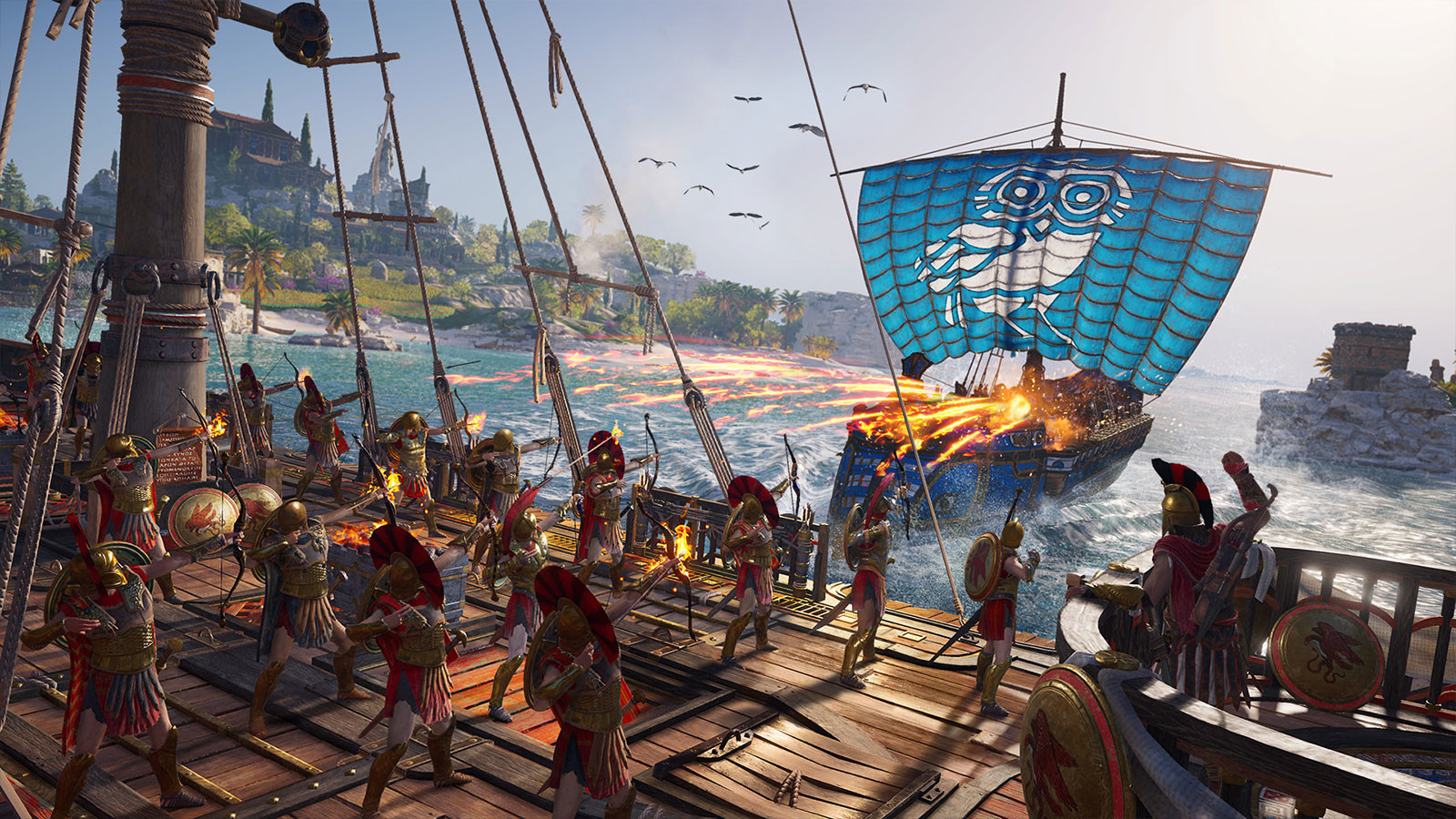 Our protagonists certainly do no harm in helping engross the player in their story. I chose Kassandra, and was not disappointed: a highly authentic performance from voice actress Melissanthi Mahmut rounds off a proud, wryly funny Spartan warrior with a heart of gold. In fact, the gruff exterior and mercenary lifestyle reminded me of a certain white-haired monster slayer, though I’m sure any resemblance was unintentional. 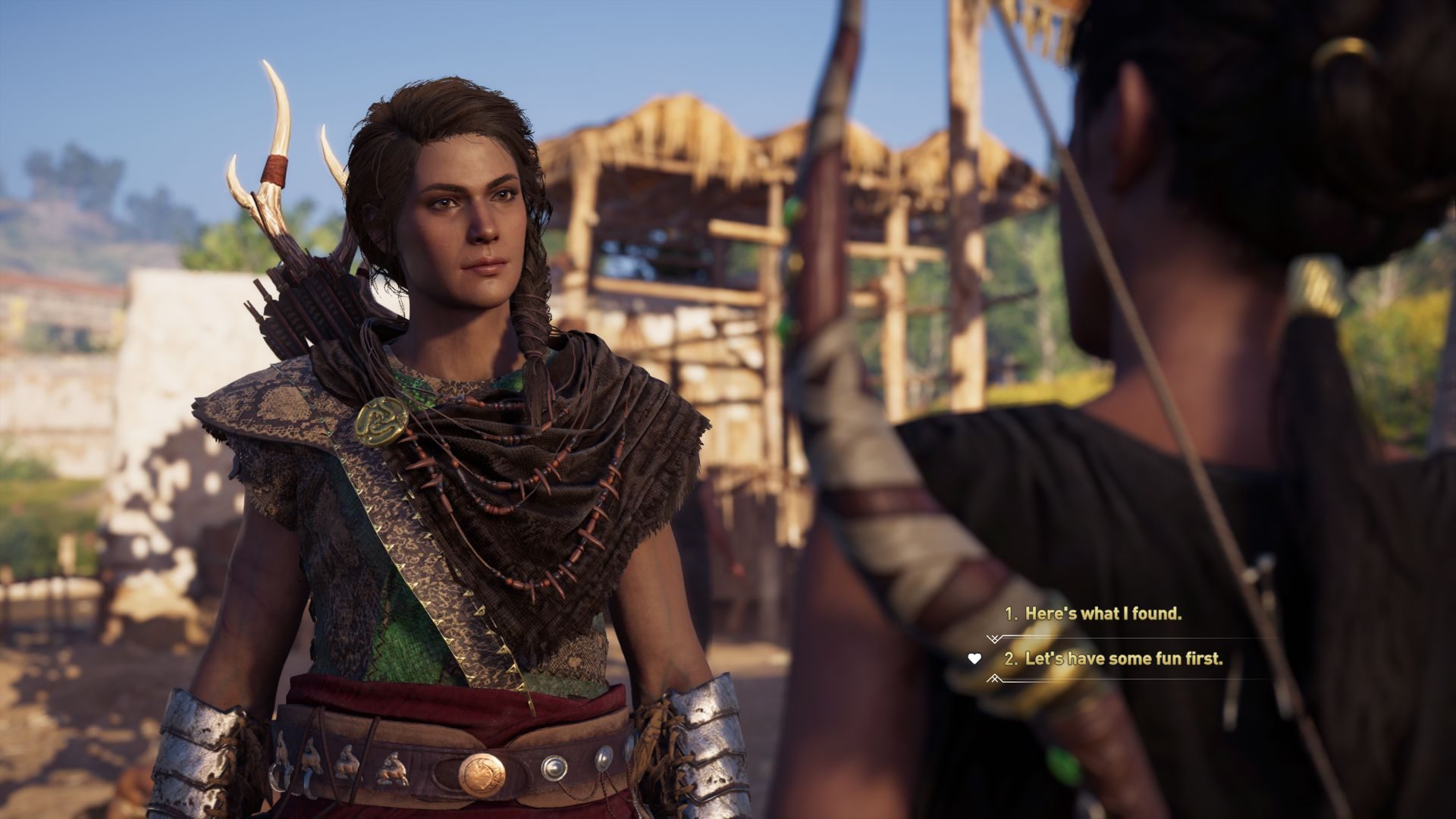 Assassin’s Creed Odyssey manages to complete its RPG home run with a well-written plot that stands out as a high point for the series. Convincing side-characters – many of them historical figures – litter the meandering story; the presence of Assassin’s Creed‘s unusual Ancient Civilisation is finally rationalised within the context of such a myth-drenched period of history. The franchise has always taken pride in its representation of the real world, but a flimsy narrative has too often let the bustling environment down. Not this time. 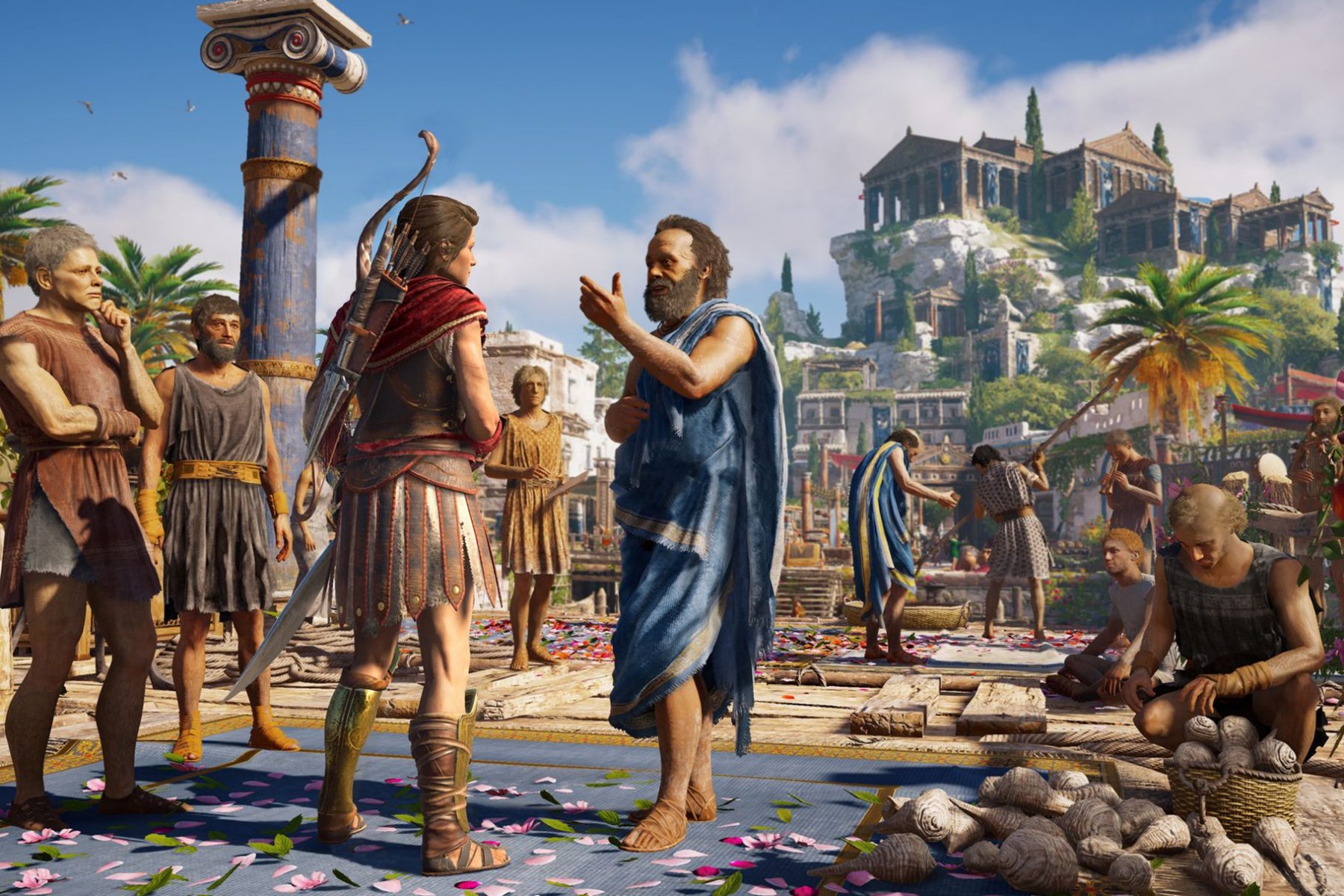 Even the side quests are unusually entertaining, masking their goals – go there, kill/steal this, get paid – with touching stories that breathe further life into an already lively world. In fact if anything, these optional objectives are so numerous that it’s easy to feel overwhelmed by your own to-do list. I’ve yet to engage with the huge Conquest Battles, and am struggling to complete Bounties, Contracts, and Limited Time events as fast as they are thrown my way. 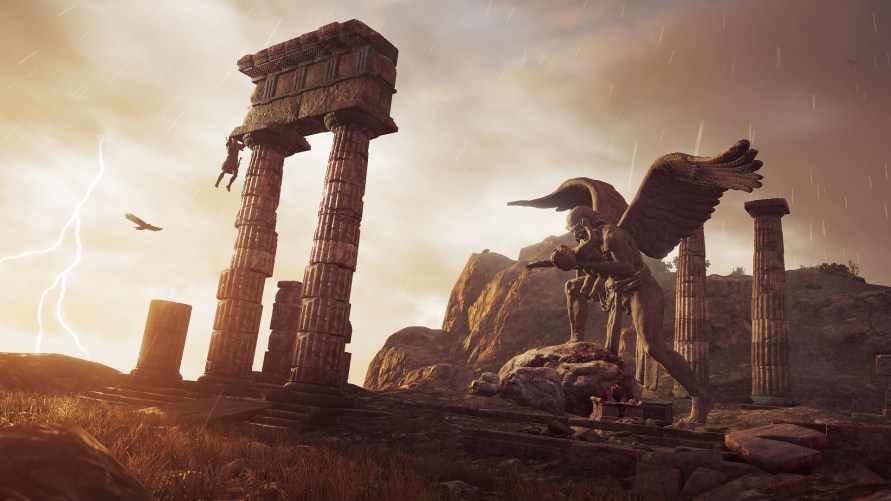 Obviously, Odyssey is a gorgeous game. Though it seems somehow less populous than Origins, the world is infinitely more enjoyable to explore; I found myself drawn to the series’ famous viewpoints, impatient to take in the view of the entire Aegean Sea as it unfurls toward the horizon. The return of ships could not have been better timed, more appropriately suited to this environment. Sun-bleached Greek islands dazzle with blinding white beaches that slide into azure water; to be honest, it’s hard to progress in a game with so many photo opportunities. 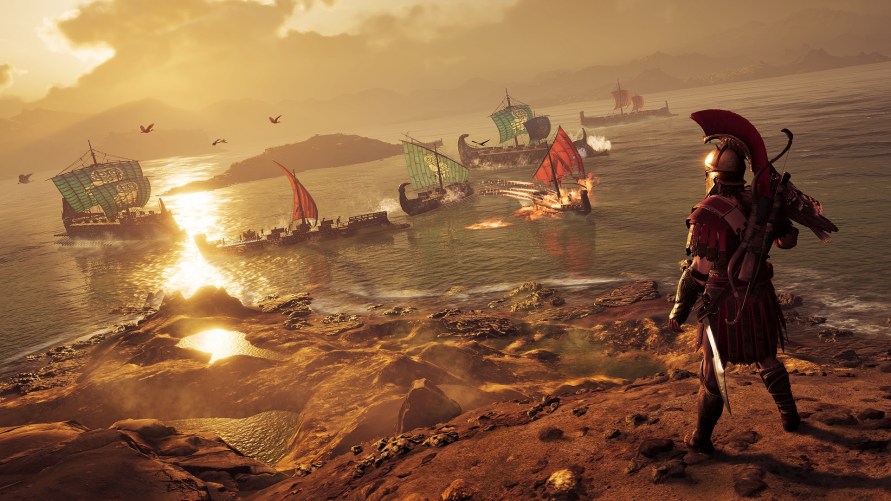 The scope of Assassin’s Creed Odyssey cannot be understated. This is the largest, most diverse world yet, a thrillingly detailed recreation of Ancient Greece that will consume all of your free time and then some. It’s a little rough around the edges in places, but it comes across as an earnest effort to offer more than any Assassin’s Creed has offered before. This is very nearly a true RPG, and the itch to explore has never been more insatiable.

This could be Sparta (if you so choose)

Assassin’s Creed Odyssey is brimming with the attention to detail and dashing good looks you expect from an Assassin’s Creed game. What you might not be expecting, however, is a well-crafted RPG that offers an immediately likeable protagonist and a story that seems to care how you react to it.