Katamari Damacy was originally released on the Playstation 2 all the way back in 2004. It never came to PAL region, so I wasn’t ever lucky enough to play it back during its original lifespan. It was the first game in the Katamari series, which only ever hung out on Playstation platforms (and once or twice on mobile) until the remaster, Katamari Damacy Reroll was released for Nintendo Switch and PC back in early December of 2018. Katamari Damcy Reroll is, without any shadow of a doubt, one of the weirdest and most fun games I have ever played. With that out of the way…let’s roll.

The story is simple: your father, The King of All Cosmos, gets drunk one night and spins wildly around the solar system, knocking stars, constellations, and finally the moon out of the sky. Your not-so-loving father demands that you, the Prince (the little green guy), fix it up. You are instructed to use the katamari (literally ‘clump spirit’) provided to you, which is basically a weirdly-shaped ball, to roll up items around earth to send into the sky in a big, terrifying ball to recreate the destroyed elements of space.

Your katamari grows and grows in size, and so too do the items you can pick up as you grow large enough to bring them into the fold. You start off picking up erasers and thumbtacks and things eventually get so ridiculous that you’re rolling up entire volcanoes and clouds. Wikipedia calls Katamari Damacy an action puzzle game, and I honestly can’t top that because I have zero idea about what you’d call this game otherwise. It’s almost certainly made its own little genre. 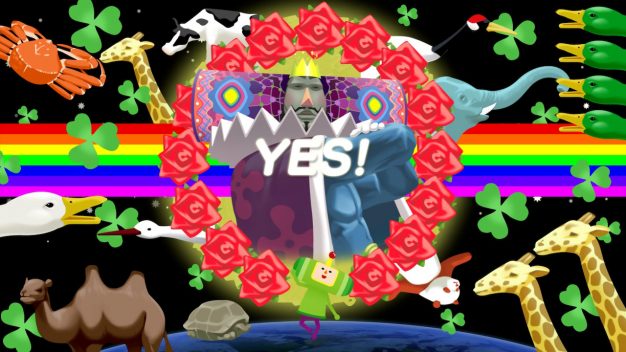 In Katamari Damacy Reroll, there are nine main levels which are named “Make a Star 1, 2, 3…” and so on. There are also several challenge levels for making constellations, such as “Make Virgo”, which requires you to pick up as many maidens (i.e. statues of girls, dolls, actual girls and women etc.) as you can in your katamari before time runs out and “Make Taurus”, which requires you to dodge around small cow and bull-like things while growing your katamari so that you can grab the largest cow possible to make an impressive new Taurus. Finally, you create the moon, which is by far the most ridiculous level of them all and is on such a grand scale that it needs to be seen to be believed. I’ve actually introduced about three or four different friends to Katamari Damacy Reroll by showing them the ridiculous scale of the moon level.

After you’ve finished a level, you can always go back to it, whether to beat your high score, actually pass the level requirements, or just for fun.  If you don’t improve from your previous try, you can just turn the katamari you made into stardust, which won’t overwrite your previous star. At the end of each level, after the timer has run out, you will meet with your father in space and he will assess how long it took for you to make the katamari, what categories of items that you picked up were the most plentiful, and how large the katamari became. 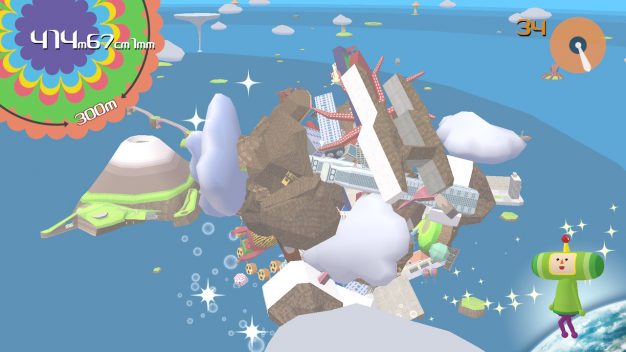 Almost all levels have a time limit, which gets larger and larger as the demands of the level increase. ‘Make a Star’ levels usually just have a size requirement, which you can keep track of in the top left corner of the screen. Constellation levels may have no size requirement, but instead a tracker of how many of the required item (e.g. girls, twins, swans, crabs) you have in the ball. Typically there’s no indicator of how many will appease your father, just that you should get as many as possible.

The King of All Cosmos is, well, a snarky bastard. He’ll give you an almost scary tongue-lashing if you fail to meet the level requirements. He’ll also pop into the level to make comments from time to time, usually at your expense but sometimes just to be weird. For example, if you pick up bunches of bananas in a row, he’ll start spelling out “BA”, “NA”, “NA”. If you only just scrape under the level requirement, he’ll sometimes take pity on you, but still call you out. If you do an insanely good job, he’ll actually praise you – and that’s almost as disconcerting after a long time of being slagged off constantly no matter what you do. 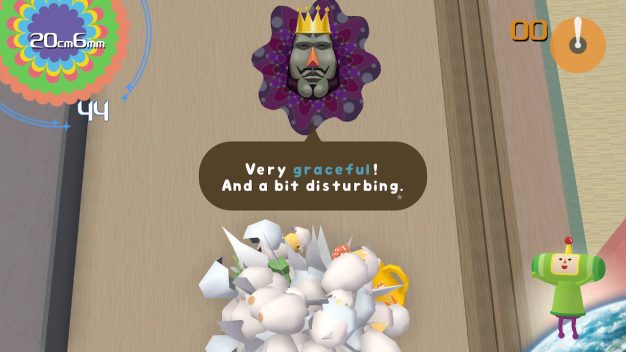 Some of the levels and challenges are pretty hard and it’ll take quite a few tries to do enough to get praise from the King or simply get a better than average result. The Taurus level and another constellation level like it are brutal when trying to play as a handheld, as you simply can’t see when you’re about to roll over a really tiny cow statue or something like that. It’s even hard on the big screen, but I definitely recommend saving those levels for when you have more visual real estate to stare at.

In every level there is a ‘Royal Present’ which you can collect, which the King gives very, very vague hints about before he sends you into the level. These are represented by little present boxes which you can roll into the katamari. If you keep them in there until the end of the level, you will receive a wearable item for the Prince which carries over to the menu screens, level HUD, and in the “see you next time” screen when you quit the game. There are plenty to choose from, though the cute little scarf is my favorite. 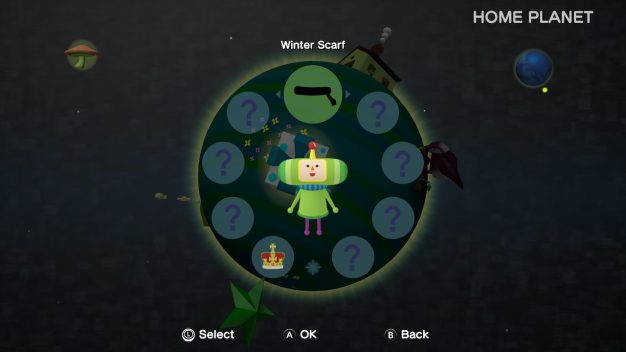 The actual gameplay is very simple and the game provides a quick little tutorial into how to push the katamari around right at the start. You almost always use both analog sticks together to make any kind of movement. You can jump up high above the katamari to see what’s around you, or have a look around. You can also make mad dashes, quickly change sides, and rotate yourself around the katamari to change position. A few of the movements take a little getting used to, but once you’re into it, it’s very easy.

Sometimes when the katamari is very large or stuck, it can be hard to right yourself, though the game is usually pretty helpful in that regard. Often if you spend time stuck in one place, you’ll start hemorrhaging items until you’re small enough to get free. This can be annoying, but it’s better than being stuck completely. I played the game most often with a proper controller (not the “controller” with the joycons inserted). When the Switch is docked, I just find it much easier to play that way, though others may not have the same issue. This isn’t specific to Katamari either, I just prefer it for Switch games on the whole when playing docked. 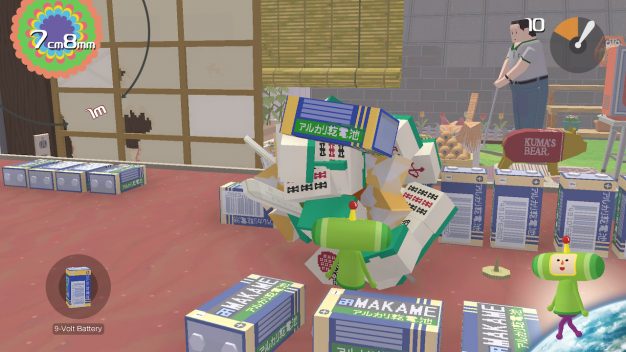 Apart from being crisped up and brightened since its original release, not much has changed in a graphical sense since the PS2 version of Katamari Damacy. The environments are pleasantly and uniquely blocky, bright, and colorful, the noises of the creatures and people you pick up are bizarre and hilarious. The music – which I discovered well before I knew much at all about the game – has been left unchanged, which is a definite blessing.

The music of Katamari Damacy is an absolute delight. Many of the songs are unbelievably catchy and, like the rest of the game, uniquely and perfectly fitting for the rest of the insanity. I daresay the only audiovisual issues I had with the game in its entirety were the 30 second long siren at the end of each timed level that warns you about the time running out. Sssssh, maybe siren a little less, please. 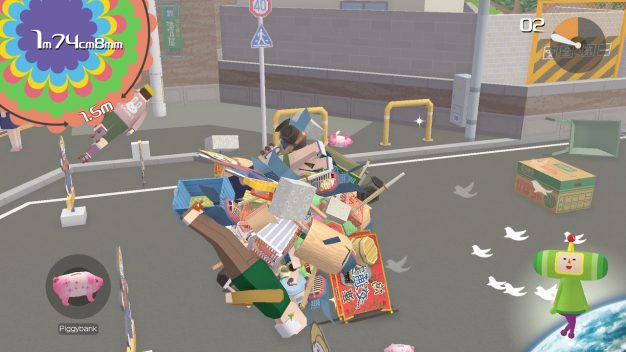 The final thing to expect from Katamari Damacy Reroll is that, on top of being really weird, it’s also just really funny. It’s absolutely absurd, but the weirdness of the King and the way he speaks to you in such a flippant and rude manner while being so flamboyant is truly hilarious. The little jokes hidden in the levels and the way people scream and run away when you approach are so chuckle-worthy it makes me smile every time (that sounds a lot more sinister than intended, I assure you).  If you’re looking for a fun and funny game, look no further.

In addition to the standard gameplay there are things like a music box for listening to all of the songs, a collection where you can check in on your high scores and collected items, and a multiplayer section which I haven’t had the chance to experiment with because none of my friends have mad rolling skills like I do, so it simply wouldn’t be fair to challenge them. 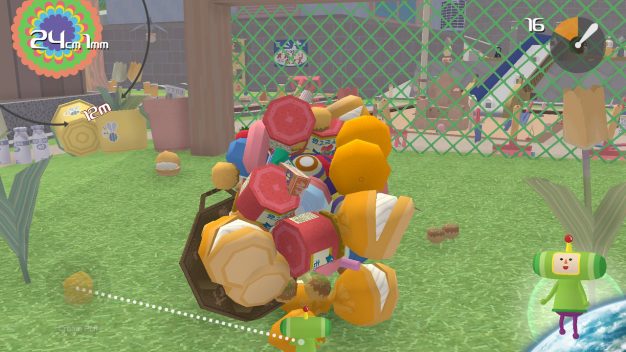 Katamari Damacy is around $30AUD on the Switch store. I hear in some areas there was a physical release, but in Australia (or at least where I live) we had no such option. I imagine the price for the physical edition isn’t much different. Buy Katamari Damacy Reroll and prepare yourself for hours of addictive rolling of cats and buildings into a ball to make the moon. Need I say more? 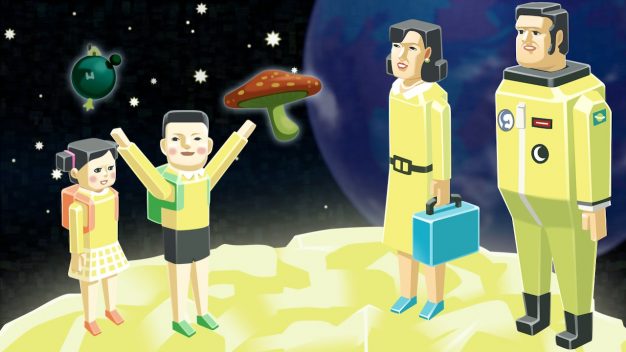 Katamari Damacy Reroll is available on Nintendo Switch and Steam for PC now!

For Whom the Ball Rolls

This is the single weirdest game I’ve ever played and I simply can’t stop going back to it over and over again. Consider me thoroughly rolled up in Katamari Damacy Reroll. If you play this and somehow don’t get the main theme stuck in your head, you’re made of stone.