Rift Keeper is a roguelike platformer about a chain clad adventurer who’s been summoned to a sleepy town—well more of a cul-de-sac really. Once you’ve arrived on your trusty horse and cart you have to heal the strange rifts that have appeared. This arcade dungeon dash pits you against a host of weird creatures as you battle your way through procedurally generated levels.

As the title suggests you play a Rift Keeper, a kind of knight-protector of the realm. However, you’re not wearing armor or brandishing a sword, at least not at the beginning; instead, you’re wearing chains, leather cuffs, a mask, and red hair. You’re the Obi-Wan Kenobi of fetish fashion, which doesn’t bode well for the rest of the game.

The sleepy town consists of some shops, one church and not much else. At this point, it becomes clear that the extent of this game’s technical prowess is three shop keepers with heads the size of melons and another Rift Keeper who does nothing except spout benign comments when you pass. “When I was your age…blah blah blah.” As if your ostentatious outfit wasn’t enough, when you enter the dungeons you’re confronted with all manner of anatomically incorrect creatures. These mindless sprites don’t follow or interact with you unless you approach them and many can be easily killed by striking them with your chains. Yes, not only do you wear them, but you also use them for combat.

There are 30 dungeons to explore in total and you have to complete 10 before you reach a boss battle. Each level gets harder as you progress and If you die in any dungeon beforehand, you have to start again. As with most roguelikes, you collect coins which are used to upgrade your weapons and skills. This is done by visiting the three bloaty-headed vendors in town.

As you traverse your way through the labyrinthine levels you realize that you can’t use any aerial attacks which apparently weren’t mapped to the controllers when the videogame was designed. This really does limit your moves and your ability to perform complex attacks. You have to stand on the same level as each enemy before engaging with them. 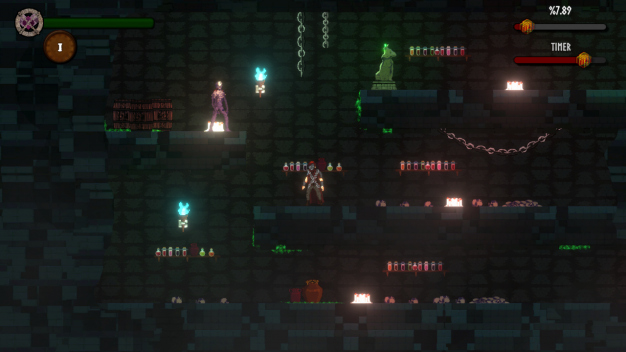 The collision detection on most of the enemies is very lackluster as they generally pace up and down like they’re on conveyor belts, apart from a few flying ones who engage but can’t easily be killed from where you’re standing. Some of the enemy sprites unintentionally hover off the surface as they walk and the levels feel generic and not very cohesive in design.

Rift Keeper is inspired by the original Castlevania and Metroid games. It has none of the effects we come to expect from more modern roguelikes such as Dead Cells. There’s no parallax scrolling and limited lighting effects which does give it a much more retro look which might have been Frymore’s intention. However, its crude graphical style still feels like it was a development issue rather than an aesthetic choice. 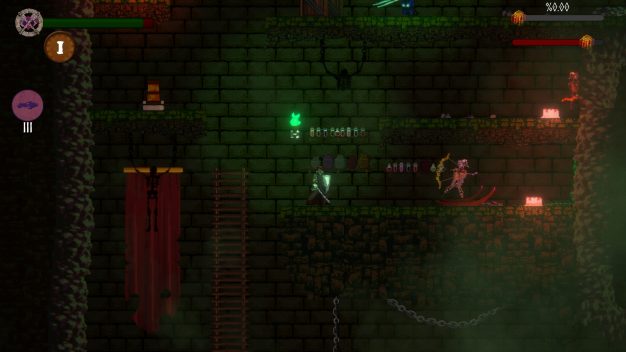 In the same vein, there’s no chunky 16, 32 or 64-bit graphics either. Its style feels more contemporary but ultimately worse for it. Rift Keeper has tried to emulate games with a much stronger identity and has created something that feels lacking in comparison. Its soundtrack is a heavy techno beat that thumps its way into your brain like your at an 80’s rave and the sound effects also feel reminiscent of this era. It would have been nice to interact with the chains that hang from the ceilings and the many doors that are part of the background but unfortunately, they’re just scenery.

The gameplay does become more challenging as you progress. Unfortunately, you never feel like you’re upgrading your skills or finding new objects that actually change the combat or flow. Instead, the lack of variety makes the game feel more of a labor than a joy. Game development is competitive and it’s good to encourage Indie developers to create new and interesting content, however, this game feels like it was too ambitious and perhaps needed more refinement to realize its true potential.

Rift Keeper doesn’t do anything different from other titles that have gone before it and it doesn’t add anything new to the Metroidvania subgenre. Frymore has created a videogame that is mediocre in design. Although there are elements of its gameplay that are good there’s not enough to set it apart from its contemporaries.

Not enough to set it apart from the rest

There’s the start of a good retro videogame here, but there are way too many design flaws in its present state.

About the author: Simon Norman

Simon Norman, AKA Oggie is an avid video gamer whose first computer was a ZX Spectrum, of which he holds a special nostalgic fondness due to its squishy rubber keys.