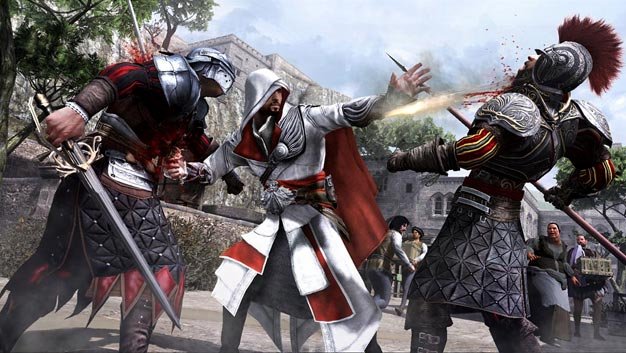 This year’s Assassin’s Creed Brotherhood is the first game in the series to have a multiplayer side to it; maybe you’ve seen it demonstrated. Like it or not, and even though post-launch DLC has become the norm, including at Ubisoft, Brotherhood may defy the unwritten rule.

Four-something months from release, the game’s technical director Mathieu Gagnon has not been made aware of any plans for post-release multiplayer add-ons. “There are absolutely no plans for DLC at this time,” he said in a recent interview. “By ‘no plans,’ I mean I have no clue of the plans. If we have plans, I’m really not aware.”

The multiplayer component itself, Gagnon also says, is about “conquering a new experience as far as the franchise is concerned”.

“I think the multiplayer becomes an integral part of the game. We still have the complete single-player to back it up … I don’t think it’s a tacked-on strategy to give more gameplay in order to justify the release of Brotherhood.”

“It’s really one experience: finishing up Ezio’s story. Another experience: training Abstergo recruits in the present to be able to fight the war between Desmond and Abstergo, because that war is also going on as well – at the same time we’re living Desmond’s life. So that’s exactly why we’re doing this. We’re offering a little insight inside that present day narrative, and I find it super interesting to push the multiplayer that way.”

Brotherhood will ship in mid-November, for PC, Xbox 360 and PlayStation 3.