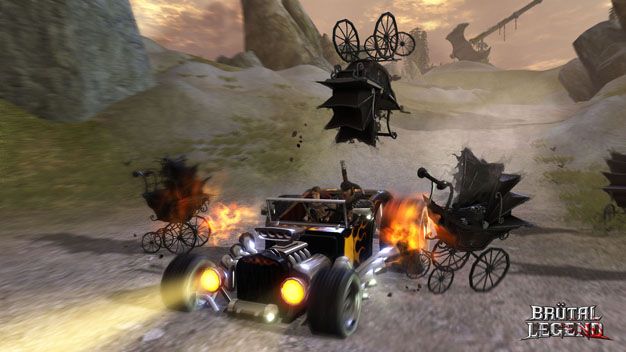 Time to play the blame game! According to some sources at Double Fine Productions, gaming guru Tim Schafer’s independent development studio, Activision Blizzard is intentionally making the transition of Brutal Legend to a new publisher difficult, if not downright impossible. The game was left without a publisher when Activision merged with Blizzard earlier this year.

Brutal Legend, a heavy metal hack n’ slash starring Jack Black and featuring the voice and music talents of some of metal’s masters – Motörhead’s Lemmy Kilmister voicing the Kill Master, Judas Priest’s Rob Halford voicing General Lionwhyte, and Black Sabbath producing original music – seems like a surefire success, poised to ride the wave of goodwill engendered by Psychonauts and the current popularity of music-centric titles like Guitar Hero and Rock Band. But so far, deals with EA, MTV and now Activision have not made it past sound check, citing that the title is a significant creative risk. Translation: significant FINANCIAL risk, because never once has a Schafer-helmed title – which includes such adventure gaming gems as Monkey Island, Day of the Tentacle, Full Throttle and the artistically-lauded but commercially-doomed Grim Fandango – wanted for critical or creative praise.

The interwebs are abuzz with conspiracy theories, ranging from Activision Blizzard sabotaging efforts to get the upperhand in negotions to the game being held back because it is too dangerously awesome for mainstream consumption (a theory I personally subscribe to) – but seriously, someone needs to step up and claim this thing, soon. The possibility of a Tim Schafer game never seeing the light of day is a crime against all gamerdom. How could anyone be so cruel as to stand between me and my lifelong dream of running over demon baby buggies in a fire-spewing, metal-blasting hot rod?