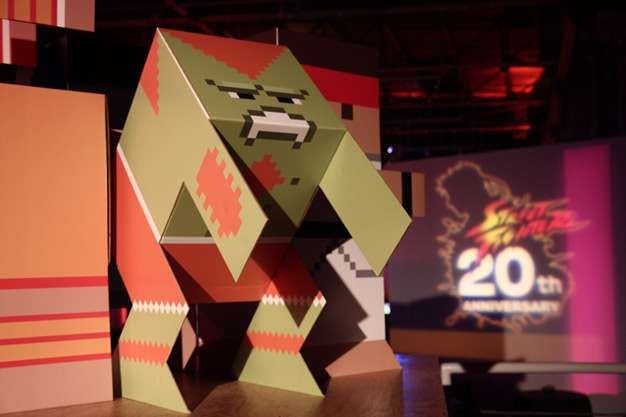 Thursday night Capcom took over the Geffen Contemporary at the Museum of Contemporary Art in downtown Los Angeles. They didn’t take it over like Hans Gruber and Co. did in Die Hard, but now that I think about it, that would’ve been kind of badass…even if I had to be the guy running around barefoot whilst shooting off one-liners.

Instead of holding people hostage, Capcom threw a party for not only the launch of Street Fighter IV but the 20th anniversary of the franchise as well. It was an event for the fans to come out, get some hands-on with the latest installment of the classic series before its February 17th release date for Xbox 360 and PlayStation 3 and absorb more history of the game than I think is humanly possible. Hit the jump for all the fun bits and eye candy.

Capcom went all out in delivering an experience to the people. As fans entered (lucky enough to make it through the insane line outside), they were greeted by giant-scale papercraft version of Street Fighter favs Ryu, Ken, Chun-Li, Blanka, E. Honda, Dhalsim and Guile (hung upside-down for his “flash kick” move) that really need to be hanging out in someone’s apartment. Demo stations were literally everywhere you turned loaded with Xbox 360s and PS3s running on sexy HDTVs; standard controllers and the fancy arcade sticks. If that was too mundane an experience, you could wander into a separate room to play the game running off a projector with beanbags scattered about for spectator comfort.

For the “old school” experience, networked arcade machines of SFIV lined a wall and cabinets for classic Street Fighter titles mingled amongst the crowd — sans “I got next” quarter lines. If you’d rather look than touch, a little gallery was on-site with cabinets painted on and carved by artists like Jim Mahfood of I AM 8-BIT and Rafael Santos of Guerrilla Union.

Away from the main area, glass cases displayed collectibles, promotional items (mini-Sonic Broom!) and even props from the upcoming film. Series producer, Yoshinoro Ono, when not roaming the floor taking pictures, was available to chat with about all things hadoken-related. There was even a screening of the anime included in the collector’s edition of SFIV, The Ties That Bind.

Musical guests DJ Tokyo Component, The Knux and DJ Qbert provided the audio entertainment while a mini-tournament, giveaways for copies of SFIV and plenty of free schwag rounded out the night. Seth Killian, Capcom’s community manager and inspiration for SFIV’s final boss, aptly-named, Seth, was also wandering about, meeting with fans, signing autographs and possibly kicking some ass. Not mine though because I’m afraid of that.

The event was truly something for the fan and Capcom delivered 100% on giving it to them. Unfortunately, due to an overwhelming turnout, not everyone that showed up made it into the venue. Although it sucks, it’s a real testament to the lifeline of and devotion to the Street Fighter franchise and that’s a reminder that legends never die.