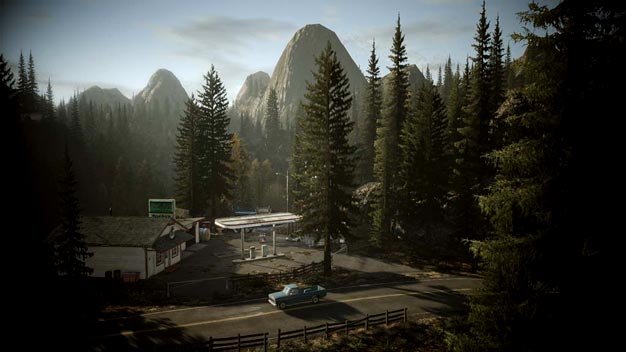 Ahh. You see that? That’s my home state of Oregon perfectly rendered. The trees, the mountains, the abandoned gas station, the beat down pickup truck probably driven by a meth addict. Oregon’s splendor has never been given the attention it deserves by the videogame realm, and that great injustice will be undone when Alan Wake launches in May, and to hype up the release, Microsoft has announced Bright Falls, a six part episodic film series that will serve as a prequel to the game.

The series is directed by Sundance award winner Phillip Van, stars Tom Noonan (as seen on Damages) and Cooper Huckabee (soon to be on True Blood), and was filmed on location here in the great State of Oregon. If you have Xbox Live Gold, the first two episodes will be available on April 25th. Silver members can download them April 26th, and if you’d rather watch them on the internet, they’ll be available on Brightfalls.com April 27th. A new episode will be released weekly from that point on, and the final two episodes will be released on May 17th, just one day before the game is released in North America (which includes Oregon). The press release promises the series to have a distinctly Twin Peaks feel to it, and if they wanted the series to have a somewhat abnormal and depressing feel to it, they picked the right place to film it.