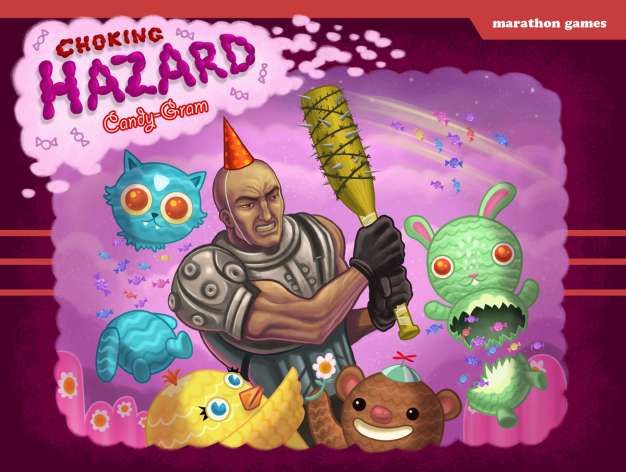 Well I guess this does it for the run down of “classic” Matt Hazard games. It’s ending on one hell of a disturbing note. Choking Hazard: Candygram sounds like the greatest B grade movie ever made but one of the worst videogames ever, which is probably why it signaled the theoretical end of Matt Hazard. It looks like Viva Piñata meets a guy with a baseball bat wrapped in barb wire. Ok, that’s exactly what it is, and for once I’m glad this game actually doesn’t exist. I’m not sure how Matt is helping those Piñatas out at all.

But do not fear, all of you who are already missing Mr. Hazard. If you want to keep the lie alive you can head over to Marathon Software publicist Ralph Tokey’s blog, where he is chronicling his experience with the early Matt Hazard games. We’re told we’ll be getting some actual news about an actual game any time now. It’s gonna have to be pretty awesome to live up to this marketing though. And I swear to everything holy if one of these games isn’t featured as bonus material in the actual game I will head over to D3’s offices and take a cue from Mr. Hazard in the above image.

The legendary Matt Hazard is back in a videogame that will be fun and exciting for families and gamers of all ages! In Choking Hazard: Candygram, players will jump into the lawman’s boots of Matt Hazard, as he tries to control a wild and wacky society populated entirely by mindless piñatas!

When thousands of candy-shooting piñatas emerge from a Purple-Warple-Hole near “Hazard’s Hillside Habitat,” a sanctuary for endangered species established by Matt Hazard as part of Earth Day celebrations, Hazard’s famous toughness is put to the test as he is tasked with rounding up all of the candy containers and returning them to their own dimension. Gamers will travel to the Hard Candy World and take on the role of Lawman as they maintain order in an increasingly anarchical society.

Matt Hazard is not only now safe for kids, but is also the only documented environmentally friendly videogame hero in the world, according to videogame historians and school districts nationwide.

It’s up to gamers worldwide to find out if Matt Hazard is as tough as hard candy in Choking Hazard: Candygram.

More than 35 different species of Piñatas to wrangle, each with unique powers and attacks!
Dozens of delicious weapons, including the Goober Gun, the Bubble Gummer, Sugar Stick Bats and many more!
Ground-breaking open-ended gameplay that means the game never really begins, or ends – thousands of hours of repetitive fun for kids!
Classic and now famous Matt Hazard attitude, wacky humor, over-the-top action and kid-friendly cartoon-like art style.
Special budget pricing to celebrate the success of the Matt Hazard franchise means gamers of all kinds can meet Matt Hazard and become new, lifelong fans!