Arcade Spirits is a text-based romance sim brought to us by Fiction Factory Games and published by PQube. Set in the year 20XX, it follows an alternate timeline where the 1983 video game crash never occurred. The game centers around Ari Cader, a lost little soul devoid of life’s purpose and spirit. Arcader, get it? 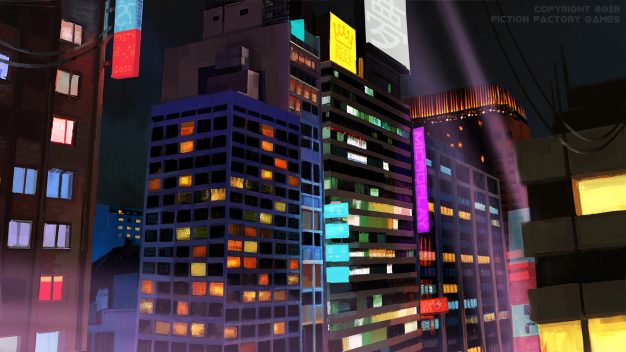 Ari is struggling to hold down a decent job. She moves to the city from the ‘burbs with her friend Juniper in hopes of them both living the dream and finding happiness. After a turbulent work history, you are granted employment at the Funplex, a popular arcade, home to a host of unique personalities and customers. After loosing yet another job, her optimistic and obnoxiously supportive roommate declares that Ari needs to seek new help toward finding her purpose, happiness, and dream job.

This help comes via the somewhat pushy phone app, IRIS. IRIS (Identity Identifier System, if you loose the R) analyses voice, tone, inflection, and word choice to help you to discover what you life is missing.  The app (eerily) accompanies you along your journey, listening to all conversations, reading every emotional tone and phrase, and provides you feedback along the way. Feedback is based upon your response selections, with each selection altering different responses, outcomes, and plot lines. The identity identifiers are appropriately, adequately, worded accordingly:

Excuse me while I go take a bath to wash off all of those adverbs. 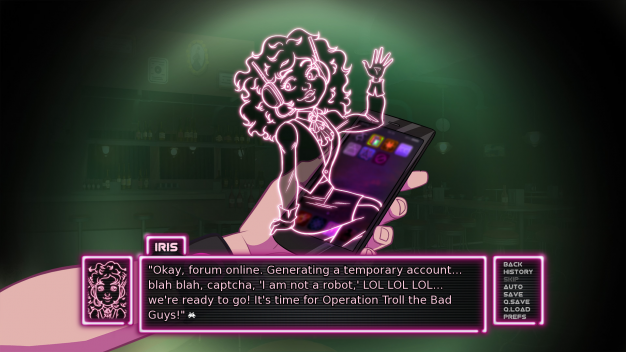 These identity indicators can be obvious (color and symbol coded) or hidden. I chose to see them. And, while I thought this might feel somewhat like cheating. There isn’t really any clear indicator that your choice is the “right” or “wrong” one until later in conversation, if at all. Along with these guidelines, IRIS will track vocal responses from those we speak to and provide you with relationship scores.  Your responses are stored toward your overall score and progression. Your score can then be referenced at different times.

Now, with all of the initial sequence focus on your goal being to find your dream job and inject infinite happiness to your spirit.  It was a little bit curious when the next scene involved IRIS locating your dream job at the local old-school arcade.  I suppose, the overall purpose of the game isn’t to find your dream job at all.  Perhaps it’s just how you keep your job and work with forming relationships? Or I may have missed the point here completely? 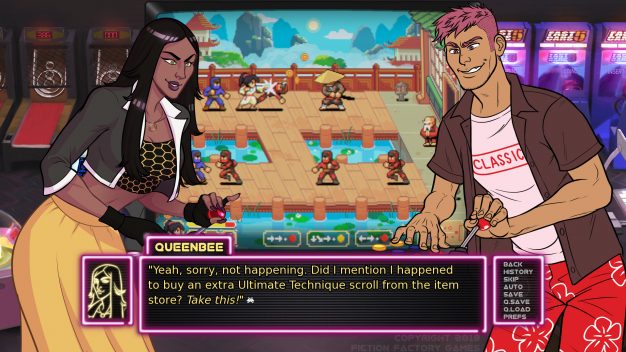 Something to mention is the character creation station.  This is a nice feature to see included in these character story line based games. Character development is a large factor in this game, so being able to have some control over your own from the start is a good asset for building that self inclusion in game.

For those of you who don’t know, these romance sims can be a bit…saucy. Like, pour on the gravy, kinda saucy. So, it was a nice touch to see that the level of love-ness could be altered.  You can have things simmered down or turned up to full boil, depending on what focus you choose. Your story can tackle love head-on, be open to it, or you can just focus on the task at hand. Either one you choose, having the option is a nice touch and gives back a little more control to play styles.

Arcade Spirits intertwines some nice gaming nostalgia. There’s subtle reference to E.T. the Extra-Terrestrial, the 1982 Atari adventure game that became a cult classic for being dubbed the ‘worst video game of all time.’  An arcade game that reeks visually of Pac-Man, an acknowledgement to Dragons Lair, and a rip of arcade dance simulator stations.

This nod in the general direction of 80’s and arcade style gaming bleeds into the overall visual and audio aspects too. The artwork is awash with neon overtones, and each character’s representation is visually lavish.  There is detail and variety in scenes, which means you’re not bored with the same visual overkill. The neon hints and detailed backgrounds, paired with character visuals, provide you with plenty of visual snacks.

The audio soundtrack was surprisingly impressive.  Synthesized nostalgic beats and overall sound effects are well done. And work together to create an accurate atmosphere. Each character audio is also voiced individually. While not all text is spoken, the sections that are work well enough to draw you in and bring back your focus to what you’re reading. 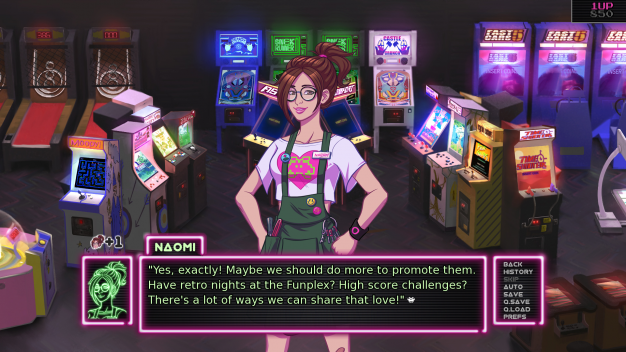 Yep, there is a lot to read. Honorable mention to my pointer finger and its now suffering RSI. There were definitely moments where the mindless clicking became a little bore-some.  Even more times I would get lost in the clicking and then be faced with a need to interact, but had missed half of the conversation.  So, ‘point-and-click’ is an understatement here.

You’re clicking with the occasional need to make progressive story line decisions.  With this you will come across some responses that are seemingly obvious, and others that are spontaneous and out there. Others can be overly dull, but the overall need to pay attention to the storyline is imperative to how your story will develop and unfold.

This should be seemingly obvious for a visual novel game, reading, I mean.  Yes, it can seem monotonous at times, but that’s what you get when playing a visual novel…words…reading.  However, all of the reading really does help to hash-out a strong in-depth plot and story line. It is also attributes to Arcade Spirits truly great character development. 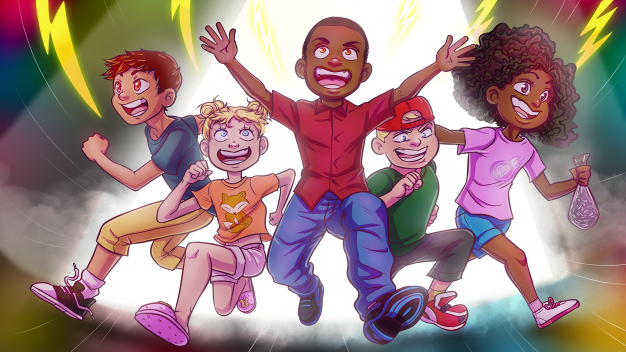 Each character in Arcade Spirits comes with their own back story. Some are more mysterious than others, some come off mean and aggressive from the get-go. As you interact and engage more with each of them you can begin to see into who they are and why they are.

The writing is vast, as I’ve mentioned, but I came to see how relevant much of the language is. This is a playable novel, so you need to feel emotional attachment. On even a basic level, to want to progress further and achieve some form of end result. The outcome can all be altered depending on how you play the game, and which characters you chose to interact with. But the in-game language is necessary to achieving this, and I think the game pulls the emotional facet off well. 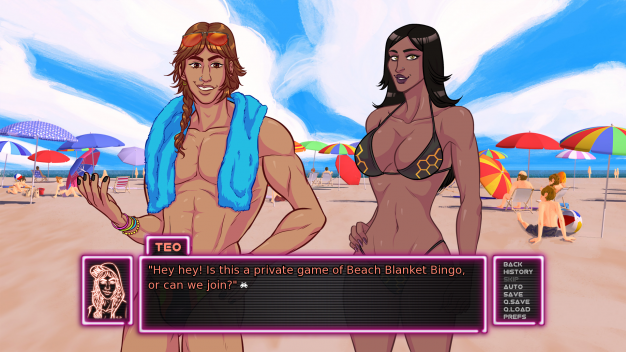 You are playing a romantic sim visual novel. So, there needs be some potential smooch-oids (people to kiss, I mean, the kissable).  Arcade Spirits provides you with seven romance-able characters.  Y’all get that? Sev-en. That’s seven possible story outcomes right there. Each of these seven have alternative stand-out personalities and range from aggressive pro-gamer QueenBee, to the more mellow arcade game fixer-upper Naomi.

Obviously, the interactions with each character can bring out varied moments of deeper impact.  I know I keep banging-on about that, but having played the game with a few different saves started and the alternated storylines are there, hunni. Having always been a fan of games that you can play over-and-over, it brings back some childhood feels. 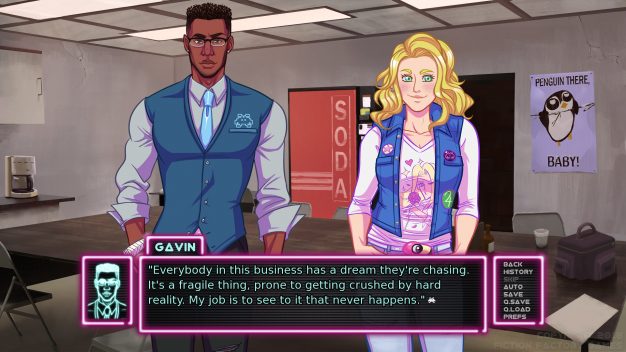 I went into Arcade Spirits anticipating that I might receive a much less satisfying experience. There is a definite monotonous aspect to any physical “playing.” However, what I wasn’t expecting to find was such well put together character development and story line. By the end of the second level I was hooked. Too quick to judge and Pigeonholing this romantic sim as being nothing more than a sloppy virtual smooch-fest.

There is just the right sprinkling of romance, story, engagement, and well put together visuals, to make Arcade Spirits one to check out.

Arcade Spirits has just the right sprinkling of romance, story, engagement, and well put together visuals.