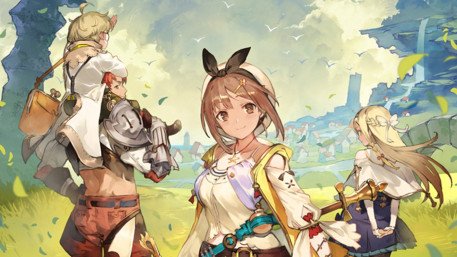 To date, there have been 21 entries in the Atelier series of JRPGs from Japanese developer Gust Co Ltd and publisher Koei Tecmo. I have reviewed one other game in the series, Atelier Sophie: The Alchemist of the Mysterious Book, and have played more than a few more since the release of the first game some 22 years ago. One aspect of this series that has always kept me intrigued was the fact that, in my opinion, none of the games play exactly like the last one. This can also be said of the latest entry, Atelier Ryza: Ever Darkness & the Secret Hideout, as it presents never before seen synthesis, gathering and battle systems.

JRPGs hold a special place in my heart and the Atelier series never fails to bring the goods by providing a gaming experience unlike anything else offered in video gaming today. Atelier Ryza: Ever Darkness & the Secret Hideout puts you in the shoes of Atelier Reisalin “Ryza” Stout, a young girl on the verge of adulthood who embarks on an adventure with her friends to discover what is most important to them.

As it is prominently placed in the title of the game, you need to master the art of alchemy in order to become the best Atelier that has ever been known. Gust has developed a new synthesis system that makes creating just about anything possible and is a novel new take on the alchemy theme of the game. Having the ability to throw together almost anything that you will need to make your way through this game makes for some very interesting moments while you’re perfecting your craft.

The world of Atelier Ryza is brightly colored and very fantasy-like in design with the environments and the character designs having a strong resemblance to the Victorian age if magic had existed at that time. You will make your way around Ryza’s town as well as the surrounding wilderness while on your way to fulfill a quest or just going out to collect ingredients to make potions, weapons or even tools.

The world is very large and you will need to perfect your Atelier skills if you are going to be able to hold your own against any of the wild and dangerous creatures you are bound to run into on your travels. The synthesis and battle systems complement each other extremely well so mastering both will be crucial to keeping your team at their very best.

The synthesis system is where you will learn how to use your alchemy skills to craft health potions, weapons such as bombs, or even gathering tools like an ax. Everything that you need to craft an item can usually be found on the ground, up in trees, being held by enemies, stashed away in chests or given to you for completion of a quest. Some recipes you will learn from other Atelier’s but others you will learn just from experimenting with the recipes that you currently have by just adding a new ingredient or two.

The cool thing about the synthesis system is that every item that you collect has a different value or additional components so when you are crafting something new, depending on the quality of the ingredients that you are adding, this will determine the quality and attributes that the finished product will have. No two created items are the same so it is very interesting to see what you will create each and every time you return to Ryza’s Atelier to craft more supplies.

While the synthesis system is very important to how the game works, the battle system has been revamped and gives the player more freedom to fight in your style by allowing you to control not just your own actions but those of your teammates as well. Battles happen in “real-time” with the player having the ability to switch their current character at any time. During battle, you will earn Action Points that not only trigger specific skills and increase the number of attacks, they can also raise the “tactics level,” boosting your learned skill effects to new levels.

You can also do mega damage to enemies by issuing “Action Orders” which are basically a combo attack that will exponentially boost the damage dealt to your opponent. Action Orders come in the variety of “do a physical attack” or “deal fire damage.” You then just need to sit back and watch as the character who gave the order follows up your attack with a powerful skill.

Visually speaking, Atelier Ryza: Ever Darkness & the Secret Hideout, looks amazing as if you are playing an anime. While the designs of the environments and the characters are fairly decent, I don’t feel like Gust was trying to push the visuals in a way that would have them stray too far from the style that the series is known for.

If you compare the visuals in this game to other games in the genre like Final Fantasy, there is a polish that FF has that Atelier Ryza does not have. That’s not a deal-breaker, however, and adds to the charm of the game. This series has a definite “look” that carries over from game to game and helps to make it feel familiar to returning fans while offering new systems to keep them coming back.

The sound design is very impressive and really sets the tone for the whole experience. The dialogue is in the original Japanese with English subtitles. It would have been nice to have an English dub but I don’t mind reading my games at all. In addition, the music that plays in the background while you are searching for ingredients or making your way to the next point in the story is fairly well composed. The battle tunes that play during encounters with enemies puts you straight into the action and makes for some very intense moments in the game.

I will have to say that in the beginning, you do a lot of walking around looking for stuff and the tune that plays in towns or during normal activities plays on a loop and got to be really unbearable after about the first two to three hours during my play-through. I tried turning the background music off in the towns but it just turned off all of the background music so I just turned it back on because the music if so very good during other parts of the game.

As I mentioned before, while all of the games in the Atelier series deal with crafting items and developing your abilities as an Atelier, Gust is always able to create a fresh take on how crafting is done. In this instance, the randomness of the quality and attributes that every item is built around as well as the effect that will have on the completed concoction or item makes for a very interesting way to approach this part of the game.

In a gaming landscape that seems to be dominated by multiplayer games like Fortnite, COD and Destiny, it is good to be able to find a quality single-player game that offers hours and hours of gaming enjoyment without having to find a bunch of friends to play with or struggle playing with people you don’t know. Atelier Ryza offers a deep story and an even deeper crafting system with challenging gameplay and a setting series fans won’t soon forget.

She gets by with a little help from her friends.

– BG music can get on your nerves at times.
– Visuals aren’t as polished as other triple-A titles these days.