Just when I thought I have seen it all…a game utilizing animal heads with human bodies comes and fascinates me. Chicken Police – Paint it RED!, or Chicken Police for short, is a film noir detective story about chickens investigating a cat and her ties with a hamster. Confused yet? Well, let me clarify. 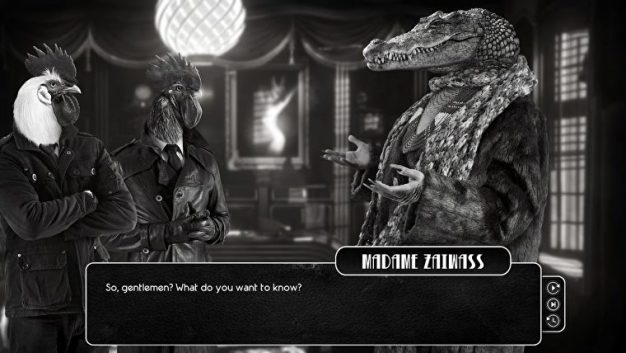 In Chicken Police, you take the role of an almost retired rooster named Sonny Featherland who gets enlisted by an elegant catwoman, Natasha Catzekno, to figure out who has been sending her nasty threats. When pressed for information, Natasha is not as innocent as she seems; not only is she the lover of a mobster boss, the hamster Ibn Wessler, but she also has a mysterious past that she keeps mum about. You can easily see how these two may be the reasons why she is in trouble.

Sonny enlists the help of his ex-partner, Marty MacChicken, who both in the past made up the legendary Chicken Police. There is history between the two, but luckily, that doesn’t hinder much in the investigation at hand. You do get bits and pieces of the history, and it involves and intertwines with Sonny’s ex-wife, but it’s not comprehensively fleshed out if you just do the minimum with completing the game. Even the game’s secret ending also hints that Sonny’s past may be explored further in a sequel or prequel. 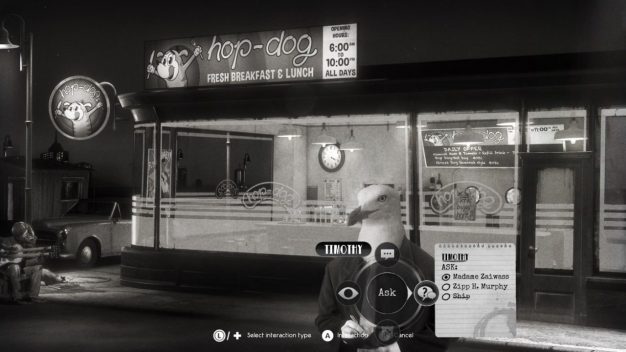 In order to investigate Natasha’s crazy situation, Sonny and Marty will have to question an eccentric cast of characters. I’m talking about owls, dogs, bears, crocodiles…pretty much what makes up a local zoo. The bulk majority of the gameplay of Chicken Police is asking the right questions. That’s right. There are certain characters that serves as blocks to the game’s progression, and the only way to get past it is to get a passing grade when you are interrogating them.

When Sonny’s interrogates these characters, he often gives a hint on that character’s eccentricities in order to ask the right questions. For example, a character’s cocky confidence can be utilized in order to drop his guard to the truth. While this sort of gameplay may seem like fun, it can be quite a head-scratcher for most who may not get the subtleties when picking which question to ask. It may take an average gamer multiple tries (i.e., replaying the game from the beginning) or even following a walkthrough in order to achieve the optimal solution for the investigations. 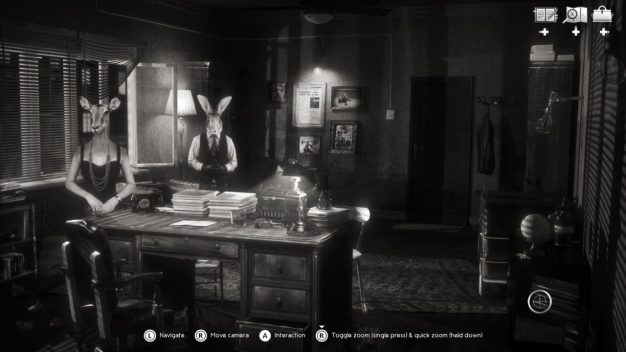 Along with the main interrogation gameplay, Chicken Police also utilizes some mini games such as a shooting game (of course a detective game should have one) to a simple crime board map. The crime board map mini game specifically summarizes what Sonny and Marty have learned so far and serves as a good break in the story’s chapters.

Chicken Police is a relatively short game. It takes about a couple of hours if you focus just on completing the main story, and an additional two to three more hours if you want to completely immerse yourself in the other things to see in the game. The game utilizes full voice acting in every interaction, which is great, considering this is from an indie developer. 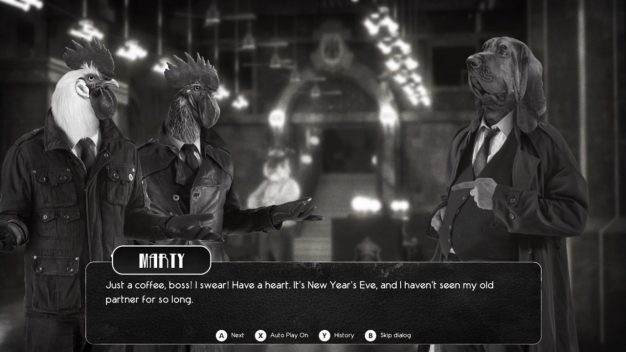 As a side note, the credits at the end shows all the species of animals used to create the cast of Chicken Police. Interestingly, the developers claim that these creatures are currently extinct. That’s pretty cool (and sad at the same time) to pay homage to animals we may never see again.

Interrogate Others to Solve a Crazy Clucking Case

– Interrogation gameplay may be confusing