When Shakespeare coined the phrase “to be or not to be,” I don’t think he was deciding whether or not he wanted little wings, a fluffy bottom and a predilection for pollen. Some of you, however, may have wondered what it would be like to be one of our little honey-making friends. If this is the case, Bee Simulator might be an ideal choice of game. I’ve been playing the PC version and my views are a bit mixed.

First off, I love the sentiment behind Bee Simulator. At the very least this game is bringing much-needed notice to an endangered species through the eyes of one of its members. This in and of itself is brilliant, we’re all good there. After this, I start having problems…

Bee Simulator is a game that’s clearly being pitched at families with younger children. The narrative is like something straight out of a kid’s TV show and for little ones this is fine. The problem here is that this is also a game that should have a message for everyone and the child-like narration, while fun, isn’t going to appeal to the adult player. This could be forgiven if there was a solid game here but I’m not sure this is entirely the case. I also need to mention that this review is obviously based on my views as an adult playing the game, as I’m not part of that intended audience I’m going to come across a little more critical than a younger player.

So you have the basic gameplay which involves you following story elements and flying about the place collecting pollen. I don’t do storytelling as you know but you’re basically working for the hive until your tree is threatened. The adventure to re-locate, (amongst other things,) begins from there. Pollen collection is expected, you’re a bee, it’s the way this is done that puts me off. Who remembers that much memed Superman game that just sees you flying through rings for hours? Take that and make the graphics look nice and you have a similar idea. It’s no more enthralling now when it’s been tarted up a bit than it was then.

After the pollen-collecting comes a series of mini-games. One of these is dancing. When other bees want to give you valuable information you have to copy their dance moves to open an indicator on the map. This is just basically a case of Simon Says. If you have any sort of basic pattern recognition skills and a half-decent memory this isn’t going to be any sort of a challenge.

Combat is another story. Is it fast-paced and dynamic I hear you ask? This would all depend on your definitions for fast-paced and dynamic. You get given a pattern and have to match it. This involves a string of colored bars, red for attack, blue for block. Hit the bars in order and you’ll succeed. Sound about as exciting as a conversation with a table lamp? Sadly, it is.

You will be given other jobs to do as you go through the game. These include races which would be fun if the controls didn’t feel so wonky. There shouldn’t be an issue with this on console releases but for us PC gamers trying to chase something while being hampered by a wobbly camera isn’t easy.

I’m going to have a bit of a moan about the graphics next. Before I do let me add a little caveat here. My rig is powerful but it isn’t top of the range by any means so some of my woes might not affect you. The graphics are gorgeous. Everything is just the level you’d expect from a triple-A game. They are also automatically set to ultra.

My first go at Bee Simulator left me with a thirty-minute bout of motion sickness thanks to bright colors and some really blurry effects. I switched things down in the settings and this alleviated the problem. This is, therefore, more of a general moan. We don’t all have brand spanking new PCs, please set the game to something that isn’t going to give us a brain hemorrhage and let us up the graphical quality if we want to.

This is a PC review so everything might be a lot rosier with a gamepad, but the controls felt sluggish and generally weird and a lot of this came down to the camera. As in many PC games, WASD is your movement and the mouse covers your line of sight. Movement is fine, the mouse control isn’t quite sensitive enough though. Instead of panning the camera in one fluid movement you find yourself moving the mouse two or three times to get you facing in the right direction. When you’re used to very smooth camera mechanics this feels really clunky and odd. Again this can be changed in the settings but these changes should be improving the experience, not righting it.

Bee Simulator can be seen in one of two ways. You can see it as a piece of educational software. It’s full of interesting facts and you’ll fill an archive with fascinating stuff as you go. You can also spend knowledge points on statues and new skins for your bee. This in and of itself is great but to want to learn all of that information you need to want to play the game. Gameplay isn’t really addicting so that might not happen for long.

If you are going to try and call Bee Simulator a game, you can, but it isn’t a very good one. The core gameplay isn’t engrossing and after that, it’s just a string of fairly simply put together mini-games. I completely get that you don’t want anything too hard when there’s a younger audience playing but by simplifying things this much you’re in danger of ruling out the rest of us. The story isn’t very long either so there isn’t a great amount of bang for your buck here.

As a side note … there’s the option to play Bee Simulator in co-op through either remote play or via split-screen. I’m not sure there would be enough here to make me want to keep playing for a long time on my own, let alone bring my mates on board. Having multiplayer functionality is excellent, but get the core of the game right first. 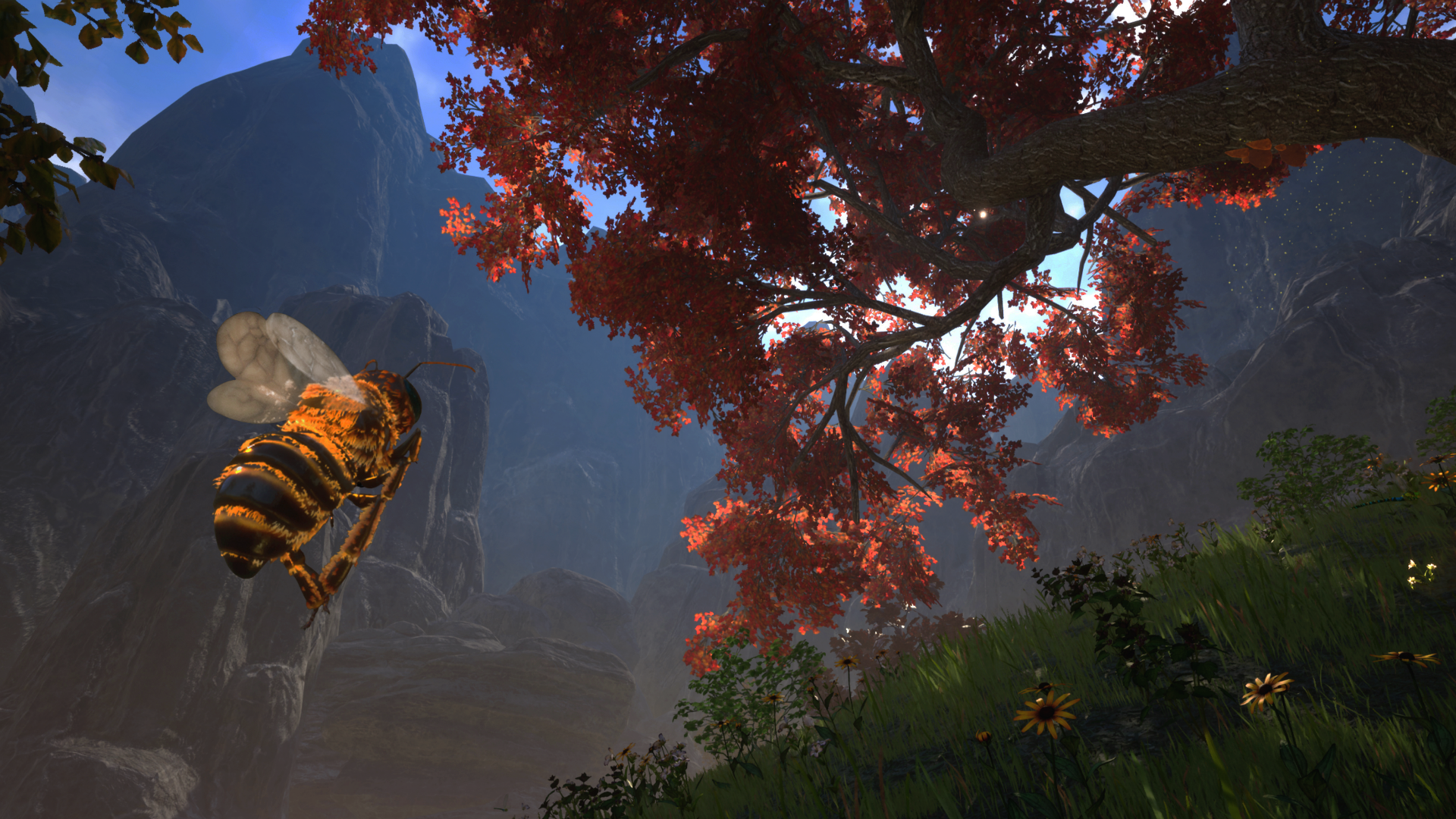 All in all, I’m really torn about Bee Simulator. I completely get what this game wants to be and what it’s trying to accomplish and I don’t want to take anything away from this. From a purely educational standpoint, the game is good but it’s still a game. I’m just not sure these two elements are working harmoniously enough with each other to make it worth your while.

The concept of Bee Simulator is great but the educational attitude this game takes doesn’t balance well enough with the fun factor that needs to be there. As a game Bee Simulator may be fun in short doses but I don’t think there’s enough there to keep a player coming back for more. It’s a clever, thoughtful title but is it fun? I think this is where this game lacks and as it’s fore-mostly a game and not an educational tool I can’t call it a roaring success.