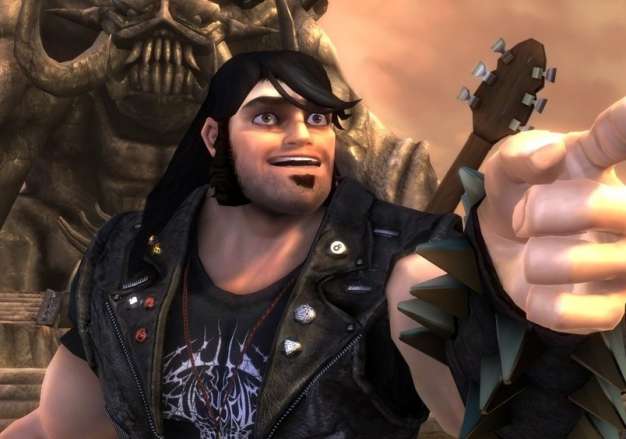 Schafer dishes on gameplay details (Eddie uses both his double-bladed axe, “The Separator” and his magic-infused guitar, “Clementine,” to battle demonic druids and nuns), and how a certain plastic guitar phenom paved the way for the ultimate umlauted-heavy metal game. “We got feedback like, ‘It’s good, but have you thought about making it a hip-hop game, or making it country?’,” says Schafer of the game’s pre-Guitar Hero pitches. “And then Guitar Hero debuted, and that stuff changed. Harmonix had such great taste when they created the tracklist. It’s obvious that music fans picked those songs. So metal really has had a resurgence.”

With EA officially backing this passion project, Schafer and the Double Fine crew have been working overtime to “fulfill the promise of all those lyrics and all that lore, and not have it just be another Tolkien-esque elves-in-tights fantasy, but a collection of everything cool that we like, all put together. You could go back to this fantasy world, but you bring your Camaro with you.”

That could not possibly sound more bitchin.