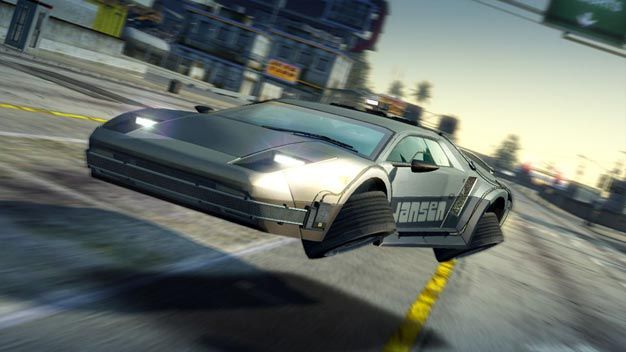 Let me preface this post by saying that I absolutely adore Burnout Paradise. I’m not a fan of those racing games with the whizzy hot rods and the laps, but the Burnout series is pretty much the cat’s bee pajamas in my book and I have 40+ hours clocked in the latest entry because it’s awesome and I don’t leave the couch, apparently. On top of that, being a child of the 80s, Back to the Future is one of the best movie series in history — if you talk crap about BTTF: Part 3 you’re just hopping on the bandwagon and should shut your lady of the night mouth — so this news is the gaming equivalent of peanut butter and jelly.

Criterion, in their efforts to push new content and keep Burnout Paradise fresh, have announced that the Legendary Cars Pack will be coming to their open-world badass car-o-rama including a modified, flying, DeLorean-esque version of the game’s Jansen P12. As an added bit of groin tingling, the car hovers! In other words, where this car is going, it doesn’t need roads and when it hits 88 miles-per-hour, I bet you’re going to see some serious sh*t.

On top of the Greatest Car Ever (TM), the update will feature 3 other vehicles: the Cavalry Bootlegger, Manhattan Spirit and the GT Nighthawk. The cars will be available for purchase individually or as a pack, but at this time no pricing or release date has been announced beyond sometime in 1985…I mean, 2009. Now I have to go add “Power of Love” to my custom soundtracks and you should do the same.