Possibly one of the worst kept secrets in gaming recently has been the often teased Battle Royale mode for the recently released Call of Duty: Modern Warfare. However, the game has now been officially revealed and it seems that the highly anticipated mode will not merely be an addition to the game but will instead be a free-to-play game that will be available to download by everyone on Playstation 4, Xbox One or PC, whether they own Call Of Duty: Modern Warfare or not. The standalone game, aptly titled Call Of Duty: Warzone, is available from 12pm PDT on March 10th, unless you own Call of Duty: Modern Warfare, where players can get early access to the new mode from 8am PDT on the same day.

Many gamers will likely sigh at the sound of another Battle Royale game entering what has arguably become an overly saturated, albeit highly profitable, market; however, Call of Duty: Warzone looks to introduce a number of interesting new features that can hopefully keep the game feeling fresh. The game offers players two modes, a familiar Battle Royale mode that pits 150 players together in a fight to the death and a new cash-grabbing mode called Plunder. In Plunder, players team up in squads of three in a race to get their hands on the most cash before the match ends. Cash is earned by taking down enemies to steal their earnings or by completing the new in-game contracts which can be completed to gain cash. The objectives that players must complete for contracts can vary greatly too, with some requiring squads to open a series of Supply Boxes, whereas others may require a squad to secure a location on the map.

It’s not just the new Plunder mode that includes interesting an interesting new take on the Battle Royale genre as the standard Battle Royale mode also has a few tricks up its sleeve. The most notable is The Gulag, a separate prison area where players are taken upon their first elimination. Here the eliminated players are pitted against one another in a 1v1 match where the winner is rewarded with redeployment back into the fight to help their squadmates. Players can also be redeployed once their squadmates earn enough cash to purchase a redeployment token from one of the many redeployment stations scattered throughout the battlefield. 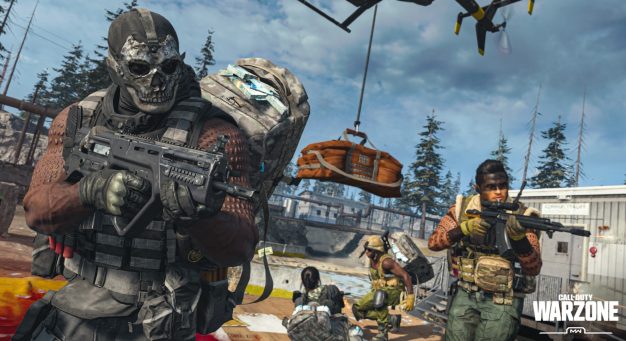 Speaking of the battlefield, no Battle Royale would be complete without a sprawling and interesting map for players to do battle on. Call of Duty: Warzone has players covered here with Verdansk, a large expansive city that includes over 300 points of interest. Players can zip across this map in one of the many vehicles available, including ATVs, SUVs, helicopters, and more.