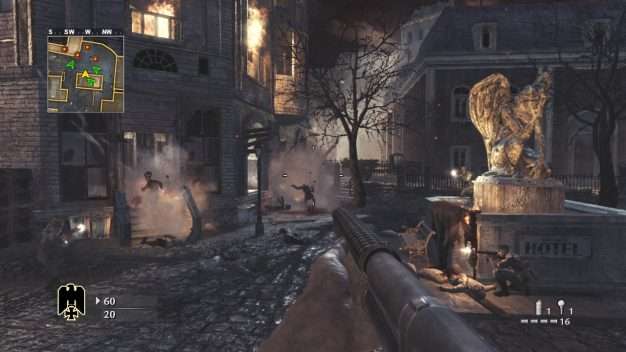 Earlier in the day we wrote about an upcoming map pack to Call of Duty World at War and a new stage for the Nazi Zombies mode. We hoped there would be more maps for the other modes as well and that we would learn about them soon. Well “soon” has arrived sooner than expected. In March we will be able to download four new maps to the game. A price has not been mentioned yet, but we do have some details about the new multiplayer stages.

Nightfire takes place in a Berlin filled with destroyed buildings and fire, Station is in an underground train station that is reminiscent of the Eviction story level, Knee Deep is on the island of Peleliu which is one of the last levels of the American campaign and Verrückt or Zombie Asylum is the new Nazi Zombie’s map. We may remember this map from the Asylum multiplayer level where everyone gets stuck in two rooms armed with shotguns and Molotov cocktails. We’ll list a price as soon as Treyarch announces it.