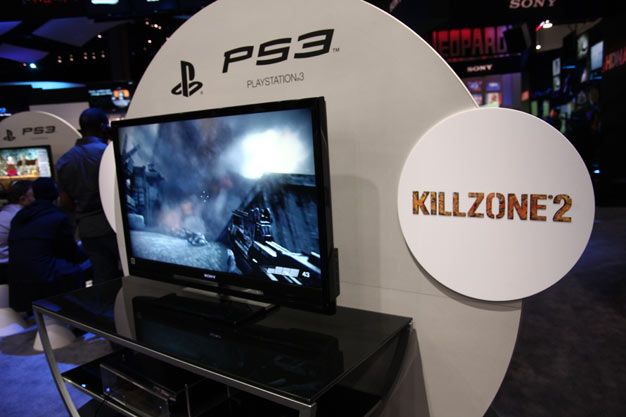 I hated the original Killzone on PS2. I thought it was a boring, run-of-the-mill FPS with horribly linear level design, so-so graphics and a story that couldn’t hold me even if it would’ve cuddled afterwards. Killzone: Liberation for PSP, on the other hand, was an amazing action experience that I so desperately wanted to see super-sized to play with the big boys in HD land as Killzone 2. To say Killzone 2 had the odds stacked against it would be an understatement and nothing short of it delivering me rainbows and sunshine could make it better. Here’s where I admit defeat. Also, I’m kind of a d**k.

What I’m about to say is very bold and will no doubt have some of you calling me bad names: Killzone 2 is the best looking console game ever. I say it completely without exaggeration because it’s true and I love you too much to lie.

The lighting effects are absolutely amazing, especially during a warehouse shootout where daylight pours in from holes in the roof and reflects in the area as if you were really there, complete with color bleed and discoloration. Character animations are very detailed, feeling lifelike, but without the creepy movements and expressions that haunt most other games. The game also oozes that cinematic feel all the kids are talking about these days with a subtle film grain effect and Michael Bay-esque explosions.

Ok, so the game looks nice, but is there some substance to go with the implants? You damn right. What I can equate the gameplay to best is pretty much an interactive war movie shot on a handheld, HD camera. The HUD is limited to an unobtrusive ammo counter and grenade readout — there are no health bars or navigation aides. Combat is fast, open and requires you to use the environment to your advantage. A first-person cover system is not only cool, but it’s your best friend.

With a 10-15 hour single-player campaign, multiplayer modes with mission objectives, bots, classes and experience points, I’m super, super excited for Killzone 2 to hit us in the face and pants this February. I saw its face, now I’m a believer.