True family is rare and means many different things to every single person on this earth. Defining family is much more complicated than simply opening a dictionary or listing off people who share blood relations. There are too many analogies and metaphors about family and what it means to us to list here, but there is one determining factor in all great family ties; if all the people you love were fighting an evil Corruption threatening to consume the world, ending all life as we know it, would you rush to fight by their side?

Children of Morta tells the story of a family tasked with saving the world, and even the gods themselves, from the evil clutches of the Corruption. The only dialogue in the entire game is told by a narrator, who did an impeccable job with his voice acting and was written beautifully. The family, known as ‘The Bergsons’ are vast in not only ability but numbers as well. It’s actually quite incredible how well they were able to flesh out almost every single member of the family in such a short time, and without any of them directly speaking.

There was the father, tasked with too much for any one person to handle, who wanted nothing more than to protect the people he cared about. The uncle, who had a preference toward the bottle, and had explored much more of the world than any other member of this family, who was also a skilled artificer. The pregnant wife and mother, who was terrified every moment her son left the house, and whose only positive thought left is the baby she’s more than ready to bring into this world. The oldest daughter, more capable than her younger siblings, whose focus, aside from saving the world, is her own relaxation. The younger brother, whose eagerness to assist his family and overbearing mother forces him to rebel and finds incredible strength lurking within. There’s more, but then we get into spoiler territory.

Now, the game itself is deep and wonderfully random in its systems, allowing for constant new experiences even when playing the same dungeon over and over again. In the game you can choose between different members of the family, while originally only having access to two, the number steadily grows the longer you play the game. Children of Morta does a very unique thing in that even when you fail to complete a dungeon, the story continues to progress, which gives the player the delightful sense that the characters are experiencing the same frustration you are.

The game isn’t hard, but it expects you to fail, in fact, it may even want you to fail. Every time you collect EXP, or currency, you keep it when you lose, meaning that every time you step foot in a dungeon you should be stronger than the last time you were there. The other thing of note is as you level up each character they will begin to give buffs to other family members, meaning leveling up only one character is actually ill-advised.

Another important aspect of the game is the differences in family members. Each of them plays into different archetypes, which really means you can play any way you want. I found the oldest daughter, the archer, the strongest in the beginning until I unlocked a big boi with a big hammer, and I began playing games as I always do, smash first, ask questions later. Deciding which ability to level up was never much of a struggle for me, as it became clear relatively early which things I should be focusing on if I wanted to continue to progress through the dungeons.

One small aspect which I did not enjoy was the Corruption Fatigue, which gave a family member lowered max health after you played them a few times in a row. I understand the purpose of it, the game wants you to play different family members, but towards the end of the game, I knew who my favorite was, and being forced to switch off to someone else for a few rounds sucked. 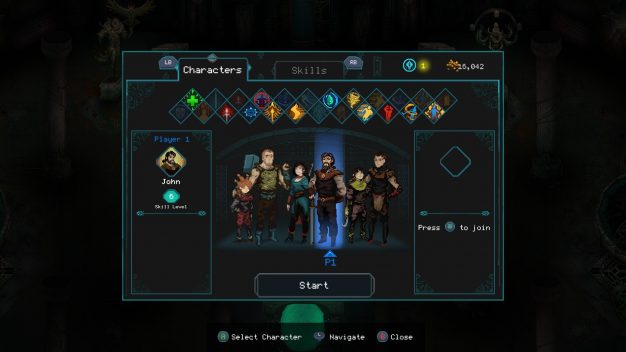 Another important aspect of the game is the overall randomness of it. Every time you step into a dungeon, whether it be for the first time for the seventh time, the layout of the whole thing will be different than you ever saw it before. The enemies will probably be the same, but what doors lead where, what extra events are available, where the door to the next level is, all of it is a mystery until you find it. Another piece of randomness is the buffs you obtain throughout.

There are three different kinds of buffs to pick up, permanent static abilities, such as more health, more damage, etc. There are also new abilities you can activate by pressing a button before they go on cooldown and static abilities that only last a certain amount of time before they disappear. All of it is different every time you go into a dungeon making for an experience that doesn’t feel repetitive, even if it’s a little too much about luck. I also ran into no significant technical difficulties, so that’s a plus.

Children of Morta did things I never thought I’d see done in a videogame. It tells an incredibly emotional story that feels engaging and truly is one of the most wonderful things I’ve experienced in all of fiction. I know, I’m really speaking a lot of high praise, but honestly I just really loved the story of this game. The overall game was a fun, sometimes frustrating experience that I didn’t think I would enjoy as much as I did. I played it on Switch, but it is also available on PC and PS4.

Love is the most important thing

The game is short, it only took me about nine hours to complete, and I found that to be the perfect length for it. Its story is compelling and never overstays its welcome.