I’m the proud poppa of two amazing baby girls. Raising daughters is many things; fun, rewarding, satisfying, but notice how I didn’t say relaxing? And that would be just one perk to playing a daughter raising simulator compared to the real thing. My daughter wants jeans that are way too expensive? I probably just need to earn some extra cash from a couple fetch quests. Oh, she wants a sweet sixteen party? Hey, I can just start a new save. Annoying high school boyfriend? I can shoot him! This actually sounds extremely promising. Let’s see if Ciel Fledge can check all the boxes and inspire my wife and I to go for baby girl number three!

Ciel Fledge takes place in the distant future. Humankind has survived an apocalyptic event in which a creature known as “the Gigant” has destroyed much of the world. Most survivors live on “Arks,” or floating aircraft carriers (Avengers fans, think Nick Fury’s Helicarrier). The alien threat of the Gigant still looms, but pales in comparison to dealing with an irate daughter for whom you purchased the “wrong” shoes. It is in this environment that the player adopts a roughly 8-9 year-old daughter that he or she will “bring up” in this uncertain world. Though not offering much more than that in terms of story at the outset, there was certainly enough mystery to spark intrigue and curiosity.

The game is dead-on accurate in terms of the modern day compulsion to over-schedule your kid. Scheduling your daughter drives the game loop. Rosie Rae (my in-game daughter) could participate in school, gymnastics, play dates, meditation and a variety of other activities. But be careful. Fail to schedule enough rest and your daughter may catch the sniffles, prompting the Ark equivalent of DYFS to show up and threaten to take away your child!

For fans of the life-simulator genre, the gameplay loop will do enough to keep you engaged. Schedule your kid correctly and win some simple turn-based encounters and watch the pretty green numbers increase. Early on, the benefits of stat increases are not clear however. It does feel logical though that increasing your daughter’s intelligence, etc, is probably a good thing. Between scheduled events, cutscenes introduce new characters and flesh-out relationships. As the game progresses, the story meshes a bit more and relationships develop. I felt a bit let down in that I found the dialogue to feel flat and mostly boring. Typically, dialogue scenes overstay their welcome and are mostly devoid of humor.

While the game plays out in weekly chunks, the parent is working; earning an income that is spent automatically on living expenses and voluntarily on shopping. Shopping is a true standout feature for this title. There is a huge assortment of clothing and accessories to choose from to outfit your daughter throughout the course of the game. Rosie Rae’s wardrobe is far more glamorous than either of my actual daughter’s will ever be.

A basic parenting mechanic exists throughout the game. Attend to your daughter and their affection toward you will increase. However, sometimes it is necessary to spend a little more time at work to earn some extra cash at the expense of some affection points. Such is life: a balancing act.

I did feel that an opportunity was missed by adopting your daughter as an older child rather than as a baby or smaller child. In real life, bonding occurs when it’s 4 AM and your daughter insists on building a fort rather than going back to sleep. Ciel Fledge just never really nails true parent-child interactions in any meaningful way. The player is typically observing scenes between your daughter and other characters, rather than with the parent. And, especially when she is young, Ciel is fairly devoid of emotion. She feels more like an adopted robot daughter that slowly becomes more human. Everyone knows that your daughter does not turn into a robot until she discovers Instagram as a teenager. 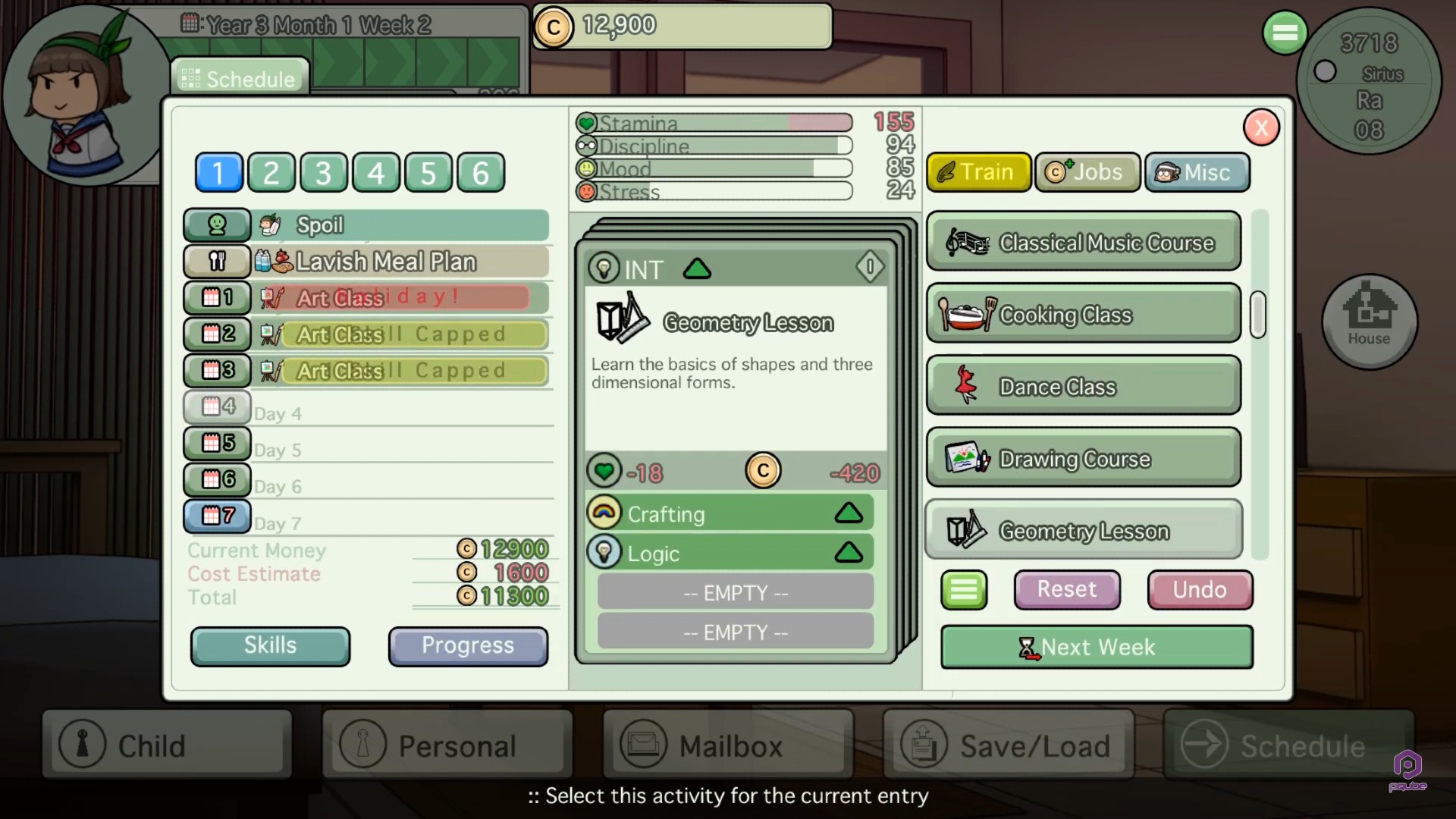 Unfortunately, Ciel Fledge does not do much to welcome new players, especially those unfamiliar with the genre. When the game opens, the player must immediately make decisions that will offer advantages and stat boosts. However, at this point, I had absolutely no idea what the boosts meant. This trend continued over the first several hours, as my daughter was constantly gaining attributes and her relationships with friends were gaining points and leveling up as well, yet it was still unclear what any of it meant. During this same time, I was bombarded with tutorials about gameplay mechanics that I found to be far more complicated than necessary.

The game is cute and charming in terms of its visuals. Characters are drawn more detailed during cutscenes and the anime-inspired models are simple, yet fit the feel of the game well. The color palette and general bubbly aesthetic are delightful to look at. Dialogue boxes and schedules are large and easy to read. 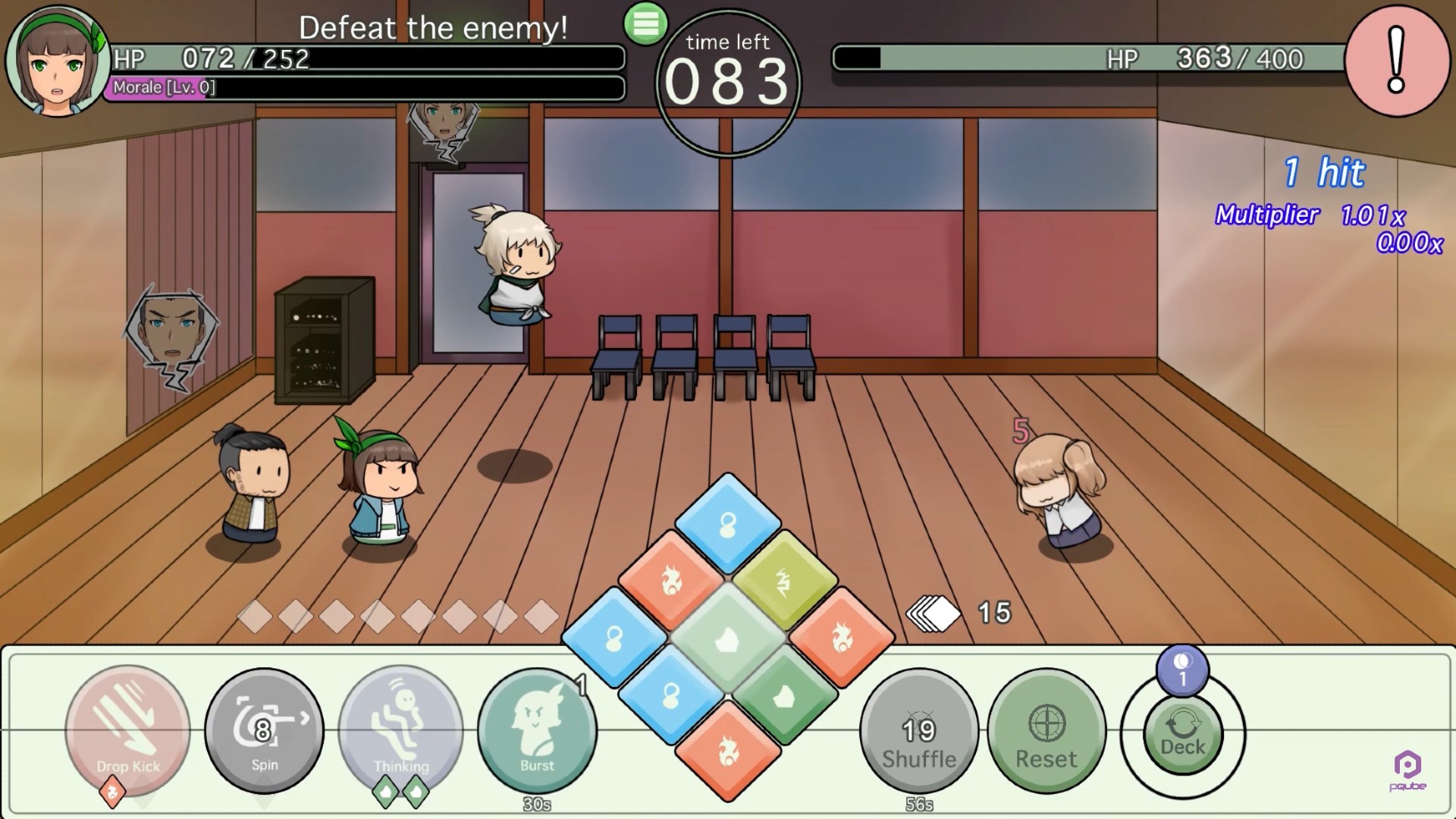 The music is a catchy blend of upbeat pop and funk. In this genre, similar situations are encountered frequently, meaning the same melodies will be heard repeatedly. Not dissimilar to real life, as I have listened to the “Sing” soundtrack while cooking breakfast with my daughter for the past 6 months. It is therefore extremely important that the score is of a certain quality as for the player to not become bored or annoyed. Luckily, the developers have achieved that here. Songs change for each situation type that your daughter encounters, varying things enough. I thoroughly enjoyed the soundtrack and thought each song fit the situation well.

For fans of the genre and games like Princess Maker, Ciel Fledge is an easier title to recommend. Those who know what to expect will feel a bit more at home. However, Ciel Fledge does little to welcome newcomers to the genre. There are simply an over abundance of tutorials that over-explain certain aspects of gameplay while totally neglecting other elements. And I do think an opportunity was missed in that there were not many realistic-feeling parenting decisions or interactions. Still, the scheduling and progression loops drive the desire to play “just one more week,” especially when exploring all of the wonderful wardrobe options. And the title is certainly charming and easy on the eyes and ears. Ciel Fledge is not for everyone, but it serves its audience well. However, I will be hiding this one from my own daughters to avoid questioning about why my video game daughter has far more clothes and jewelry than they do.

Find her a nice home