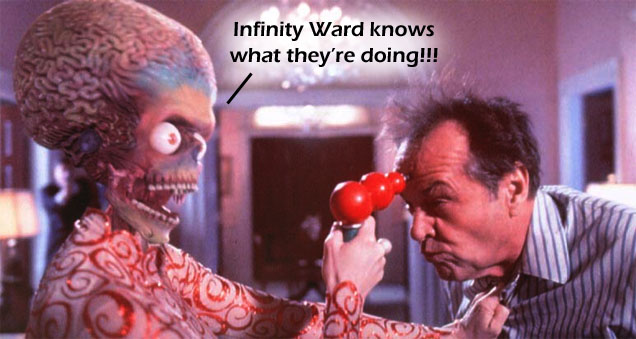 Without giving Call of Duty: World at War even a week to get on its feet, we have a fresh rumor about Infinity Ward’s next project to sink our teeth into.  Treyarch’s fifth iteration of the Call of Duty cannon looks to be shaping up nicely, and will hopefully set gamers straight on whether the CoD3 developer can pull together a high-quality title on the heels of 2007’s GOTY, but that’s not stopping the gaming industry from speculating on just how good the next-next CoD game could be.

Rumor has it, the next Infinity Ward-developed CoD title might take us into the future.  This speculation comes courtesy of some quotes that recently appeared on CVG’s news boards. “We are currently working on a new sci-fi title,” an IW insider reportedly stated, “We cannot release any more information as of yet, we may or may not announce it at E3.”

Interesting, no?  Now, this doesn’t rule out the possibility that they are working on a completely new IP, but if this rumor regarding CoD6 turns out to be true, I guess I can understand Infinity Ward’s train of thought.  They moved from WWII to present day and scored a major home run, so perhaps if they move up even further in time they’ll be able to repeat thier wild success, right?  Maybe.  While this news does put a little bit of a knot in my stomach, I’ve played so many hours, days, even weeks worth of Call Of Duty 4 that I am willing to put my full confidence behind whatever Infinity Ward thinks is best. I just pray that they don’t take my heart and crush it under a boot of arrogance, or I’ll cry… alot.