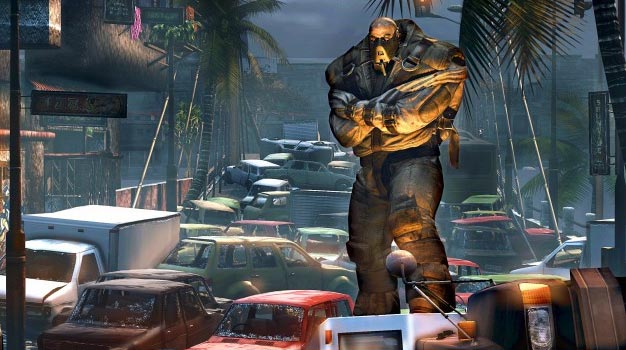 While the first batch of screens for Dead Island, Techland’s zombies in paradise project, showed the game would be nothing like “the campy world of Dead Rising,” the second batch showed it would be a lot like Left 4 Dead. Case in point: the straight jacket-sporting behemoth pictured above,  while bearing little resemblance to your typical tropical resort patron, would have no problem passing as a special infected from Left 4 Dead.

The latest issue of Edge Magazine has a one-page preview introducing some of the special zombies our four survivors — hotel staffer Xian Mei, ex-rapper Sam B, surfer Logan and bodyguard Purna — will have to face and fight if they want to live to see another lu’au. Dead Island‘s “charging, straitjacket-wearing” Ram, “explosive, boil-ridden” Suicider and “vomiting” Drowner seem to directly correlate with Left 4 Dead‘s Charger, Boomer and Spitter, respectively. But there are a few surprises, like the Butcher, “which uses exposed arm bones as weapons,” and the promise of non-undead dangers, like the threat of “local gangs and looters.” As for the standard zombies, they’ll come in the standard flavored stumbling and running variety. Can’t beat the classics!