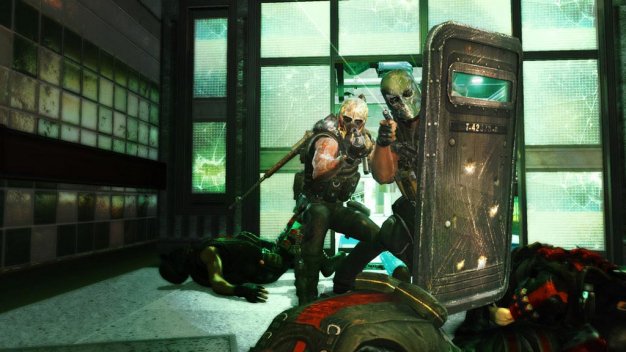 When the original Army of Two was released last year, it was easy enough to pass it off as just another Gears of War clone, but really it wasn’t according to EA Montreal’s Alex Hutchinson. He offered a few more thoughts towards the problems of the shooter genre when we asked him what it was like coming from Maxis, the developers of Spore, to a more conventional game like Army of Two: The 40th Day. “I think in the shooter genre or RPG genre, or any of these established genres people get stuck in a rut, they’re inspired by other games that are the same. So everyone right now making a shooter wants to be Call of Duty, or every time you make a third-person shooter, everyone says you’re Gears of War, which isn’t good.”

Its true when popular mechanics are introduced they’re quickly picked up by the competition. Just look at Halo‘s rebounding health meter, now a staple of the shooter genre, and what was the last third-person action game that didn’t have a cover system since Gears of War stormed the 360 in 2006?

“We need to bring some life to it, so the interesting thing about coming to Army of Two was that is was a brand that people liked, but hadn’t really established itself yet, it hadn’t had room to grow. I thought we could bring some of the learnings I’d had from Maxis to sort of bring it up a level.”

A focus on co-op and the use of unique environments has set Army of Two: The 40th Day aside from a lot of other third-person shooters right now, but its the gameplay mechanics that matter. Will they make 2010’s first shooter one of its best? January 12th will tell all.