There are tons of virtual reality games out there, and most of them come from independent studios. As such, their quality varies significantly, and it can be difficult to tell which games are worth playing. That’s one reason I created the TVGB Vivestream: to showcase games that you might be considering as an owner of a VR headset. This goal coincided with my job of reviewing Doctor Kvorak’s Obliteration Game, a comedy puzzle game that supports the HTC Vive for VR. It became the subject of the second episode of the ViveStream where I played it for the first time. It was…less than amazing. As far as VR is concerned, it was a bit of a mess. You can best see this in the stream, which will soon be up on our YouTube channel. 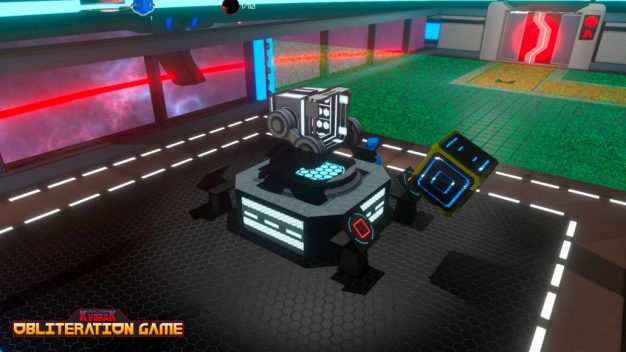 I’ll summarize the main points here. You play as a creature of some sort who has been roped into a game show being run by the supposedly god-like Doctor Kvorak. The game isn’t in first person; as a semi-present observer, you have to guide your character to solving various basic puzzles. If you succeed, you win a planet; if you fail, the planet is destroyed. All the while, the good doctor makes various comments. 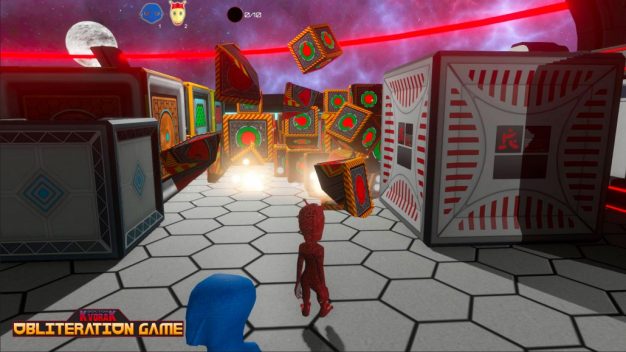 There’s a bit of clever humor hidden in there, but when playing on the Vive, all of the attempted jokes are silenced by the frustrating controls. The touchpad controls your character, and you change your own position using a similar teleporting mechanic to other VR games I’ve shown off. This means that you have to keep changing your position over and over again to get a decent view of your character. You can see me struggling with it in the video above. At the same time, the character controls don’t work properly either, which makes solving the puzzles an exercise in futility. I could barely get past the first stage before I got so fed up with these controls that I had to stop playing. It wasn’t a great VR experience.

Now, at least for me, this was billed as a VR game, so that’s the style of gameplay I’m basing this review on. I will, however, talk briefly about the non-VR experience. It was…interesting. The controls are a lot easier to use, which means it’s a lot less frustrating, but it still isn’t a game I would want to spend a lot of time on. The humor starts of decent, but it gets annoying after a while. Eventually I stopped caring about the characters. The puzzles are engaging enough, but not particularly inventive. 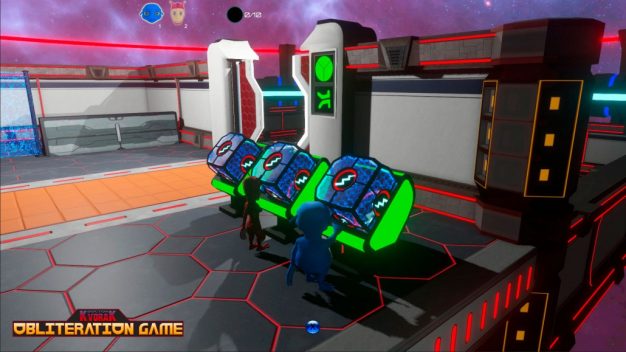 As a VR game, I cannot recommend this game at all. The controls are frustrating, and constantly needing to move around to control your character is nightmarish. Even without these VR hurdles, the game isn’t particularly polished, and it doesn’t really offer anything brand new. None of the characters are particularly endearing, even when you can understand what they’re saying. And while the humor can be entertaining, it can also be grating. I won’t say that there’s nothing to like here, but with so many great games out there, I recommend passing on Obliteration Game.

Maybe Wheel of Fortune is on...