As if Don’t Starve wasn’t already hard enough, the developer of the game Klei has ushered in more chaos with a new DLC called Reign of Giants. If trying to not go insane, freeze to death, or be beaten by the many monsters of the game were not enough, actual giants have been added. 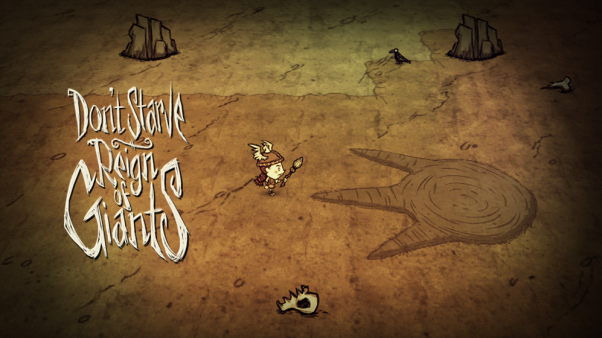 For those unfamiliar with Don’t Starve, it is an open world game on PC and PS4 where players take on the role of various characters as they wake up in a strange world and are only advised to stay alive. Sounds easy enough except for the fact that all deaths are permanent, you have to worry about your insanity level, and last but not least your hunger. The game is fairly challenging and every play through feels different since the world randomly generates and layouts tend to change.

The Reign of Giants DLC will also feature two new characters by the names of Webber and Wigfrid. While Webber can befriend spiders and grow silk, Wigfrid is a Valkyrie (or thinks she is) who gains power from defeating her enemies.  In addition to the new characters the DLC will feature new seasons, items, and enemies (some of which can be befriended).

With all these new additions I doubt many players will starve, instead I’m sure many will be pulverized or stomped. The DLC shows that Klei knows its fan base, many of whom seem to be gluttons for the punishment Don’t Starve casually gives out.  The DLC is currently only available on Steam Early Access. For more information you can check out Don’t Starve’s website.

About the author: Michael Phillips

Michael Phillips is a broadcast journalism major who spends his days working at a Los Angeles radio station and teaching for a nonprofit education company. He is an avid gamer who has been in love...  Read more...