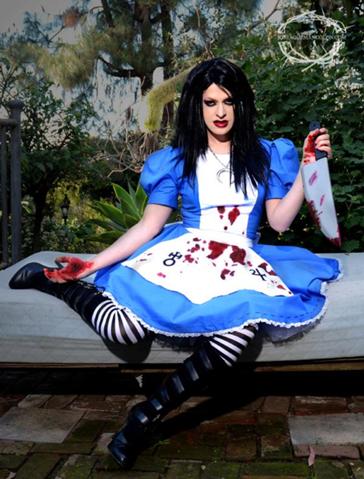 Spicy Horse Games, the peeps behind Akaneiro: Demon Hunters, American Mcgee’s Grimm, the Alice games, and winner of the “Coolest Name For A Developer” award, announced today that the winner of their Alice costume contest is none other than famous drag queen and RuPaul Drag Race contestant, Pandora Boxx. Speaking about her epic win, the jubilant Pandora remarked:

“I’m a huge fan of anything Alice in Wonderland. And when I first discovered American McGee’s Alice, I was enthralled. I loved his re-imagining of that world. Then with Alice: Madness Returns I fell more in love with the twisted Wonderland that American has created. Part of the appeal of being a drag queen is being able to create anything you want for your shows, so I had the Alice costume made by Dallas Coulter Designs and brought her to life on stage. When I heard of the contest, how could I not enter? Especially since I had an amazing homage photo shoot by Jose A Guzman Colon to enter with! I am over the moon that I won the contest! It’s a thrill and a great honor to be chosen by American to represent his vision.”

You go, Pandora (seriously, her photo is awesome). The one and only American McGee, CEO of Spicy Horse Games, had some words to share about choosing Pandora over everyone else. He noted:

“The first time I saw Pandora’s picture, I was struck by the mad intensity in her eyes. We asked her (along with a handful of other contestants) to submit a video audition and read some lines I’d written. Her performance brought to mind darkly dramatic scenes from some of the best Disney animated classics. I immediately wrote the team and said ‘THIS IS GOLD’. Everyone agreed.”

Sounds like the team couldn’t have picked a better person to represent their version of Alice! Ms. Boxx’s prize for winning the contest includes a trip to Shanghai to meet the Spicy Horse team and an appearance in Spicy Horse’s Kickstarter video for their upcoming OZombie title this summer (alternate version of the Oz universe inspired by all 14 of L. Frank Baum’s books? Just take my money).