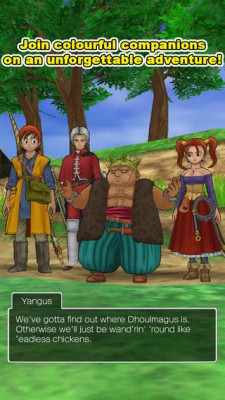 In commemoration of its tenth anniversary, Square Enix has launched the iOS and Android versions of Dragon Quest VIII: Journey of the Cursed King.

Originally released in Japan for the PlayStation 2 in November of 2004, the eighth installment of the acclaimed Dragon Warrior (known as Dragon Quest outside of Japan) franchise was met with a great deal of success, even placing fourth in a Famitsu poll for the best one hundred games of all time.

Of course, given the limitations of the mobile platform, some adjustments have been made to accommodate players on-the-go. First, the controls have (obviously) been altered, allowing one to play the game in one hand, though this was certainly possible on the PS2 controller.  Additionally, features have been added to allow players to auto-run through the game’s vast environments, along with a few other UI tweaks to compensate for the cramped view. The voice acting and orchestrated soundtrack have also been cut, which is a real shame for those who wanted to hear Yangus shout “Cor Blimey!” again.

The port is available on the iTunes and Google Play stores for $19.99.