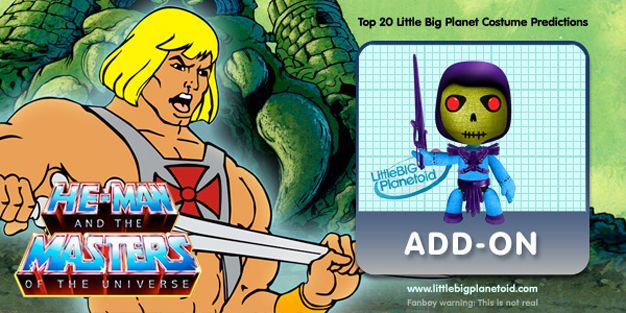 Among our favorites are the 80’s inspired selections ripped right from our collective childhoods, some of which are pictured after the jump. Sony would be wise to get to work on the A-Team Pack immediately, as we pity the fool that don’t want a mini Mr. T runnin’ around their cardboard cutout universe. 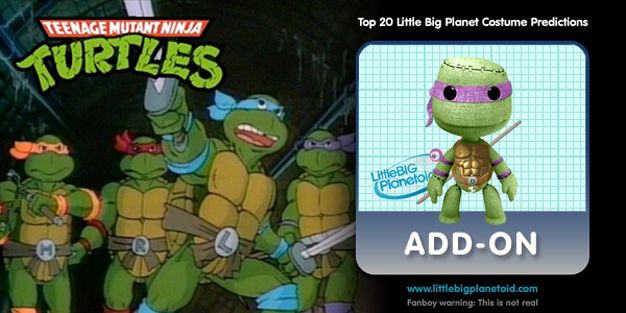 “Sackboys are set to swim in a canister of toxic ooze and mutate, with this new level pack based around the shellshocking, pizza eating, Ninja Turtles! Turtle fans rejoice, Raphael, Leonardo, Donatello and Michelangelo costumes are included, along with their iconic weapons to wave about in the face of danger. In the UK The pack will be censored and renamed to the ‘Teenage Mutant Hero Turtles pack’, for no apparent reason.” 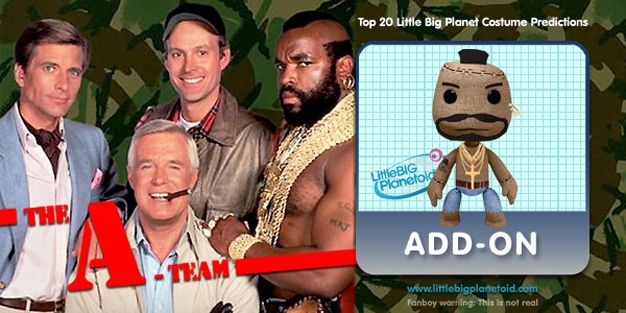 “After the success of the He-man and TMNT packs, Sony continue to plum the depths of the 80s, and have come back with the A-Team pack. Four incredible costumes of B.A Baracus, “Howling Mad” Murdok, Faceman, and Hannibal come to LittleBigPlanet, along with a pack of levels, the most exciting part of which is when players must use their Create pop-it abilities to convert a simple automobile into a weapon of mass destruction. I love it when a plan comes together!” 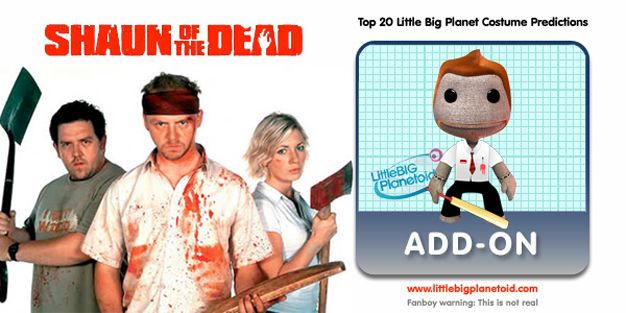 “To mark the upcoming 10 year anniversary of cult British Sitcom, Spaced; we introduce to you the Simon Pegg Tribute Pack. This pack comes jammed with 3 costumes of Simon Pegg’s most popular roles: Tim (Spaced), Shaun complete with cricket bat (Shaun of the Dead) and Nicholas Angel (Hot Fuzz). Two bonus side-kick costumes are also included: Zombie Ed, the zombified version of Shaun’s closest friend; and camo-clad Mike Watt, complete with tank vehicle (ready to invade Paris). No levels are included with this pack, although there is a wealth of zombie stickers and original comic artwork from Tim Bisley’s portfolio, plus an exclusive audio object which includes Grandmaster Flash and Melle Mel’s White Lines (Don’t Don’t Do It). How’s that for a slice of fried gold?” 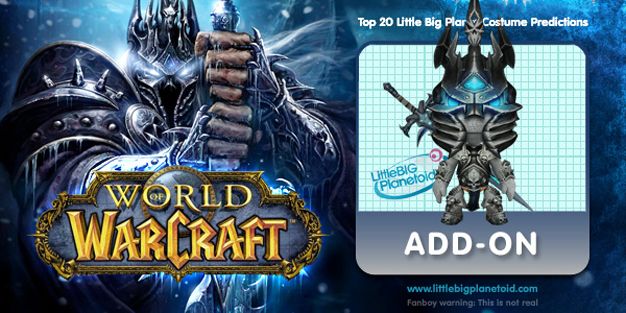 “Sackboys are called through the dark portal to Azeroth, and sent to Northrend, to join the ongoing struggle to stop the Lich King from spreading his plague across the LittleBigPlanet. Costume pieces based on iconic armour tier sets for each class in the game, and an unlockable set of Lich King armour for those Sackfolk who are unable to resist Frostmourne’s call, and wish to sit on the Icy throne themselves. Levels, made in conjunction with Blizzard, contain missions such as killing 40 snow badgers, and a final Raid encounter against Arthas himself.”