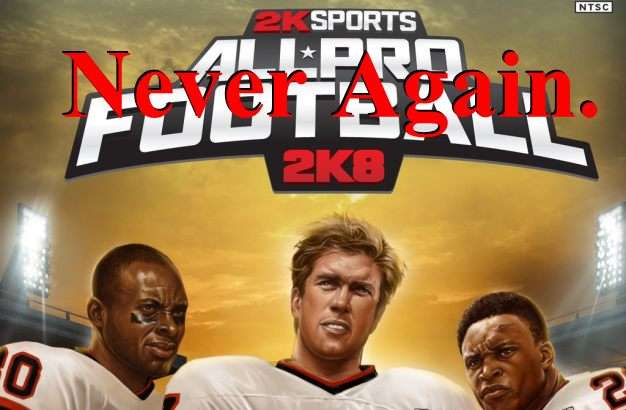 The day EA signed a contract with the NFL for Madden to be the only NFL sanctioned football game was a sad day for gamers everywhere. While the Madden franchise hasn’t disappointed too much over the years that it has truly been the only game in town, it still cuts back on the variety and choice of games one can pick-up that involve the NFL. Plus, some of us just randomly hate Madden and would really like to have the option to play something else. I’m not naming names here, but let us just say his first name is M_tthew and his last name is _azak.

Well now Mr. _azak finally has some hope that he can once again enjoy the NFL outside of EA’s grasp. GamePolitics is reporting that a new case in the supreme court may make EA’s exclusive NFL rights illegal. The case is American Needle vs. New Orleans Saints, et al. and should the court side with American Needle it would put EA (and Take-Two, who has exclusive third-party rights to MLB) in violation of federal antitrust statutes. In layman’s terms it means they would be seen as attempting to make a monopoly, which, outside of board games, is very illegal.

A blog that follows the supreme court called SCOTUSblog, lays it out for us: The NFL used to license American Needle to sell hats that bore the logos, the names or other insignia of pro football teams… But, in 2000, the NFL opted to solicit bids for an exclusive license to produce caps and other headwear. Reebok won the bidding, and in 2001 got an exclusive ten-year license. American Needle’s license was not renewed. So it sued the NFL, all of its teams, NFL Properties, and Reebok. American Needle’s case was thrown out by lower courts… “The [Supreme] Court has stated, on more than one occasion,” American Needle asserted, “that application of the Sherman Act to professional sports teams is wholly consistent with Congressional intent…”

This is basically what happened to 2K Sports when EA signed its exclusivity deal with the NFL. Thus if it is illegal for the NFL to do it with clothing than it is illegal for them to do it with games too. GamePolotics also reports that this case has been brought up multiple times in the class-action lawsuit Pecover vs. Electronic Arts. So this case is definitely on EA’s radar.