I would like to think society has come a long way so far in gender equality through the culmination of women’s sports like the LPGA, WNBA, Women’s tennis and bowling, along with many women competing in the Olympics. Then again (thanks to Legalzoom.com) there are still occupations and laws that keep women just under that bar of their own self expectation.

In Florida it is illegal for women to parachute on Sundays. In a small city in Texas women can rack up one year of prison time for adjusting their stockings, and in Michigan women have to check with their spouse before going to the hair stylist because it is law that women’s hair belongs to their spouse. But as you think about the negative, in this generation there is almost always someone willing to step up and celebrate the female form.

EA Sports and UFC did just that. 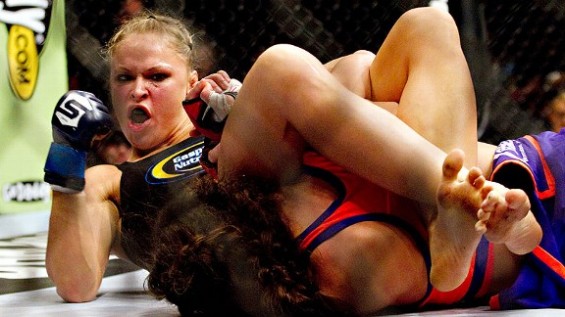 EA Sports has announced that they will be adding the women’s division to the upcoming UFC 14. This news comes off another historic press release announcing champ Ronda Rousey and number one contender Miesha Tate taking over as coaches for ‘The Ultimate Fighter’, the popular TV reality series.

Dean Richards, General Manager of EA Sports UFC commented, “this is a great moment for videogames and for Mixed Martial Arts. In our commitment to delivering the most realistic fighting experience ever achieved, we wanted to represent the full spectrum of talent and diversity of all the fighters in the sport, including women who have become an undeniable force to be reckoned with.”

UFC 14 will be available for PS3 and PS4, as well as Xbox 360 and Xbox One. Although there has not been a release date, UFC games have traditionally released in the spring.