I find myself conflicted with hypocrisy in writing that Japan will make its mark on 2012.

You see, I want to tell you that the year will be spearheaded by fresh, innovative experiences and new IPs from the land of the rising sun, but that’s a sentence filled with half-truths and self-doubt.

For me, 2012 is very much a year where I’m far more looking forward to eastern releases than western ones. My most anticipated games of the year reads something like Binary Domain, Gravity Rush, Asura’s Wrath, Yakuza: Dead Souls, Dragon’s Dogma, Metal Gear Rising and Resident Evil 6.

Now, I want to beat my chest about those games and say that they’re doing things that no western developer has done before – and I even tried to do so in an earlier draft – but it’s just not true. Binary Domain, despite its fascinating premise, looks just like any other TPS at its core and Dragon’s Dogma holds my interest because I’m so in love with Dark Souls.

Then there’s Resident Evil 6, which doesn’t make much a case for originality with the number it bears in its title, paired with the fact that it’s the third RE game out this year and is trying to take a page from Call of Duty’s book. Metal Gear Rising is trying something new within its own series, but it’s still firmly rooted in the 20+ year old franchise.

Yakuza, one of my favourite gaming franchises, will be seeing its third release in as many years with Dead Souls, which, somewhat humiliatingly, adds the now-tired western cliché of zombies to the gameplay. Asura’s Wrath and Gravity Daze are in truth the only titles that seem to carry any originality, and it’s well-known that Wrath’s demo split gamers down the middle (I personally was a big fan).

Coming out of 2011 I carry some incredible experiences with me. I absolutely adored both Uncharted 3 and Dead Space 2 but it was Dark Souls that shined brightest. I’ve written countless times about my undying love for From Software’s RPG, and I thought that it would prove to be a bit of a turning point in my gaming career. I thought I was through with the ‘cinematic’, linear experiences that a lot of western developers have offered us in the past year and would instead refocus on original experiences that only games could deliver once again.

Not that I consider western development to be below me; I’m still very much looking forward to Halo 4, Mass Effect 3, BioShock and the rest, but I want to recapture the magic that only Dark Souls gave me last year, and I thought Japan was the place to do it. But as I look at that list I realise I might have been fooling myself a little.

And you know what? I’m okay with that. 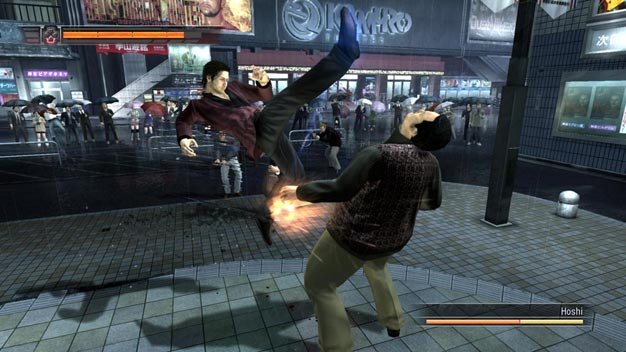 I was fully aware while playing Yakuza 4 (let alone 3) that I was essentially playing a reskinned version of the original two games seen on PS2, and that didn’t stop it being one of my favourite games of the year.

Yes, it’s the sixth bloomin’ Resident Evil game, but I’ve really enjoyed everyone up until now, why stop here? And Metal Gear? Heck, if I loved the cut-scene-ridden, borderline movie that is Metal Gear Solid 4, I doubt there’ll ever come a day when I tire of that series.

I’ve come to realise that, in my love for Japanese-developed titles, I don’t separate myself from the mainstream gaming scene as much as I originally thought I did. Sure, I’m tired of post-apocalyptic wastelands and edge-of-your-seat-shooters, but instead I favour tried and true mechanics found in Japanese development.

And, to be fair, there’s still an element of the unconventional and spectacular surrounding Japanese releases that draw me to them. Yakuza can weave a thrilling mafia yarn and yet still include a pants-wearing, free-running pervert in every one of its titles. And the Resident Evil series, for all its explosions and cover-systems seen in recent games, still boasts that loveable silliness to it that was apparent in the first game. You could even argue that that same charm is absent from the western-developed Operation Raccoon City.

Another confession of an earlier draft; this article was originally about Japan’s westernisation. And while that’s very much a relevant topic to talk about, I quickly found it unfair to label the issues I see here of constant franchise reiteration and lack of innovation as western traits. After all, how many Final Fantasy games have been released since the original? The same question for Monster Hunter and Dragon Quest. And that’s without even mentioning Nintendo, who have largely stuck to the very same characters and creations that debuted with the NES in the 80s.

Perhaps the current state of Japanese and western development really isn’t as different as it first seems. I’ve always found their fondness of the supernatural, silly and over exaggerated dramatics more appealing than the Hollywood approach many of today’s conventional western games capture. But moving in 2012 it doesn’t seem like there will be as much to separate Japanese and western gaming anymore.

If that’s good or bad, I may not have an answer to until this time next year. It won’t stop me looking forward to the sixth Resident Evil game, though.