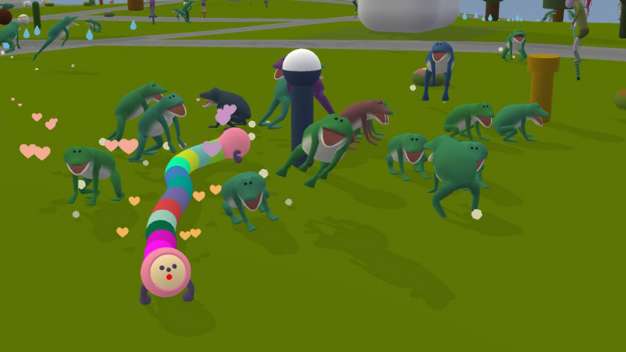 As if this scene requires any additional explanation.

We haven’t had any difficulty describing Noby Noby Boy. Monstrous. Nightmarish. See, it’s as natural and automatic as the uncontrollable fear we feel every time more screens or videos of this multi-hued horror surface on the web. But apparently there is still some confusion out there concerning creator Keita Takahashi‘s follow-up to Katamari Damacy, which has led the man himself to try explaining the upcoming downloadable title, releasing this Thursday, on the official PlayStation blog.

“It may sound strange that I, creator of this game, have had a hard time trying to describe the type of game [it] is. Since the beginning of its development, I still haven’t been able to give a clear answer when asked,” said Takahashi, whose goal was to make a game that couldn’t be expressed by words in the first place.

“Basically players can control and stretch Boy, the main character of the game. As players stretch Boy, the lengths to which he grows are uploaded to a persistent character known as Girl, who grows at the same rate as the combined length of all the players in the world. Girl starts at Earth and expands around the solar system. When Girl reaches a new milestone in the solar system, new areas are unlocked as playable stages for everyone around the world.”

Whether that clears things up for your or not, it’s the best Takahashi can do. Afterall, his intent was to make an “undefined and ambitious game” that was “not easily describable.” Not in words anyway — a soft, scared whimper speaks volumes.