It’s feature time at TVGB. These days there’s the chance to dance and get fit wherever you look on the gaming scene. Over the course of the next few weeks Tina here will be studying the rise in popularity of excergaming, proving it to be around long before Nintendo’s Wii. Enjoy, couch potatoes!

A specific wave of video games is relegating Billy Blanks, Jane Fonda, and, yes, I admit, Richard Simmons to our media cabinets.  Exergaming, the phenomenon that combines exercise and video games is making its way into every facet of our lives.  The five-by-eight foot space in front of our television sets is being increasingly taken over by motion control games, those games that are controlled entirely by body movements.  With state-of-the-art technology – namely from Nintendo, Sony, and, most recently, Microsoft – we now have a myriad of systems to choose from.  VHS, no more!  Bring in the video games to whip me into shape.

‘Exergaming’ has been coined as a rather catchy media term to detract critics from the notion that gamers are typically exercise-averse.  The word officially entered the English language by appearing in the Collins English Dictionary in 2007.  As a field that has been gaining momentum since the 1980s, the field of videogame exercise is poised to only increase followers.  From scientific circles to educational organizations and professional sports teams, the games we play in our homes have found a footing in our society’s agenda to improve our overall well being.

My first brush with action-packed video gaming took place at an arcade at a mini-golf/go-cart/batting cage emporium in my suburban, Chicago hometown.  A rather astute young man was going at it on a Dance Dance Revolution round for what seemed like hours.  Dripping with sweat and oblivious to those around him, Mr. DDR let his Airwalks meet their maker with every step he matched from the screen to the mat.

Konami, the creator of the 1998 DDR game, has certainly capitalized on its early success.  With Sony carrying Dance Dance Revolution over from the arcade to its Playstation, consumers were able to have their own dance mats in their living rooms and brush up on their dance skills at home.  Other early games that featured an under-foot mat included Nintendo’s Dance Aerobics with the Power Pad and Atari’s Foot Craz.  The Power Pad games reached respectable commercial success.  The Atari product, eventually, like much of its franchise, did not fare as well.

Exercise machines are also no strangers to the gaming world.  Nintendo and Life Fitness released the short-lived Exertainment system, which featured a pedal-driven stationary bicycle.  These days, the Gamercize machines are compatible with each of the Sony, Microsoft and Nintendo systems, and Expresso offers a rendition for consumers.  Although lackluster in their gaming appeal, they are undoubtedly items that many people are dropping money on to lose pounds.

As who was the most visible contender in the media in the 2000s, Nintendo made a comeback to the fitness video game business in a big way.  Not only as an entertainment tool with secondary physical benefits, the Wii become a solid means of getting healthy.  In 2007, Nintendo released the WiiFit. From then on out, the Nintendo became a staple for women everywhere to cancel their yoga center memberships and peacefully train on their Wii Balance Boards.

These fitness games are even changing the way the scientific community thinks about treatment for neuromuscular disorders.  Take Wii-hab for instance.  Parkinson’s Disease patients show some evidence of improving motor control after playing the Wii after a period of time.  Some users show how even autism might be seen as less of a disability with the Microsoft Kinect.  For autistic children who find traditional video game controllers difficult to master, taking advantage of the gross movements that control the games makes one more activity easier.

One only needs to look to two major metropolises to see how more and more children benefit from fitness gaming.  In Chicago, children’s athletic training programs have been leveraging virtual fitness for their agenda.  It’s all about the children, and they have been getting ample attention in New York public schools.  In lieu of a traditional gym class, an elementary school in the Bronx tried out WiiFit on a group of students in 2009. 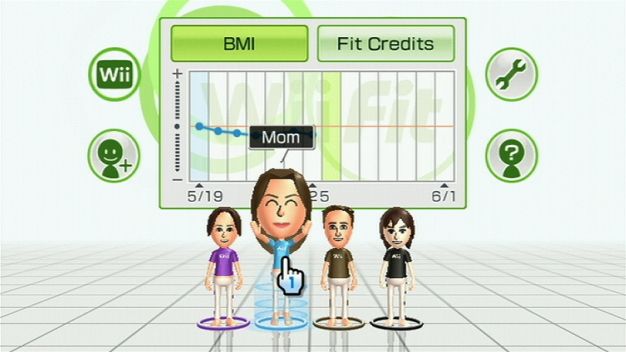 The exergaming world has had its share of wrong turns, however, but many of today’s games are pretty engaging.  EA Sports Active suite of games, The Biggest Loser empire, and Wii FitPlus are all experiences that I am willing to try.  My personal favorite right now is Dance Central 2 for the Xbox and Microsoft Kinect.  In fact, anything that has to do with Kinect has a certain je ne sais quoi about it.  This system has somehow managed to capture the interest of the most unlikely candidates.  From girls claiming on their blogs that it is their workout of choice to dogs running around robotics conferences with a Kinect camera on their heads, well, it’s held me captive.  The new Dance Central 2 is a game that brings me back to those first days of Dance Dance Revolution, when we spent evenings gawking at the professionals at work.  I don’t believe that I’ll miss the familiar faces of the old-time fitness gurus on my TV now that I am the one in control.