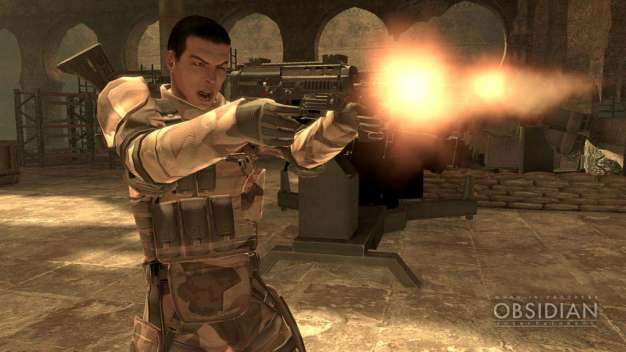 Judging by the 20 minute presentation I just watched, Obsidian’s Alpha Protocol is what happens when you combine the stealth espionage setting of a Metal Gear Solid title with the customizability, dialog and story branching, and play mechanics of Mass Effect. That, and you can wear funny hats.

The presentation opened with the main character Michael Thorton in his swanky digs. In these digs, he has the now-essential bookshelf-but-really-a-weapons-cache-after-you-press-mute-on-the-remote, and a bathroom where you can customize the crap out of Michael. Want him to have a beard? Go for it. Snow cap? Done. Want just the ol’ clean cut look? That’s fine too, just bear in mind that he looks a little like Leonardo DiCaprio in Body of Lies. Being a spy game, I asked if all these face options would lead to any disguise mechanics in the game, which they unfortunately do not. While the armor you choose can affect how characters react to you, there will be no games of Master of Disguise.

The focus in this game is on stealth action. And while equipment is one part of it (heavy armor is louder, stealthier armor is likely weaker, etc.), this is an rpg, so you get a wide range of attributes to affect as you go through the game. You can, ultimately, create a hulking warrior who can destroy any and all with little subtlety, but stealth is certainly rewarded most.

The storytelling is the part that was most hazy, but also has the most potential to make this title shine. We were promised a dialogue tree as intricate as one in Mass Effect, but also more tense. Not only do you have a limited amount of time to choose your response, but you will never be able to repeat a conversation. Once things are said, like in real life, they are said. This then leads to how characters respond to you, and these relationships are quantified in replacement of a morality alignment like in many RPG’s. This seems to be a potentially new trend, as Dragon Age touts a very similar system.

Combat looks like fun, if a little basic. It’s third person, over-the-shoulder, cover and shoot action. The one thing that’s added to the mix is martial arts for those close and personal moments. With any luck, this will be awesome. Being hands-off, I can only tell you it looked like melee attacks dealt by Solid Snake.

It has some chops, but we’ll have to get some hands-on time, and a lot of it, to really see how this game unfolds.The trouble with a 20-minute glimpse of an rpg is that all you get really is a glimpse. Story is a huge part, and not surprisingly, we only know so much about it. Here’s hoping the games meshed together here make something that really shines.