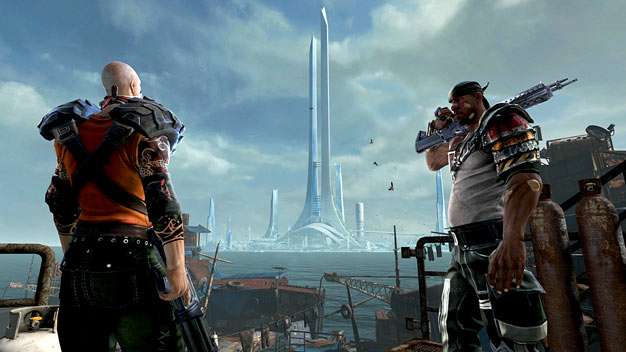 If someone asked me to sum up my thoughts on Splash Damage’s Brink that’s what I’d say without trying too hard and hurting myself. However, it’s my job to try too hard and hurt myself, so sit on my knee and I will tell you why Brink stood out at E3 2009 like the tower in the image above (or awkward people hitting on booth babes) and why you should probably tune into what its broadcasting.

In a little room with comfy chairs above Bethesda’s E3 booth, Paul Wedgwood, CEO of Splash Damage, gave us a first-hand look at the gameplay and what exactly their sci-fi FPS is all about. The game takes place in 2035, atop an isolated city floating in the sea, built to be the ultimate utopia called, “The Ark.” And what would a utopia be if it didn’t ultimately become dystopian? This is exactly what happens to The Ark, the reason of which was not explained, and a war between the city’s Security force and the Resistance is waged. It’s not the most original story, assuredly, but the proof is in the pudding and from what was shown off, Brink may be all pudding. Delicious pudding.

The best way to describe the gameplay is that of a multiplayer mentality meeting a single-player game. There’s a strong narrative that runs throughout the game with the ability to play as either Security or Resistance, but it’s a class-based system allowing for up to 7 friends to jump in and out of co-op on the fly and with pretty in-depth character customization feature. The basic look of characters can be altered like face type, scars, tattoos, clothing, etc. as well as weapon load-outs for the different classes. Brink basically takes the multiplayer formula introduced by Team Fortress and latter-day Call of Duty, marries them together and tops it with its own brand of hot fudge.

The mission shown involved Security infiltrating an area known as “Container City,” a dirty, dimly-lit, labyrinthian section of the city built with shipping containers, and escorting a diffuser robot to find a bomb that threatens to cause much disarray. Since the game relies on an actual story to unfold and aims to jump from single-player to multiplayer with nary a hiccup, the player controls the flow of the action. At the press of a button, the player can bring up an objective selector wheel. The objectives help push towards the end goal while also being a source for XP which opens up new weapons, upgrades, skills (these weren’t shown) and further player customization options. Depending on the chosen class, that can be changed by simply heading to a command point and making the all-important choice, objectives will change; if you’re an engineer type you may have to setup a turret at a specific point while a solider type may have to blow something to smithereens. A full list of classes wasn’t revealed, but the TF2 playlist seems like a good guessing pool.

As shown, the game is only in the pre-alpha stage, but it’s already looking solid. The graphic style is heavily reminiscent of the Timesplitters series with slightly exaggerated character models and vivid, eye-catching environments with an almost comic book sheen to them. Watching the demo, there seemed to be an actual weight to the character. It’s tough to describe, but the way the gun swayed, the reload animation and how vaulting and sliding were handled in first-person, it felt like something that had some actual immersion to it. Did I say “vaulting and sliding”? Yes. And it’s very cool. 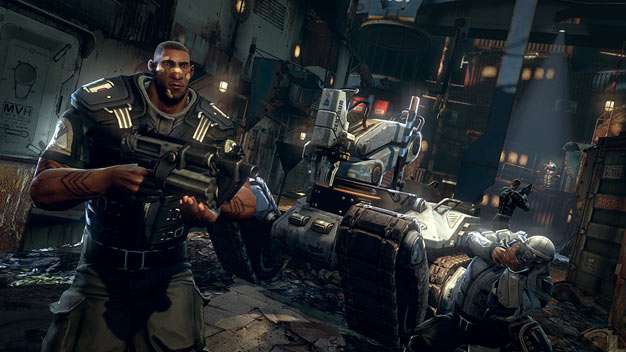 Using what the developers call SMART (Smooth Movement Across Random Terrain) the characters in Brink are able to vault over and slide under objects with the use of the same action button; the game analyzes the surrounding environment, knowing where players can go over and under. So, for example, by pointing the aim reticle at an area slightly below eye level, the game then knows (from a distance) the player wants to slide underneath and the action will be performed when the player gets close enough and hits the action button. It’s a neat feature that should allow for a steady flow of action and pace without the need for button combinations.

Going in, I knew nothing about Brink, and based on the trailer released just before E3, most likely nobody else did either. Walking out of the demo, I was blown away and that’s not some bullshit meant to push the buzz. Multiplayer games are usually a turn off for me since I’d rather get involved in a story and go about my business on my own terms. What Splash Damage and Bethesda look to be doing with Brink is bring multiplayer gaming to a new level without sacrificing the “typical” single-player experience. With the game not set to ship for Xbox 360, PS3 and PC until Spring 2010, there’s still plenty of information to be revealed on the classes, skills and multiplayer, but after seeing the game in action, it’s already safe to say, “Be excited.”