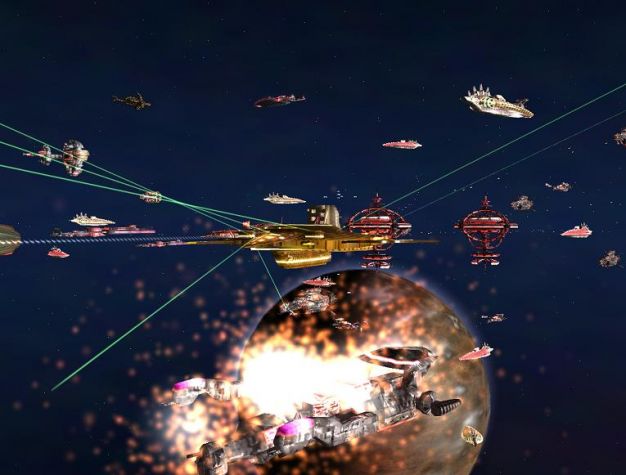 A universe that has yet to be explored, thousands of worlds spanning hundreds of stars and new constellations and heavenly bodies to investigate. It is here where billions of Earth’s exiles hope to find a new home. Here, as players fan out to stake claim and begin building their empire in what sounds like the ultimate MMORTS, the first ones on the scene can find and sell information to worm hole locations for light speed travel to far off untamed systems. Here players will control everything from political movements in a Galactic Senate, control multiple systems and trade routes with their guild or rise in every way they can to Emperor of their own star system and earn the right to vote on everything from game mechanics to future additions. This is Beyond Protocol, perhaps the most ambitious MMORTS ever conceived..

Beyond Protocol started out as a board game in 1991, but after test playing they realized that it had to be built for PC. Over the years Dark Sky Entertainment has kept working, using each new technological advancement to make Beyond Protocol a reality. It’s now in closed beta, set to release this November and TVGB was fortunate enough to get a look at where it stands now.

We didn’t get to see much that this game has to offer in graphics, though landscapes for planets are randomly generated and feature sunrises, sunsets, moving oceans and clouds and viewable constellations. Dark Sky promises “intense 3D graphics” with “cinematic video effects and scenery.” The real high points we got to see were in the depth of strategy and gameplay. Most RTS games have one gameplay element that overshadows the rest, but in Beyond Protocol they have strived to make research, war, diplomacy and trade games unto themselves.

There are 105 different minerals in the game allowing for a near infinite number of alloys and combinations. Using resources to build research facilities becomes important when new superb alloys can be discovered and then sold or used to build hulls. Ships are fully customizable from design and weapon placement to strengths and color schemes. Space stations can also be built and guilds can guide design and color for uniformity.

Battles in space are great. Entire armadas battle over planets, seeking cover behind space stations or moons. It can be confusing at first with so many ships going at it at once, but with so many choices in ship designs no two forces looked alike. Individual attack ships can be ordered to attack specialized targets. For example: fast fighters can be sent out and told to attack thrusters to make enemy ships dead in the sky or shield generators to make space stations more vulnerable to larger battle ships. Nearly everything in the battle we saw was on autopilot, but players can jump into their skirmishes to change commands and redirect forces on the fly.

Beyond Protocol will feature a full espionage system. Here players can attempt missions themselves, assigning troops and resources to foil the plans of rival empires or guilds. Some players may find this to be one of the best part and can specialize in the gaining and selling of information or hiring out for specific hit and run missions. There will be an in-game system for the buying and selling of information that protects buyers from getting false reports. When agents hit an installation and steal its secrets the file can be sent whole to the buyer.

Players can’t be online 24/7 (at least not the human ones), so what happens to all the hard work when players aren’t sitting in front of their PCs? Beyond Protocol has us covered. When logging off players can choose one site to give invincibility and the rest of their facilities continue production and research or follow battle engagement instructions. There will also be the option of setting up to get email alerts if being attacked. Players can also rest easy going on vacation or just taking time to play something else by putting their entire empire on invincibility. However, when this is done everything including research and development stops as well.

Fans of RTS games can look forward to an imensly interactive sci-fi experience and gamers that love micro managing every little detail will fall in love with Beyond Protocol; but casual gamers beware of a steep learning curve. Those who pre-order will get the bonus of access to the game a full 24hrs before the rest of the world, so if you want to explore and stake your claim first, you had better sign up soon.