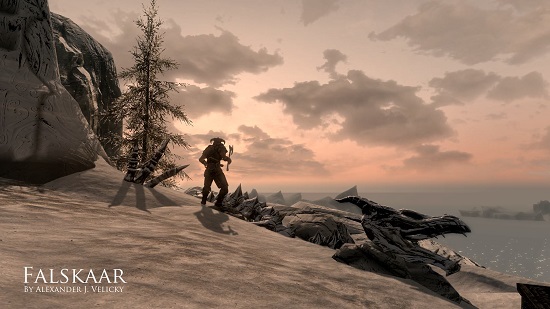 The developers at Bethesda may have announced that there will be no more new DLC for The Elder Scrolls V: Skyrim but the modding community is hearing none of it and is working tirelessly to add new content. Particularly 19 year-old Alexander J. Velicky who spent around a year on his “Falskaar” mod, which adds over 20 hours of new content, a new map that is the size of about three Skyrim holds (or around a third of the original map), 54 new characters played by 29 voice actors and several quests. The “Watervine Chasm” is especially noteworthy, taking three weeks to build and over an hour for players to fully complete.

“Falskaar” is available now over at Skyrim Nexus and includes new spells, a brand new Dragon Shout to learn, weapons and armour sets, and bard songs. The mod features an original soundtrack composed exclusively for “Falskaar” by Adamm Khuevrr.

Velicky admits that he is far from an expert, however he devoted so much time to “Falskaar” to prove his potential to Bethesda before he applies for a job with the company.

“The best way to show Bethesda Game Studios that I want a job there and should be hired is to create content that meets the standards of their incredible development team.”

If Bethesda doesn’t hire Velicky, some other company is sure to scoop up someone who has already proven the ability to create quality content and the leadership skills needed to organize a team to carry out his vision. Just imagine what he could do with the full support and tools of Bethesda Game Studios behind him.

About the author: Evvy Kube

When Evvy isn't practicing her gaming techniques, she is writing about videgames or creating and editing game videos. You can check out her videos on youtube (NLGvideos) or friend her on Facebook...  Read more...