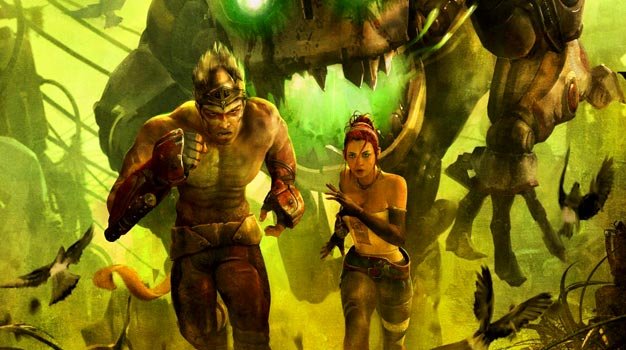 Ninja Theory and Namco Bandai have revealed the first details of their upcoming new IP, Enslaved.

Set in post-apocalyptic America, Enslaved puts you in control of Monkey, a “a strong and brutish loner” abducted by a mysterious slave ship. Accompanying Monkey is Trip, a young AI-controlled woman who, quickly realising she needs Monkey’s strength to escape her captors, links their Battle Royal-esque slave headbands so that “if she dies, he dies.”

An AI companion that gets you killed when she wanders off doing something stupid? Gulp. Let’s hope she’s smarter than Sheva, Alyx et al.

Assisting Ninja Theory behind the scenes is a pretty impressive list of talent. The makers of Heavenly Sword have once again enlisted the motion-capture acting skills of Andy Serkis (surely the ‘go-to’ man for all motion-capture work following his turns as Gollum and King Kong). Also on the team is Alex Garland, author of The Beach and scriptwriter of 28 Days Later.

Enslaved is set for release in 2010 and is being developed for both Xbox 360 and PlayStation 3.