DICE officially removed the wrapper on Battlefield 3’s singe-player campaign yesterday, and we were among the many packed in to watch the official unveil during a media event at GDC.

Patrick Bach, executive producer at DICE, played through about 15 minutes of the campaign on PC, which includes the scenes you’ll see in the trailer above. The initial scenes take place in 2014 in which U.S. marines battle an insurgency known as the PLR somewhere along the Iraqi/Iranian border. The unit first embarks on a rescue mission to save “Jackson’s” squad, last seen in the “bad part of town.”

The event focused largely on the power of BF3’s new Frostbite 2 engine. Until now, DICE mainly used tired buzzwords – “state-of-the-art” and “cutting-edge” – to  describe its new tech toy. But seeing it in action is believing. The animations and renderings are downright impressive, and the new engine is shaping up to have a huge impact on destruction, Battlefield’s middle name. 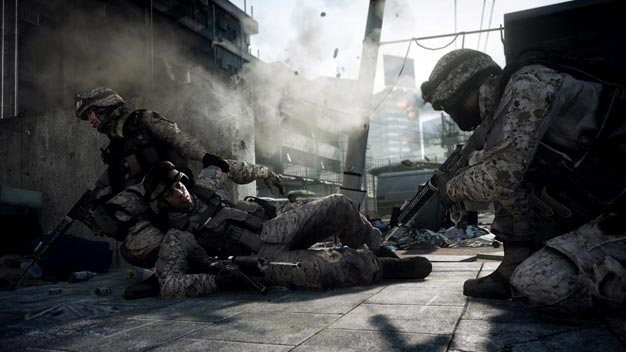 Following this scene, DICE showcased a character rooftop battle in which the unit advances to take out the same sniper that previously wreaked so much havoc.  The player advances to eventually fire an RPG at the building housing said sniper. The ensuing shockwave of destruction – crumpling steel, blown out windows, front implosion – left the crowd breathless.

The gameplay also seems to display a level of suspense that was hard to find in BFBC2 single-player. How this translates into narrative is yet to be seen.

Not a word was mentioned about multiplayer, but it’s likely DICE is aiming to first sell fans on single-player before getting into its bread and butter.

So far, Battlefield 3 looks amazing, and we can’t wait to see more.