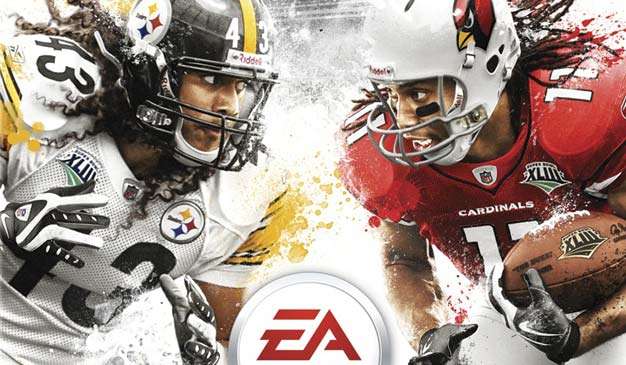 EA is doing something a little different this year. In order to emphasize Madden 10’s “Fight for Every Yard” theme, a pair of the NFL’s finest will appear on this year’s cover. Larry Fitzgerald, a wide receiver for the Cardinals, and Troy Polamalu, a safety for the Steelers, went head to head in last season’s Super Bowl and are both considered elite players at their respective positions.

In previous years, the Madden cover athlete would either an offensive or defensive player depending on the new features introduced that season. For example, when Madden 2005 introduced the Hit Stick for bone-crushing tackles, master intimidator and linebacker extraordinaire Ray Lewis appeared on the cover. The next season, the QB vision cone was the new feature and Eagles’ quarterback Donovan McNabb was the star.

With the cover split between offense and defense this year, I feel better about the gameplay tweaks not favoring one side of the ball, which should lead to a great game of football. Madden NFL 10 will be available on August 14, 2009.

A couple of trailers have been released as well. One shows off some of the new gameplay details for the Xbox 360 and PS3 versions 10 and the other introduces a unique visual style for the Wii version. First the Xbox 360/PS3 trailer:

It starts off like any old Madden trailer, but then we’re shown some neat gang tackling animations. In the past multiple player tackles were limited to two defenders each, but now we see 3, 4, and 5 guys jumping onto the ball carrier at once. Long gone are the days when we needed to wait for a break-tackle animation to stop before engaging the ball carrier with another defender. This is a welcome addition.

There also looks to be some new tackle breaking animations to give the running backs some love. I was enjoying it until “Fast” Willie Parker, a player known for his speed (really?) was shown powering through two defenders at once. This didn’t strike me as realistic, but I guess it wouldn’t be any fun if gang tackles were foolproof.

The other new feature EA is bragging about, the ability of the quarterback to step up in the pocket to avoid pressure, is not highlighted at all in the trailer. This comes as a disappointment to me, as all too often I find myself drifted farther and farther back in the pocket a la Dan Orlovsky before making a pass.

Now for the Wii trailer:

Noooooooo! EA has turned this game into a CARTOON. All the receivers are toothpicks and the running backs have ginormous shoulders! But the animations are still at least 3 years old. So basically all EA did was make the game look ridiculous without adding anything of substance. We don’t see any gang tackling in the footage, just rehashed animations being played out by freakish-looking caricatures. At the start of the trailer, EA Sports president Peter Moore says this is what “fun looks like” on the Wii. If you’re a Wii owner over the age of 14, you should probably take this as an insult.

A trailer can only show so much, but right now all I see is EA trying to appeal to the Wii “family” demographic by putting a new cartoon-like look on old gameplay. That’s going to seem cheap to me unless they reveal some new Wii-specific gameplay elements. Based on how all Moore mentioned in the trailer was the new visual style, I don’t see any gameplay enhancements as being likely.