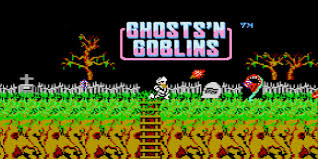 A classic you might have missed, Ghosts ‘N Goblins was a side-scrolling platform game from Capcom first released in arcades in the mid 1980’s. Since then it has been ported onto all manner of platforms, from the Commodore 64 right through to iOS and Android devices in 2017.

If you ask any big N fan what their favorite NES game was, very few would say Ghosts ‘N Goblins, and that makes me a little sad. It is a vastly underrated game. It was on the NES I first played this game. I got it shortly after my 9th birthday, all the way back in 1991.

In the game, you control a knight, called Sir Arthur (of course…). He slices and dices his enemies, of which there are plenty. Zombies, ogres, demons, cyclopes, dragons, and other monsters must be dispatched by Sir Arthur, who is on a mission to rescue a princess (sound familiar, Mario fans?), who has been kidnapped by Astaroth, king of the demon world.

Along the way, as you kill enemy after enemy, you pick up new weapons, bonuses, and extra suits of armour. You’ll need these too because the game is quite hard. Enemies spawn all over the place, randomly, and if you take 2 hits you lose your life. Your life goes down in stages too, even if you’re not taking hits. Lose all your lives, and you need to restart the level unless you’ve reached the halfway checkpoint.

Oh, and when you defeat the final boss, you are then hit with the realization the next, more difficult level setting has the actual final boss you need to defeat to beat the game.

Graphically, it is one of the better titles for the time period. Colours and shading are nice, there is a good array of backdrops and Sir Arthur moves around easily and quickly with very little input lag. It’s clearly dated now, of course, but the magic of games at that time is not held in graphics.

Music-wise, there is nothing spectacular there, either. It’s a fine mix of sounds and tempo and it keeps the game plodding along nicely. It immerses you in the game and does a solid job. It’s never going to win prizes or be in top 10 lists, though.

Overall, the game is a must-play. It’s such a simple concept with simple controls you find yourself more immersed in the game. I found I could easily lose an hour or two, even now (I have it on the Nintendo NES Classic).

If you’re looking for a fun retro game to play I’d encourage you to give this a try. If you don’t have an original NES or a Classic, you can play Ghosts ‘N Goblins on Nintendo Switch, Android or iOs devices.

Here’s a quick gameplay video to get you started: