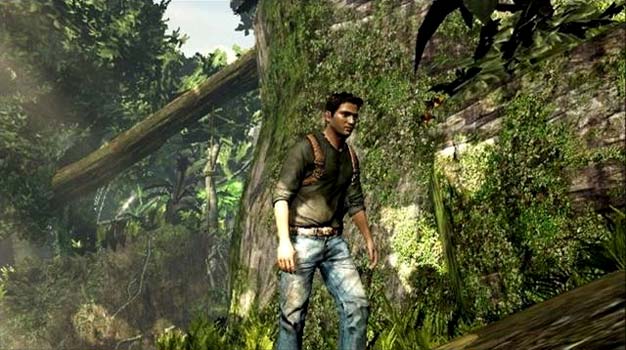 Sony used GDC to put on a tech demo of Uncharted on NGP. A similar demo has been circulating since late January, but we jumped at the chance to see it firsthand.

Frank Simon, senior producer at SCEA, spent about 10 minutes demonstrating how NGP’s touch screen, motion sensing and dual analog could translate into Uncharted gameplay. Keep in mind, the demo is merely a way for Sony to illustrate what the NGP can do, not what actual gameplay will look like.

Simon didn’t specifically discuss Uncharted’s graphics on NGP,  and he didn’t need to. The visuals  popped out of the screen despite being filtered through a grainy projector.  By the numbers, Sony disclosed that NGP will sport about half the resolution of a PS3 at 960×544 pixels and twice as much as a PSP (480×272).

Swiping up on the front touch screen causes Nathan to leap over objects. NGP seemed to respond well to all touches without noticeable lag.

Sony spent some time highlighting the back touch panel, which looks to lend quite a few options for developers. In Uncharted, swiping on the back panel helps Drake shimmy up a rope. An important functional aspect of the back touch panel allows for touch screen gaming without those pesky fingers covering important screen space.

In combat, the front touch panel was shown by tapping enemies to deliver a series of punches and quickly swiping to deliver a drop kick. Pinching zoom also triggers scopes during gunfights. The front camera was also utilized to shoot in-game photos and add to Drake’s journal.

Although some features looked promising, it’s hard to imagine touch gameplay working well in a game like Uncharted. As cool as touch functionality on a PSP may seem, Sony will have to walk a fine line to ensure touch gameplay doesn’t come off as forced.

The real Uncharted for NGP is in development by Sony Bend, and real NGPs are expected to first hit shelves during “holiday 2011.”