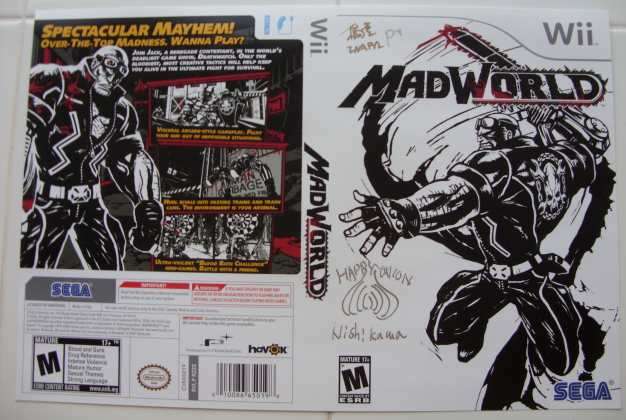 MadWorld has been out for a few weeks now, but with our busy schedules and being really, really important we haven’t gotten a review up yet. We do however have the cover sleeve for the game autographed by Astsushi Inabara and Shigenori Nishikawa. Those two are the guys behind the game as you can clearly see here from our interesting interview of interest.

The problem here is that a cover for a game you don’t own is kind of pointless, though still nice, we suppose. However, we don’t want someone who hasn’t played the game getting this, so in the spirit of that, and since we haven’t reviewed it ourselves, we’re giving it for a review. With the recent news that a decent but modest 66,000 copies of the game had sold in the game’s first month we’re also hoping to drive that number up a bit. You know, doing our small part to reward developers that take risks on the Wii. So if you don’t have the game yet go out and buy it, then review the game below in our comments. It can be one sentence, it can be an full fledged review, just make it good. The winner will receive the signed cover slip in his mail. Good writing!

And no, we have no idea what a happy onion is.

Giveaway has ended, the winner contacted.