The Aliens vs. Predator franchise has a long and storied history. In fact any game that started its life on the Atari Jaguar and is still around to talk about it has gone through something interesting. The original game is a bit of a cult classic, with some of the best and varied gameplay one can find in an FPS. Rebellion did a brilliant job with it, and then left. The franchise sort of went downhill from there, with sequels being good, but not great and move spin-offs that disappointed to an extent that I was pretty sure we wouldn’t be getting anything good out of the franchise for a long time to come.

Enter Rebellion once again. The developer has picked up the franchise and is looking to bring the series back to its horror/shooter/brawler roots. We were able to get some hands-on time with the Predator side of the game, and also view some behind closed doors action of the human campaign. In case you didn’t know, Aliens vs. Predator is broken into three campaigns whose stories intersect at different times. Sadly, the Alien campaign is still under wraps, but having seen the other two it’s looking good. 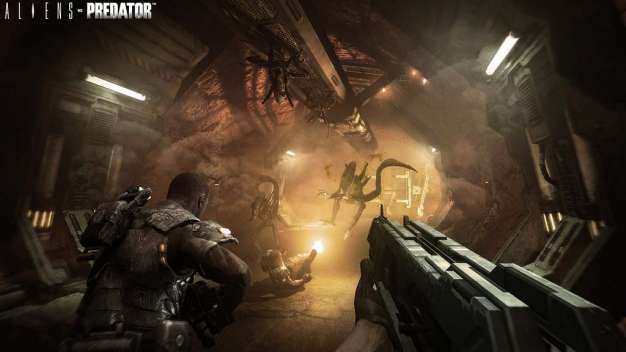 On the show floor we got some time with everyone’s favorite cloaking alien, the Predator. The Predator is probably the most powerful of the three campaigns and his gameplay focuses not just on shooting, but also on stealth and hand-to-hand combat. Playing through the demo level I got to take on both Aliens and humans in some pretty rough action. The game felt great, especially using the Predators hand-claw weapons and taking out Aliens with them. It looks like the devs took some hints from The Chronicles of Riddick in order to get the hand-to-hand stuff down, but the demo didn’t have enough action to really tell if it will work over a long period of time or if the shooting/punching combination will simply not work together.

Since the Predator is a powerhouse, his side of the game will clearly play a bit differently from the rest. It was clear in the demo that he was tearing through things far more than the humans will be. In fact the Predator, while stealthy with that cloak, takes on way more Aliens one-on-one whereas from what I saw the human side of the campaign is more about strategy and being scared out of your mind. The devs even mentioned that the two gameplay modes have very different feels. 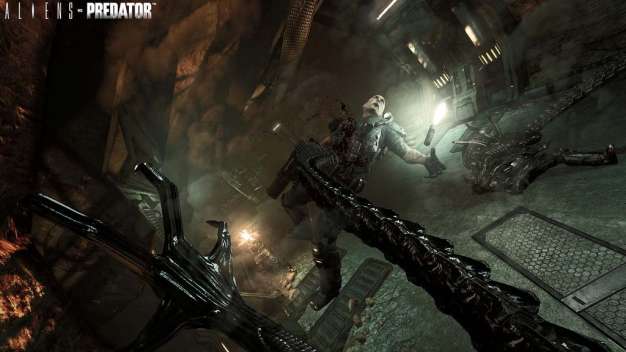 That was clearly the case once I got to see the human side of the battle. Players take on the role of a rookie marine who has landed on a planet where a Predator pyramid has been discovered. Of course things go wrong the moment they land and everyone starts to get killed from every which way. Since the humans are the weakest of the three races, it looked like that branch of the game was going to almost be geared more towards the horror genre than the FPS. Don’t get me wrong, we saw plenty of bullets flying and Aliens getting killed, but a big chunk was devoted to building some amazing tension and using the shadows and lighting that the series is so well known for.

The team has worked hard on making the lighting as dramatic as possible. At one point a flare was thrown out so that we could see how great the shadows it cast looked. The light and dark gameplay from the original is one of the things that set it apart and it looks to be making a pretty amazing return here. The best part about the original Aliens vs. Predator game (and the good ones that followed it) was the variety in the gameplay and the high quality of each section. It looks like Rebellion is bringing that again with some solid gameplay, scary setting and, of course, the ability to destroy everyone and everything as the most badass hunter in the universe.