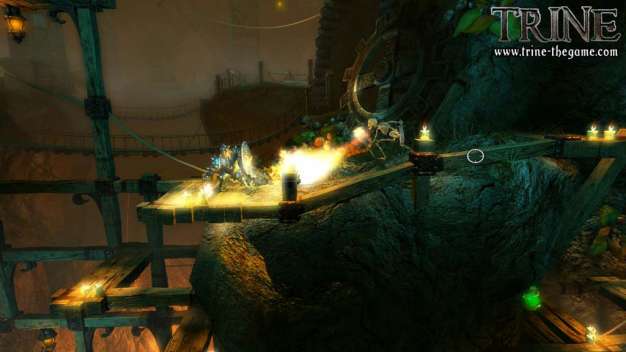 Here’s a game where the PR guy had to actually remind me that the presentation was over, and it was time to move on. The first and only time this really happened my entire time spent on the E3 show floor. It’s hard for me to pin down what exactly was my favorite game that I got to spend some hands-on time with, but this is easily a contender in the top two if nothing else.

Trine is a side-scrolling fantasy action game that seems to have equal parts’ influence from Gauntlet and LittleBigPlanet. So you have the objective of battling your way through medieval ghouls and monsters that threaten the splendor of the mighty kingdom, but you also have 3D side-scrolling environments that call upon some creative manipulations of physics in navigating them. The game is being developed by Frozenbyte, and is being published by Atlus for the Xbox 360, and by Nobilis for PC and PlayStation 3. Also, the game is, if you didn’t get the sense, damned fun.

The game gives you a choice between three different character types: the Knight, the Thief, and the Wizard. The Knight is pretty much what you’d expect of him. He’s the brawler that’s there to knock out enemies with ease, but doesn’t contribute as much in the navigation department. The Thief can use her whip to swing across gaps and also has some great agility for getting around. While she isn’t the strongest in combat, she does possess a bow for long-ranged attacking. The Wizard has no fireball. That’s right, a true first in gaming. According to the game’s official web site, the explanation for this is he “never quite passed the wizarding exam.” It’s easily forgiven, though, when you find that he’s able to manipulate parts of levels that are key in moving forward, and that he’s able to conjure objects that can both help himself and his cohorts get around, or leave a painful drop on enemies. From what I saw, the designers did a great job of making each character equally valuable, and so when a successfully organized 3-player coop game is in effect, I can imagine it being an absolute blast. Having said that, the game can still be enjoyed in single-player, as you can switch characters on the fly.

I only got ten minutes with the game, but in that ten minutes, I found that I really liked being the Thief, that I could help my teammate by thinking logically about a scenario and what physics would have to say on a matter (I shot an arrow at a teetering platform to give way for my Knight pal to get to where I was), and that you feel like a crack shot with the bow in no time thanks to some fantastic controls. The wizard is also fun, and brings out a bit of creativity in you as you imagine how a board or block can help in a given situation, or what remote objects the wizard might be able to control. And the knight, while the least interesting, is classic in his ability to rock multiple enemies at any given time. What will decide if this game is truly great is how the rest of the levels play out. Hopefully Frozenbyte put the time in to make a well-paced and fresh experience from level to level. Very very hopeful, in fact.

It was ten minutes too many, to be honest. It serves as a springboard for what will doubtless be more time with the game, and I absolutely cannot wait. This little downloadable may be one that just should not be missed. There is no set release date on the game. “Soon” is all you’ll see on the official site. Soon is not soon enough.